I thought it may he good to have a feed where we could share any tips and tricks to do with any of the Grid Connect Range being Arlec, Deta, Verve, Orion.

I am learning from trial and error and really just accident so sharing with others and sharing back we may be able to create some good learning information for us all.

Please post below starting with what the trick is as the title then how to do so as the body of information.

How to manually turn on Arlec Globes when they have been turned off in the App.

If you would like to turn on your arlec globes by the switch when they have been  turned off within the app and the light switch is still in the on position simply turn the switch off for 2 seconds then back on again and there you go the lights will come on.

Light globes holding colour, brightness when turned off by app or light switch.

So you can use the light globes as normal globes as you wish with standard 230V switches but with the added advantage of being able to change the white colour or RGB, dim them, automate or set timmers and scenes along with using your phone as a remote to turn control them from any location if they are powered on through the switch.

Love your work and community spirit @CSParnell! I trust this discussion will be helpful for many of our members.

I have come across what looks like a software glitch within the ability to run GU10 globes and B22 globes in an automated countdown scene triggered by a battery operated motion sensor.

First off the GU10 globes have a built in software timer function within scenes, B22's, E27,E14's do not they have a countdown outside of scene which is a one shot countdown only.

The purpose of running a delay (timer) function of globes in scenes on a motion sensor is so you can walk into a room have the lights turn on automatically and then after a set time the lights turn off or perform another command.

So what's the glitch? With the 2 different globes combined the delay function becomes unstable and can turn the globes off anywhere from 5sec through to the set time of 5min and anything inbetween.

The following scenarios were trialled:

Grouping the globes and running commands as a group.

Running the GU10s under 1 scene and the B22 under another scene off the same motion sensor.

All of the above gave the same output.

The resolution was adding another motion sensor to the B22 and separation the 2 different types of globes.

The B22 runs on a delay (timer) function whilst the GU10s run on the inbuilt timer function.

These motion sensor are very effective there is just some software bugs.

Since writing and posting this post this morning I am in the laundry trying to do some washing and the B22 globe is on off, on off like a disco the motion sensor is not holding the delay timer at all even on a single globe. I will contact Alrec again to see if they are wanting to respond this time I will see if I can get a resolution for all.

Below is the automation chain to overcome the blinking light associated to this sensor and certain globes / light fittings without built-in timer function.

How to configure Tap-to-Run and Automation? 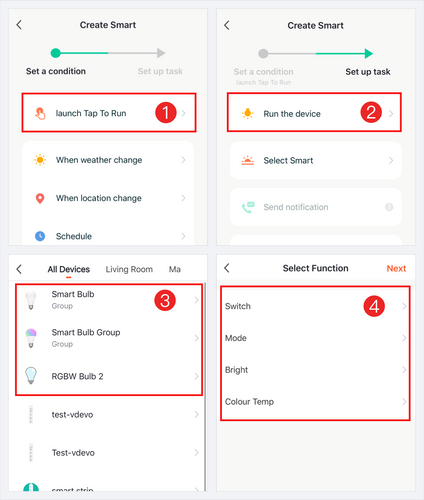 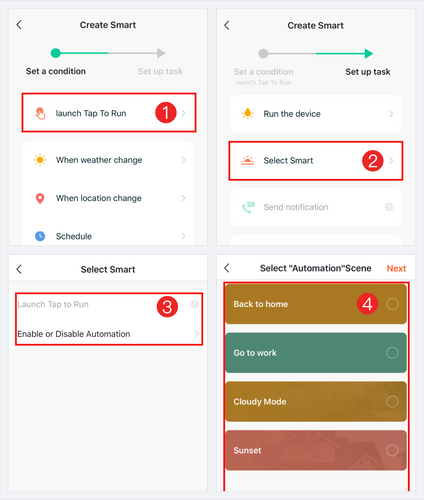 Delay: add a delayed task.
For example: you can add a delay task in Tap-to-Run between two devices actions. 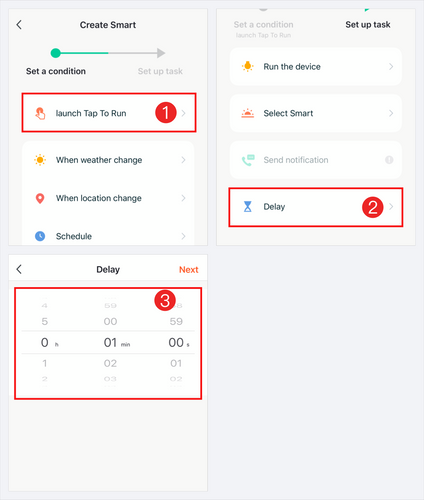 Automation
There are four main types of automation are supported in the app. You can set up automation to fully use the home devices and start your smart life.
When the weather changes: The linkage between external environment conditions and the smart devices, the following external environment conditions can be selected.
For example, you can set ‘when the temperature is higher than 29℃, turn on the air conditioner.’ 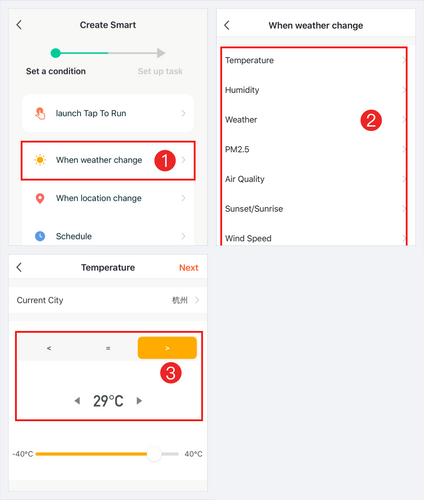 When the location changes: The linkage between the geographic location and the device.
For example, you can set ‘turn on the air conditioner and water heater automatically when you are near the house, or turn off all home appliances and turn on motion detection function of the camera when you leave the house.’ 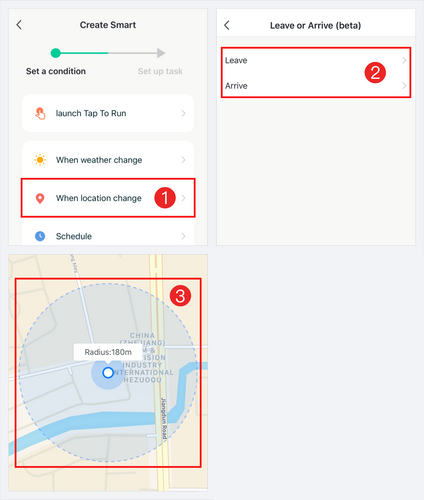 Schedule: The linkage between schedule function and the devices.
For example, you can set ‘open the curtain at 8am on working days.’ 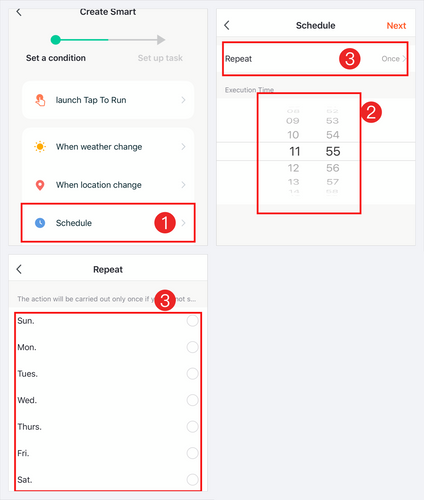 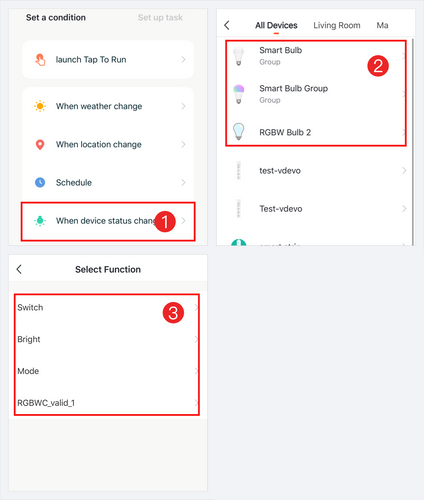 When setting up your automations right down the very bottom you have an active period selection, click on that and you have some options from there you have an array of choices that are self explaining.

Thanks for sharing that handy tip, I was always under the impression that the lights had to be individually programmed to do this. But the grouping command will definitely make it so much easier.

So I purchased one of these universal IR devices with intentions to have our main room A/C turn on for cold or hot mornings before we wake up based on time and also temperature with the grid connect temp sensor.

So at first it seemed fairly straight forward to setup the Kelvinator remote, I select the type of remote, the brand of A/C unit and then quick or manual.

I tried quick but that didn't seem to pick it up and it moved to the next step where it needs to recognise 3 buttons on your phone and then you hit yes and bingo..... well not so fast.

The unit was coming on and I could change settings and turn it off but the head unit display was not coming on.

I thought oh well let's try automation then but the ON command would not work but the OFF would in an automated chain.

So I proceeded to manual programming which took about 20min and then tried it again and no luck same issue.

I deleted the control from grid connect and then added it again  going for the 3 button method and once I found one that worked I tried it, the display on the head unit came on so that was advancement. Next automation.

I set back up my chain minus the temp sensor going for KISS method first and Bingo A/C on at a set time and off at a delay time..

So I added the temp sensor back in at if less than 20deg C and made sure it was set to all conditions met so that it had to be the time and less that 20deg not the time or less than 20deg and Bingo the automation chain worked.

This universal IR has a huge amount of brands programmed in it just might take a couple of tries to set it up right to be patient. 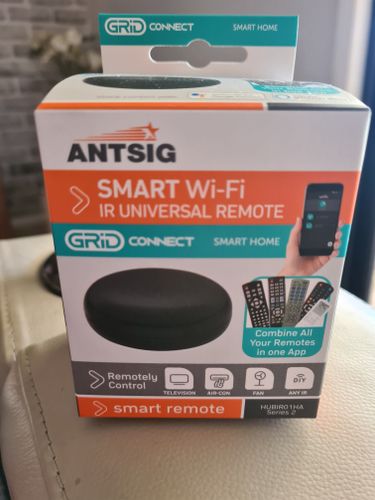 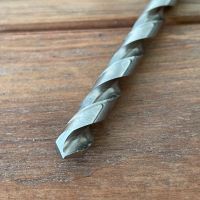 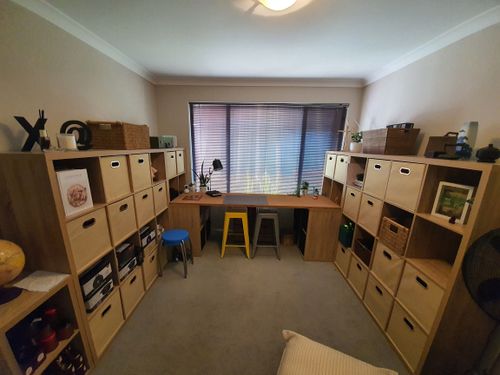