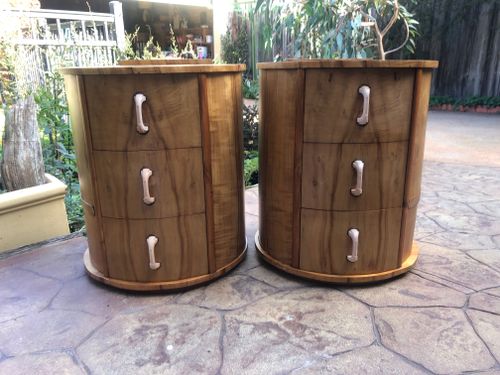 I wanted some new bedside tables, and when I saw this ratty old dressing table for sale online, I knew that it had the potential to become just what I wanted. 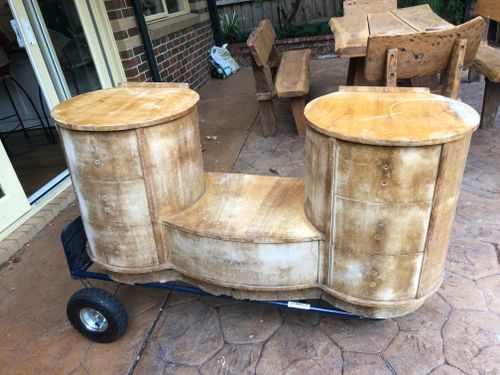 The first step was separating the parts, the base skirting was very damaged, so I completely removed it, salvaging as much of the useable veneer as possible. The centre unit was tricky, having been glued and nailed in place, but with a lot of patient prising it eventually came away leaving me with 3 separate pieces.

Where the centre piece joined the two banks of drawers, there was no side, just a big gap.  On both drawer units there was also a slit in the veneer about a third from the top towards the back.  I had some salvaged old plywood that was a similar colour to the veneer, and was flexible enough to be bent to fit the sides.  It took a bit of time and fiddling to get it all lined up, but it was worth it.  To cover the join between the old and new pieces and also to cover the slits, I made some detail pieces from the salvaged skirting veneer and glued them in place.

I found some vintage Bakelite handles online, they are a little larger than the original holes, so I filled the old holes and drilled new ones.
Both units had loose and lifting veneer, so before I could sand them, I had to spend a considerable amount of time glueing down lifted pieces and replacing damaged or lost pieces, luckily the salvaged skirting had enough useable material to do this.

Finally I could start carefully sanding, using 240 grit.  Just enough to clean off the old finish, but not damage the fragile veneer.

The drawers themselves were in good solid condition and just needed cleaning up.

I’ve finished the units with 2 coats of oil based varnish for a tough wearing finish and then installed the new/old handles.

I was pretty happy with how my new bedsides look 😊

Welcome to the Bunnings Workshop community @kmwatts. It's brilliant to have you join us, and many thanks for sharing this wonderful project.

I really love how you've gone to the effort of staying true to the original design of these cabinets whilst restoring them. It would have been tempting to paint them, but the lovely timber grain is undoubtedly worth retaining, and you have done a spectacular job of that. Not burning through the veneer is an achievement in itself.

Those period-correct bakelite handles finish this project nicely—well-done restoring this unit whilst also giving it a new life.

"I saw this ratty old dressing table for sale online"

The end result looks great. Certainly an interesting piece of furniture. Would there have been an array of mirrors at the back at some point in its history? 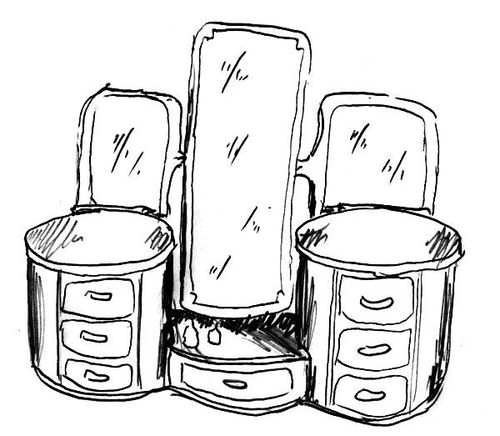 Thanks 😊 yes there would have originally been mirrors at the back, but they were long gone by the time the dressing table came to me.  I didn’t mind though, I really prefer to get pieces that are in very poor condition, I wouldn’t have had the heart to pull it all apart if it was still reasonably good.

Side table with terrazzo top and Tasmanian Oak dowels

10 ways to bring Hamptons style to your home

How to lime wash timber furniture

How do you match paint colours?

The process for colour matching is actually not that difficult. In order to get an accurate or similar shade of colour, it will require a paint sampl ...