How do you get your kids into D.I.Y.? 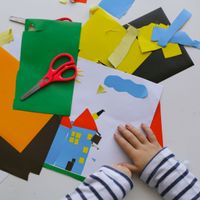 Obviously the key is to make it fun.

The Bunnings teams have created videos of projects that should provide some inspiration and ideas. Some of the projects featured include making play tents, soccer goals, puppets, masks, worm farms, garden pots, toys and games. - Jason

I find kids absolutely love planting seeds and watching them grow. Succulents are also great. You can also buy little terracotta pots really cheaply and get the kids to decorate and/or paint them.

I lalso ike this idea for a kids birthday party. First half of the party could be making the cars, second half the drive-in movie. - Isobel

I reckon a good old fashioned cubby house is a brilliant project to get the kids into D.I.Y. Get them involved right from the start, creating plans and salvaging materials, then introduce them to the tools. - Mick

A billy cart is another classic project. - Kermit

My boys love the garden, especially my oldest son. I can't pull my boots on without offers of help.  I think the key was getting them involved really young. Letting them play in the dirt as I worked while they were babies. Getting them picking fruit for themselves. Planting seeds with them and watching them grow. Letting them water the garden despite the significant waste that inevitably occurs. - timjeffries

I find that if you can relate the DIY project to stuff they like, then you'll have no problems in getting them involved. At the moment I've got my boys interested in building skate ramps and stuff.  They love going to the skate park and this is something they can do related to that when they're home that keeps them off the electronics. I've got them currently researching on YouTube how to make skateboards themselves.  Might have a go at making a longboard. - Dale

I'm a classic case of a kid being allowed to have a go and although it was 60 years ago, it's still a fond memory. Dad was going to paint our kitchen cupboard doors, he'd laid them out on the back lawn and my big brother was the designated helper. I was only 6, so I wasn't asked to give a hand. I was dying to have a go and it became clear that my big brother was doing it under sufferance. Dad saw that I was busting to have a go, so he found a little paint brush, & let me try the inside of a door. I still remember the smile on his face when he saw what I'd done, he gave me the bigger paint brush that my brother had left behind and I was allowed to paint the front of the doors with my hero Dad. Lesson to all, some kids won't be interested, so don't force it, but let the one that wants to have a go, have a go, it could become a wonderful memory for you both. - Andy_Mann

Something like this would be easy to do with the kids and they would love it. You often see entertainment units like these at op shops going very cheap. - RenoQueen

These window sill kits are great for kids as the seeds grow very quickly and easily. - greygardener

Thought this would be a good one to do with boys. The road is painted cement. I would have loved it as a kid - I used to spend a lot of time in the dirt making tracks for my Matchbox cars. - MartyH

Labels:
64 Views
0 Likes
Like
Version History
Last update:
a month ago
Updated by: