Experienced Bunnings Workshop community member Tom is so passionate about getting on the tools every day that he chose a job based on its early finishing time.

As a postman, his day starts before the sun is up. By early afternoon, he’ll be strapping on his tool belt or “pottering around the house looking for the next job to be done”. 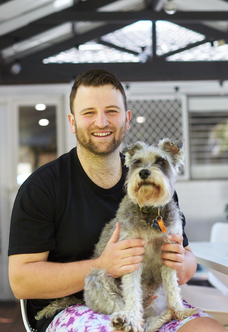 Tom is working on his house that's in "serious need of some love and updating"Tom developed his passion as a youngster. From the age of 10, Tom helped his plumber father complete odd jobs around the house. Out of high school, Tom developed his own interest in D.I.Y. after spending time working on a farm.

“It was just me and the farmer that I was working for. If something needed to be fixed or a fence needed to be built, we had to do it all ourselves.”

Now Tom lives by the coast in Perth with his fiancé Caro, four-month-old son and miniature schnoodle Archie.

“I cranked my D.I.Y. ambitions into top gear when my fiancé and I bought a 70s duplex half in serious need of some love and updating.”

Building on his craft

Tom describes himself as a jack of all trades. “I’m passionate about learning new skills and tackling as many projects as I can in the spirit of D.I.Y.”

He reckons there’s so much to love about D.I.Y. that it’s hard to “nail down” what he enjoys the most. “It’s a combination of the sense of accomplishment that comes from starting and completing a project with your own abilities as well as the opportunity to learn new skills and improve on your craft.”

His approach to learning new skills has been largely “needs based”. The old wooden gate at their place needed to be replaced, so he researched, designed and built one himself.

“As the projects I tackled became more complex, my tool kit grew to accommodate, and from there my skillset and the number of tools filling my shed has continued to grow.” 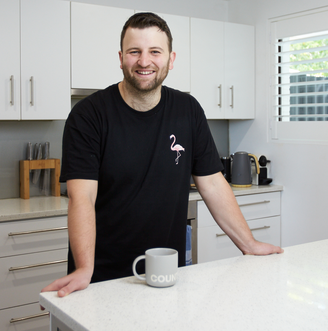 Tom loves exchanging ideas and solutions in a community

Tom reckons Bunnings Workshop is a great place to “find reassurance that you are capable of tackling D.I.Y. projects and find solutions when you run into the inevitable hiccups.”

If he can’t solve a challenge through his own research, he’ll “ask anyone and everyone that will listen”. If he’s still unsure, he’s “not too proud to call in the professionals for help, especially when a task seems as though it could be dangerous if not done properly.”

Tom’s popular projects include a kitchen overhaul at his in-laws' rental unit and his bathroom refresh. He transformed the peach-and-blue-themed 70s bathroom with a new benchtop, shower screen, sink, tapware and cabinetry, and painted over the wall and floor tiles.

His favourite project so far was building a low-level deck and pergola. “It has had such a huge impact on our home”.

“Part of the motivation for buying our house was the size of the backyard as we had been living in units previously. To maximise our use of the outdoor space, we needed to build a covered area so that we could furnish it and turn it into the main entertaining area, and enjoy the outdoors year-round.”

“The biggest thing I learnt during this project is that D.I.Y. doesn’t mean that you can’t have other people help. In fact, having other people to bounce ideas off increases the odds that you will overcome any potential problems quickly and easily.” 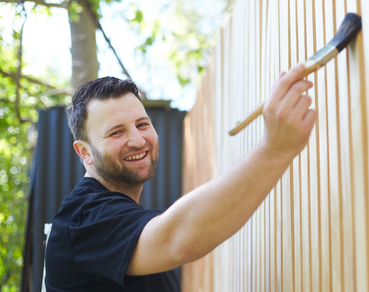 Tom and Caro turned the backyard into their main entertaining space

If time and money were no object, Tom’s next project would be a large, covered deck in the top half of his backyard. But he’s more likely to be tidying up areas of the backyard that adjoin his current deck, including laying turf and building a fence above the retaining wall to keep Archie from escaping to the neighbours.

His go-to tool lately has been his angle grinder. “While it is an intimidating tool, it has allowed me to get more creative with my use of metal and has been a huge help in demolition work.” He could spend hours in the tool aisles at Bunnings “creating mental lists” of all the tools he’d love to own.

“Measure twice, cut once” is the “obvious” but best advice Tom has been given. “It highlights the importance of planning for every project. The success of a project is determined by how well you have prepared.”