“I love being able to put my own creative flair on the products I build,” says Marty York.

Marty's backyard pallet wood projects have become both his “creative outlet” and his “form of relaxation”. And his creations are becoming so popular they might soon move from hobby to full-time enterprise.

Known as Yorky88 in the Workshop community, Marty says he hopes to grow his business That’s Palletable into a full time job (including a couple of employees) by the end of next year. Not bad for a sideline he started just two years ago. 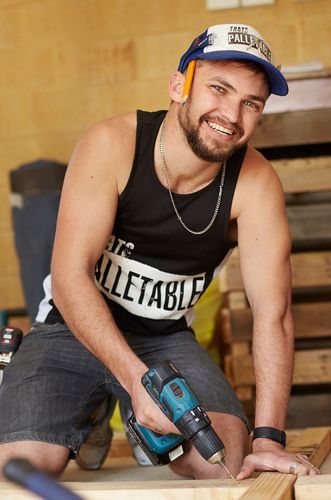 Marty York has always been handy.

Marty, who is 29 years old and has two young boys with his wife Catherine, currently works at a school for at risk-youth. Part of his role includes teaching woodwork, which was one of the subjects at school he most enjoyed.

“I didn’t really do very well at school when it came to sitting behind a desk,” Marty admits. “But when it came to the practical subjects like woodwork, metalwork, tech drawing and art, I excelled. I have always been very handy and so watching my family building stuff inspired me to give it a crack and now I’m addicted.”

Marty’s father was a blacksmith and he also learned skills from uncles who did woodwork.

“My D.I.Y. knowledge and skill is mostly self-taught, however I do have to acknowledge my high school woodwork teachers and also my Dad for taking the time and sharing their skills and knowledge with me.

“Anything I don’t know now I research either by asking people, reading or (my favourite option) watching YouTube clips. I also learn a lot through making mistakes and working out ways to fix them or just by hindsight seeing ways or things to add to make it better.”

Marty estimates he has had close to 100 jobs despite his relatively young age. He first started building items out of wooden pallets after seeing a shipping crate listed on classified site Gumtree.

“I didn’t really know what I could do with it, but I bought it anyway. After a couple of days taking up room in my garage, I cut it into three sections and turned each section into a planter box.

“So one big box became three smaller boxes and I sold all three boxes for $250. I thought to myself ‘That’s all right!’ so I started picking up pallets and making planter boxes and selling them on Gumtree. Then people started asking for other items and it has escalated ever since, which is great.”

He now sources most of his pallets from the likes of Bunnings, shipping companies and building sites… “with permission of course!”

Marty, who can draw or build almost anything just by looking at a picture, says his two biggest sellers have been his planter boxes and outdoor mud kitchens for kids. But one of his favourite projects recently was building a dining table and chairs in under five hours recently for a family dinner.  “I was able to do half of the build with my Dad, which was great.

“My other favourite build was an arts and crafts table that I built recently for a colleague’s grandson. It was a challenge but turned out really well.”

Next on Marty’s list is a cubby house for his boys and a storage shed so he can free up space in the garage, which serves as his real-life workshop. “Half of my driveway is also taken up by my pallet stockpile, much to my wife’s displeasure.”

His garage has recycled timber shelving and two work benches which Marty built from scratch with no plans. “One is my dropsaw station and holds all my power tools and some of my hand tools and electrical cables on the shadow boards on either sides my cabinet. I have a Triton table saw, Makita 305mm drop saw and an old planer table that was my Grandads before he passed away. It has been in the family for a very long time.

“It’s a long way from where I have come from. I started out with just a Makita jigsaw that I borrowed from my Dad. I have worked my way up, only spending money on new tools that I have earned from selling products I have built.” 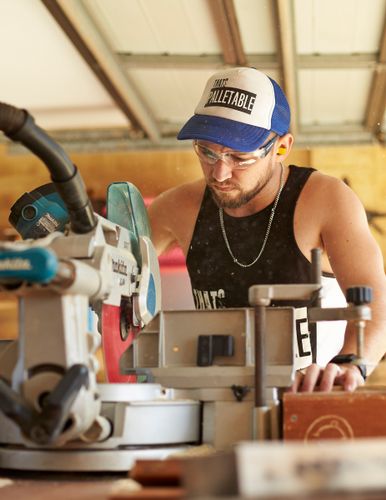 Marty says his favourite tools are his drop saw as well as his jigsaw and drills, and when in Bunnings he tends to spend most time in the tool shop “trying to figure out what Makita product I should buy next”.

In addition to spending time with family and friends, Marty enjoys camping, fishing and hunting. “I also enjoy going to a day spa and getting full body massage every now and then!”

Marty says he first discovered the Workshop community after receiving an email invite. “It’s pretty cool. I love seeing what other people are up to and being able to share my work.”

He also values the community aspect of being able to swap advice. When he hits a snag on a project, Marty says he usually tries to move onto another part of the built while thinking about ways to fix the issue. “If I can’t work out what to do, I'll either YouTube it or I'll call someone I know who might be able to give me some tips on how to fix it.”

The best piece of D.I.Y. advice Marty has ever received? “Mistakes aren’t a bad thing as long as you can learn from them.” Marty adds that his story shows anyone can D.I.Y.

“I have no woodwork trade background. I just love playing around and seeing if I can make it work. Nine times out of ten it does work out, which is great.

“I get a kick out of completing a build when you start with no plans, just going off a picture and it all comes together. It’s very satisfying. I love a challenge.”

Getting creative and building confidence