Any bonsai enthusiasts with knowledge, please weigh in.

UPDATE!! Have repotted into dry sandy soil with some coir and small dolomite gravel - that's a magic mix for my succulents. I won't water for another week. Doing well, however I've decided to grow it in bonsai shaping style, NOT repeat NOT as a bonsai. This piece has five main trunks, (see pic), and looks magic as a forest group after some trimming. I've roped it to stakes to pull it into balance, and support until it roots through the new medium.

QUESTION: I've started to wire it, as I've wired some portulacaria afra before. I don't make bonsai, I make bonsai shapes, because I have an oriental style garden. I've done it with plants in the garden too - what I don't know is roughly how long it will take a  crassula of this size to 'set' the new shape into the branch. Portulacaria seemed to be two to three months or so, however the branches are a lot thinner than this - should I wait longer and wire a little more loosely to allow for branch expansion? I've never wired such a HUGE succulent before. I know the portulacaria benefitted from a looser wiring anyway, so as not to snap branches - any thoughts? Anyone with expertise?

HELP, if you can...pretty please!

My wonderful neighbour gave me a crassula ovata Hummel's sunset - only problem is, it's 4ft wide around (well over a metre, heading for two) and 3 and a half ft tall ( around a metre and a half) - a lovely ball of leaves on MASSIVE trunks - how the heck do I get it out of the daggy plastic pot and into a new ceramic one?

I'm not going up in pot size by more than 3cm, and it's only slightly deeper. Practically speaking, I know there will be some damage, no matter how many helpers I can get. It was already damaged a little getting it here, and I've planted those three bits, (about a foot tall, each).

I wonder if there's a technique, though? My idea was to wrap the top in an old sheet and try tipping it to one side to pull the old pot off - anyone have ideas? We are talking low-tech - much as I would like one, I don't have a small winch to lift it in order to free the pot. I can't get close to the pot to cut it either, not without causing excessive damage to the plant.

Any suggestions gratefully received - especially from anyone who`s done anything similar!

I think I would just cut the pot off with a combination of shears and a saw. I think I would try to get a much bigger pot to go up to though... Or consider planting it in the garden? Is that an option @Former Workshop member?

Hi Isobel!
well... another neighbour and I decided to bite the bullet and "have at it", this morning... Unfortunately no room in the garden as I have a cacti and succulent obsession already, lol.
We wrapped it in a moving blanket, tipped it over, and busted up the (thankfully) plastic pot with a baby pick-axe I happened to buy from Bunnings a few days ago. I've been using it non stop, actually for various things.
So, it had a bazillion main trunks and was just gonna be too top heavy, even in a weighted pot. We decided to cut it into quarters - I gave her a piece as a thank you, cuz it just would have been too many pieces for me. The rear yard is smallish with concrete and containers, plus veggie beds etc. So it had to go in pots. I'm trying to figure out how to load these pics... these are roughly quarter pieces - there was a big rotted root it the centre, so I had to slice around. middle pic is one of the small pieces that broke off in the initial move a couple of months back - looks nice with the dusty miller. You can see how gigantic it was - we were sorry to bust it up! 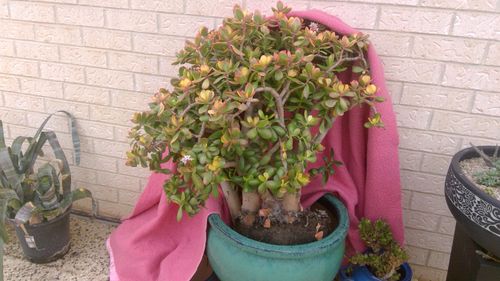 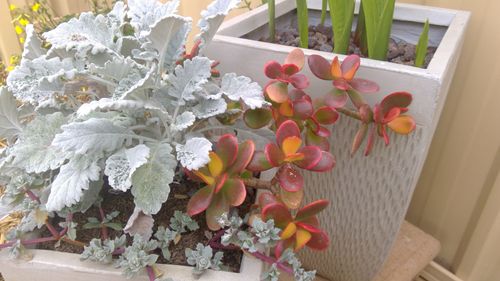 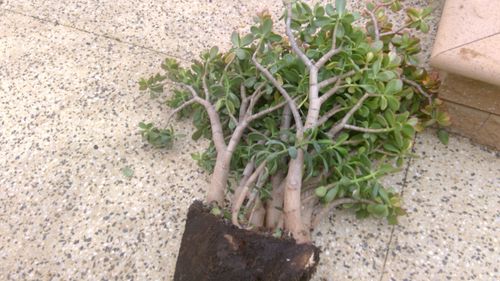 To include images on your post, make sure you hit the reply button on my post so you get access to the full text editor. Then you can either click on the Photos button above the text box or the big Upload Images button below.

Please let me know if you have any trouble. We are looking forward to seeing your photos.

Thanks Jason - read the help files! Got it!

By the way - for those reading through - crassula are like most cacti and many succulents - they prefer to be pot bound, so don't go up by much when potting on, if you can avoid it. just a little bit bigger will do for another two to three years at least depending on growth rates, but they'll usually adjust to what they're given. I'm dreading these pieces I'm left with going on the gallop because I originally intended to move it in it's entirety, and now the original pot I had is way too big, and these smaller (still big, see pic) ceramic pots are too big to restrict the growth so much. Lol - I probably created a monster. My Mum got the other piece, so I'm just left with two, but I'm only working on the one at the minute re the update in OP.