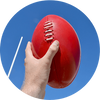 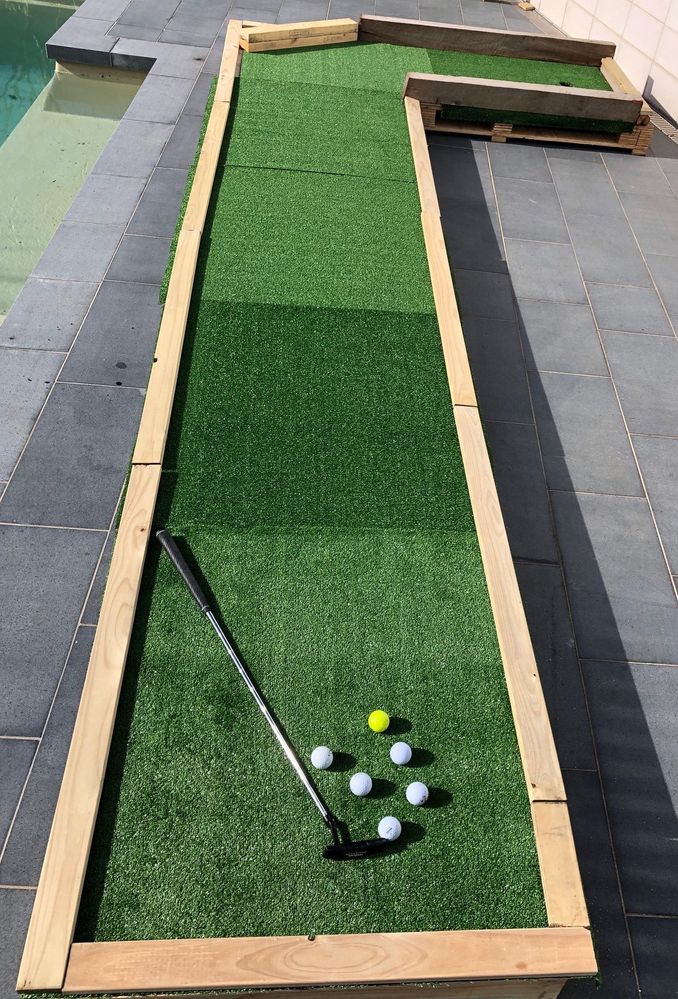 We thought a D.I.Y. mini golf hole might be a fun project for the lockdown period.

Inspiration was taken from the video below which seemed very simple. We particularly liked how it was modular so you could move it around and you didn't have to waste time building a base - just use pallets.

We've been looking out for pallets for a while and noticed that a neighbour put a few out so jumped on them and got cracking.

The Bunnings shopping list was then just plywood for the base, timber pickets which seemed to be the cheapest wood for the surroundings, some artificial turf and a few other little items like nails and a PVC hole with an endcap from the plumbing aisle. We went with artificial turf mats measuring 1m x 1m rather than buying off the roll to keep costs down and ensure we could easily pack up and store the individual pallets. We thought just some staples on the side of the pallet would be enough to temporarily keep the grass in place, and perhaps also some joining tape. 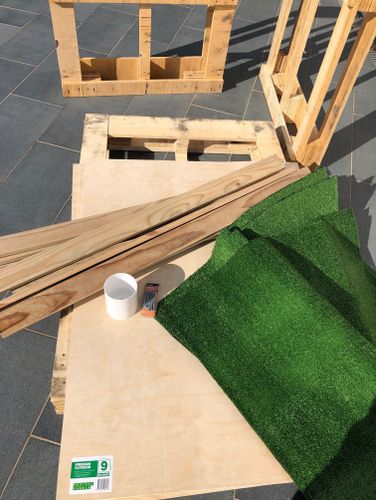 The plywood sheets were the perfect width but it was a little disappointing that they weren't quite long enough. But we certainly didn't want to muck around with cutting down the pallets, which might also weaken them. So then we figured that we could overlap the plywood anyway, so the only part that would be a little "short" would be the final pallet which had the hole and we could hide the end with some backing board.

Here's the first plywood sheet nailed onto the pallet, showing show it was a little short. 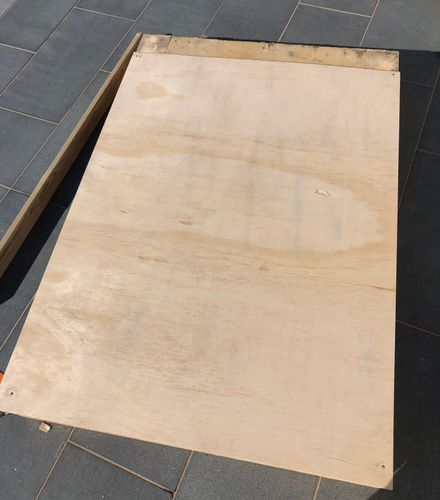 Time to trace the PVC pipe and then cut out the hole. 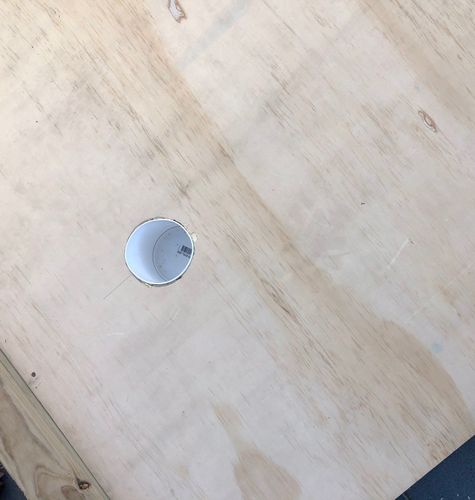 Once we put down a couple more plywood sheets it was time to do a basic test. We quickly discovered the pickets weren't well suited to the project - the ball didn't really ping off them enough. This old paver worked really well though! Our hole wasn't even half assembled and we were already having a lot of fun. 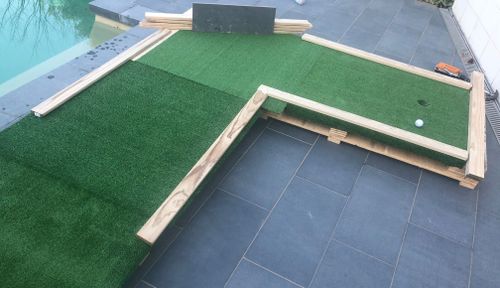 After scouring the streets again we found some old hardwood fence posts that we thought would work much better for the sides of the course, found a couple of small hardwood pieces that should work well as the "bumper" to aim at, and got really lucky with finding another matching pallet so we could extend the course.

It was then back to Bunnings to get another couple of plywood sheets and some more turf, as well as a piece of pine that we could use for the tee. We weren't certain the pallet base was strong enough to withstand people constantly standing on it, so constructing a simple box from a $5 piece of treated pine seemed to be a wise investment. Oh, we also grabbed some Gorilla glue as the old Araldite we had in the cupboard didn't seem up to the job of fixing down the hole. 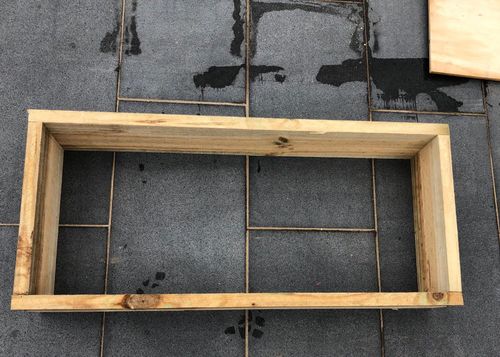 Once we'd fixed the plywood to our new base for the tee it seemed much sturdier, and it was time to do more testing. 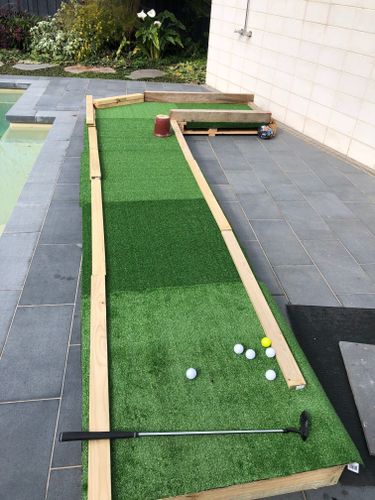 Which is where we're still at now. Still lots of testing and mucking around! It's a challenging hole. We're only getting a hole-in-1 rate of about 1 in 20, even with no obstacles yet on the course apart from an upended terracotta pot.

And we're not sure whether to make everything permament now and nail down all the sides and make it look more professional. It's actually a lot more fun being able to move things around. We've even tried making jumps just by pushing the artificial turf matting up a little. We've also had the course as just a completely straight hole - good for the purists who want to improve their putting, but not quite as fun as the L shape we think.

Hope this inspires you to build something of your own. We'd love to see it! We think we'll keep adding to ours and changing it in the coming weeks. Any suggestions most welcome! We want to start experimenting with ramps, pipes and maybe even a loop.

That's a fantastic project you've created there! I like your thinking with keeping it modular, the ability to change up the layout will always keep it fresh. I've made a similar course for activities in-store and the children and parents always had a tonne of fun especially when I added obstacles. Another great way to use the course is to exchange your putter for an 18v cordless blower as it adds a whole dimension to the challenge.

I trust your project will inspire many of our members who are looking for ways to keep their kids and themselves active during this difficult period at home. We look forward to seeing what else you add to this course and I know I'll be following along as you develop it. 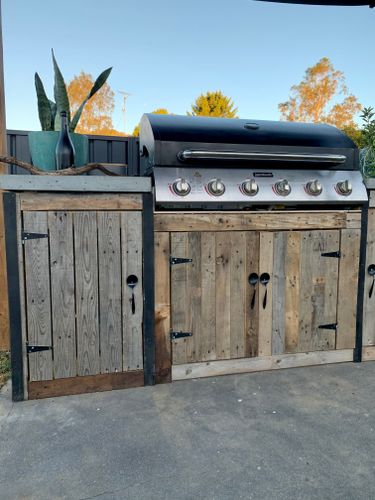 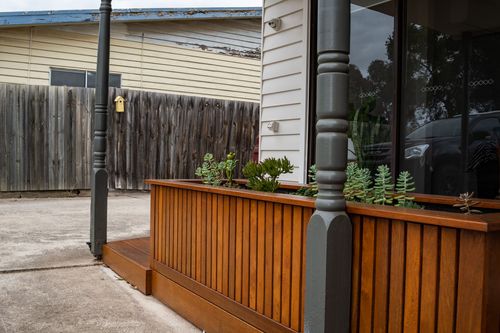 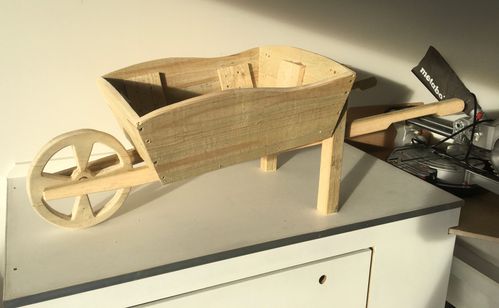