How do you keep snails out of your garden? 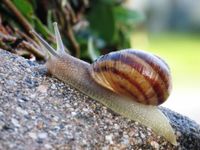 Snail bait is horrible stuff. My dog ate some that had been put down months earlier but it had a dramatic and immediate effect on him and we nearly lost him. I don't think anyone should use it, especially not in a front yard.

I know a lot of gardeners swear by the beer in a container method. But if you don't want to kill them then I'd grab them and throw them in the green waste bin. If you've got kids or friends or family with kids you can pay them 5c a snail or something!

I also wonder whether attracting birds to your garden might help? - Kermit

One trick to keep snails away from plants is to sprinkle crushed egg shells around. The egg shells have sharp edges which feel unpleasant under the snails' soft bodies, so they will avoid climbing over them to get to the plants.

Picking them up and moving isn't a stupid idea, either. Apparently moving snails just 20 feet away from your garden has shown to be just as effective as killing them. - greygardener

Sprinkling salt across the path will stop them also. - Branchy249

I use all of the methods and slugs are even worse but I still have them. Beer is best in low pot plant trays I find knocks out heaps at once plus I do the egg shells and occasionally bait. Salt is also good on specific crops like celery. I sprinkle some on around the base at night to deter them. Been collecting them for years and I have blue tongues and birds but still they come! - Cathstarr

Interestingly, the Cantareus asperses or common garden snail in Australia is an introduced species from Europe and almost identical to those found on the plates of fine dining restaurants in France. The same snails that we battle in our backyards are raised commercially in Australia and exported to France. Even Australian restaurants pay on average $0.50 a snail, and I considered raising them as a viable venture. I got so far into it that I established a breeding program for selecting traits desirable in French restaurants and that commanded a premium price tag. - MitchellMc