How do you keep sooty mould off your lemon tree? 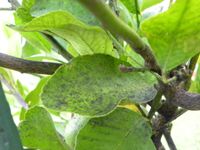 If you ever see this kind of black ash on your citrus leaves or lots of ants, make sure you tackle the problem. It's caused by scale insects which are sap suckers and will likely kill your tree. You need to use a pyrethrum-based spray to smother and suffocate the insects. - CathD

I had this on my last lot of citrus. I didn't get onto it early enough and it was a disaster. Got a whole new bunch of citrus now and am always on the lookout for it. - timjeffries

Mould is the end result of an initial problem. The insects break the membrane on a leaf giving mould a food source. Mould cannot self sustain without a spore, a food source and moisture. Wage a war on the insects quickly. - Gerald

Labels:
55 Views
0 Likes
Like
Version History
Last update:
a month ago
Updated by: