How do you remove Soursob from the lawn or garden? 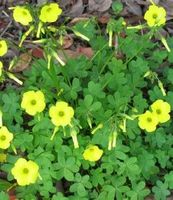 It's very difficult to kill soursob because of its bulbs. Digging them out is the most effective method but obviously very difficult and time consuming. You have to lift out the entire plant and bulbs and be very gentle so that you don't leave anything behind which will just sprout again.

I have also read another suggestion for lawn areas - not let them grow to flowering stage and then mow them off, trying to get as little of the lawn as possible, repeating it once a week. This attacks the weed at its weakest stage. Hopefully then as your lawn roots establish, they will suffocate the soursobs, resulting in them dying. - greygardener

Make sure you get the bulbs - they are usually 4-6cm below the surface. The worst thing you can do is to cultivate the area as this spreads the bulbs around. If you do spray with weed killer the timing is important - just before they are about to flower. You could try boiling water but you will damage other nearby plants and kill the poor little worms. I've also seen people suggesting putting down a thick layer of newspaper followed by garden mulch but I think this would only work after pulling most of them out by hand. - Isobel

I read recently that an effective method is weeding them just before they flower, which gets them at their most vulnerable and upsets their life cycle.

We were inundated with soursobs in our yard so I diligently eased them out (rather than snapping them at ground level) over a few years and they rarely come up at all now. I hand weeded our lawns too, so they aren't a problem either, but apparently mowing them only impedes their growth and doesn't eradicate them.

This came to my inbox, courtesy of a Jon Lamb newsletter, and may be helpful: http://www.paulmunnsinstantlawn.com.au/blog/soursobs/ - Andy_Mann

Further to the great advice so far, you could get your hands on a broad leaf weed killer such as Bin-Die or Yates bindii and clover killer if your not dead set against spraying them. The broad leaf killer won't harm the lawn because it's a targeted weed killer unlike glyphosate. - Dave80

Persistence is the key word. Each week, for 5 years, I have been digging out the soursob in a small area in the garden. This area is now free of soursobs! Pure will power! - QuailFlock

I find this weeder better https://www.bunnings.com.au/fiskars-xact-4-prong-weed-puller_p2970049

Certainly saves the back and is very effective. Works on the winter-grass, dandelions, bindi, flatweed, etc, as well. Note there are 2 models at the same price. The newer one has the golf club shaped handle and carbon fibre composite foot piece (rather than plastic which more easily breaks). - aussiblue