Should I install a butler's pantry? 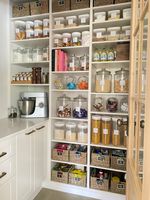 Workshop member Acewoodhome's butler's pantryWhile everyone loves open plan kitchens, in recent years butler's pantries have been growing in popularity. Butler’s pantries are not only a place to store food, they also serve as an additional workspace, with extra bench space to prepare food, store appliances. Many even have dishwashers, fridges and sinks.

Some people love the fact that their butler's pantry can help keep their kitchen pristine and clutter-free, especially when entertaining guests. But others hate the idea of working in a cupboard.

The Workshop community is split as to whether they are a good idea. Just over half of community members thought that separate butler's pantries are a good idea for creating extra space and hiding mess and clutter, while 44 per cent said it wasn't for them. - Jason

It seems silly to me to have two kitchens - it would add significant expense that could be better used elsewhere. And I wouldn't want to be locked away from everyone else. What makes open plan kitchens so lovely is that you can be cooking but still interacting with friends and family. - Isobel

I've always looked at butler's pantries on renovation shows and wondered just how much people actually use them. To me they just don't seem worth it. I'd rather have an open kitchen and a huge pantry. - aly

We're thinking of renovating our kitchen and working on adding a butler's pantry. It's something that I've always (since I found out such a thing existed) wanted. I think it's a brilliant way to add extra bench space, and store appliances and perfect for hiding away clutter when entertaining.

The challenge for us has been to find enough space for it. So we've decided to have a combined laundry + butler's pantry! As far as I'm concerned it's going to be a butler's pantry with the washing machine and the dryer tucked under the workbench. - Suja

The working kitchen can be cleaned the next day, rather than chewing into the already busy schedule of the day.

Including a washing machine in the Butler's Pantry is a brilliant idea. Water supply and drainage are already available, so are the electrics, so it's just a matter of tapping into them, rather than having to pay professionals for expensive service runs. - Andy_Mann

In my recent build, I have a walk-in pantry (what was called a 'Butler’s Pantry') however it is just shelves on either side of the room. I love to cook, so I wanted a pantry that had plenty of space to keep all my Tupperware and perhaps include a small bar fridge for alcoholic beverages instead of in the main fridge. It never appealed to me to have a sink in there for washing dishes and I probably would never prepare food in there. However, I would prefer a bench with a cupboard above and below instead of what was built-in. We might change it around in future to do this, but for now I'm happy with the shelves. - TheFoxSays

I think this is a great idea in homes that can afford the space even though this space was normally only about 2 metres wide and as long as necessary, sometimes the length of the wall of the dining room on the other side.

These days in a modern day home I see it very practical. I do think that the cooking area needs a window / servery to pass the food through. I do believe that a separate area, even hidden behind a partition at least, can separate the dining facilities from the cooking facilities and serve as the invisible messy area. - WallsendWoman

We love the idea as it suits our needs. Our original house plans had a very, very  large walk-in pantry that came off the kitchen and had shelving on 4 walls. We have 6 kids ranging from primary school age to young adult, so we did the following at build stage:

We then put the dishwasher under that bench and drawers for kids lunch boxes, their own individually coloured plates, bowls, cups, etc. Kettle, toaster and sandwich press and condiments shelf at one end of the bench.

The reason for all this is that the room was huge to fit it all easily and that's where we all go to make toast, cereal, tea, Milo, snacks, etc and the kids can be messy, so it's out of sight til someone cleans it up.

Also being a big family, we use large baking trays and pots often, so it's great dropping them into a deep, wide sink and giving them a good scrub. There's still two full walls of shelving, so it does look a bit like a supermarket on that side as we like to stay stocked up in case of emergency.

Not for everyone, but we absolutely love it and it's very functional for this tribe. - rattle

We have a butler’s pantry, with a sink and our dishwasher. If I could turn back time, I would have definitely not put our dishwasher in there! Now I am just double handling a lot of the time because we also have a sink in the kitchen. So that’s where our dishes are sometimes put after rinsing, and then I come along and move it to the butler’s pantry where the dishwasher is. Regarding butler’s pantries in general, they’re OK to have but I don’t see the greatness in having one. - jose29