Bathroom overhaul from 1950s to modern

A cosmetic bathroom update that didn’t hold up over time prompted a complete overhaul including a freestanding bath, floor-to-ceiling window, under-tile heating and stylish tiling.

Two windows will become one and will stretch all the way to the floor, looking out onto a small private garden. A freestanding bath will sit in front of the window, while the shower will stay in its current location. The toilet will move to the opposite wall and the vanity will be mounted on the left wall. We'll be installing under-tile heating, while the lighting will be a combination of downlights, pendants and LED strip lighting under the vanity. 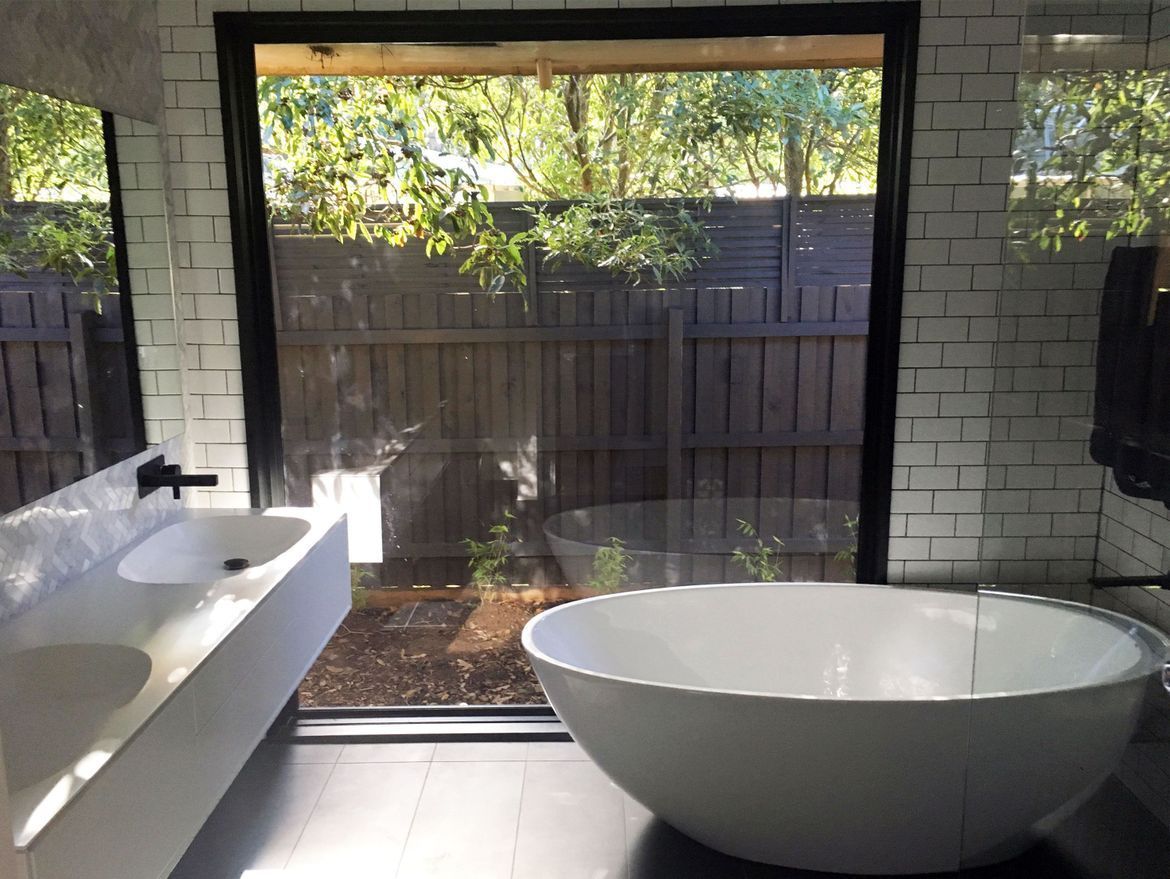 When we first moved in, the bathroom was the worst room in a house that reeked of crimes against interiors. Pink walls, a pink bath, grey and pink tiles and a laminate vanity that even the 1970s would have rejected. 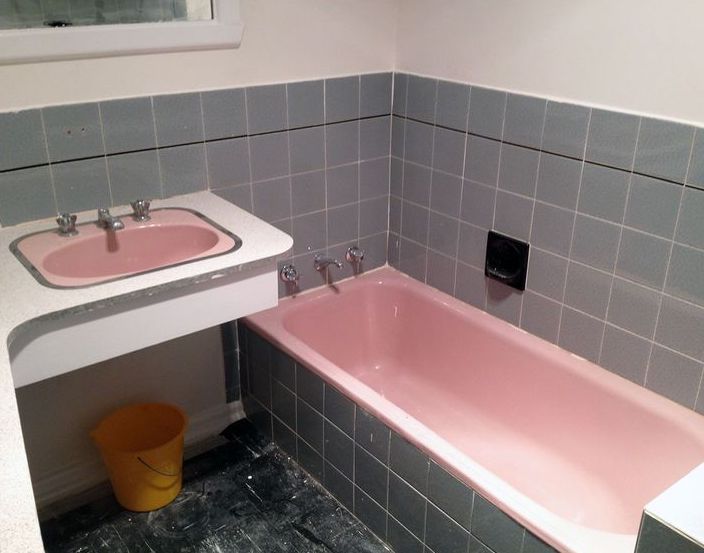 Inspired by watching every season of Selling Houses Australia we did a cosmetic reno – changed the tapware, updated the lighting, sprayed the tiles, painted the walls and replaced the stick-on vinyl floor tiles with basic porcelain ones.

And for a while that was fine. But then things started to change. The spray-on surface started to lift and our two small children delighted in peeling it off during bath time. Fun! Even our dogs, Sid and Bella, got in on the act by scratching some of the paint off the tiles.

That was almost four years ago. It’s taken a lot of weekends, holidays and evenings but finally the inside is taking shape, and the tide has turned in the battle against the ugly. And emerging from the wreckage is a space that our family feels connected to and is proud to call home. Now as our renovation journey nears its end there’s just one room left, the bathroom – the worst room in our home.

So we made the call – the bathroom has to go. We’ve decided on a full reno, a total gut job. This is the diary of our bathroom renovation.

Day 1: Out with the asbestos

One of the pitfalls with a house built pre-1990 is getting to play a bit of 'find the asbestos'. We removed a ton of the stuff from beneath the flooring in our back room, an extension that was added to the house in the 1980s. Back then, asbestos was as popular as hair metal bands and just as offensive. Luckily for us there wasn't a lot but we still needed to call in the professionals to get it out safely and dispose of it correctly. Once that was done, our builder got stuck into the demolition.

While our main bathroom is being demolished and rebuilt, we're using our second tiny bathroom, which I recently updated and posted about here. 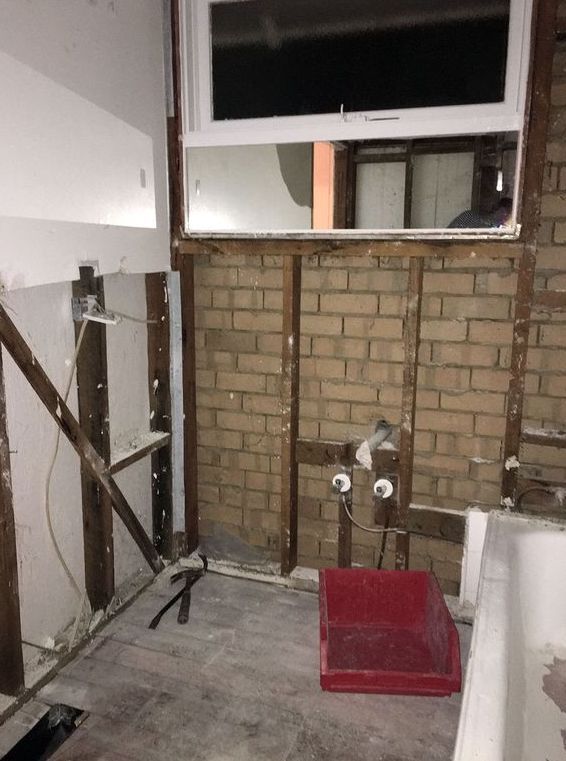 With the demo pretty much done and dusted for now, the plumber arrived first thing to start moving pipes and installing new ones. Our builder and plumber spent a fair bit of time together going over the layout to ensure that everything is put in the correct place.

The plan went a little off track. First up, it was a call from the electrician: 'You're going to need to do your mains soon.' This wasn't something we'd budgeted for as part of this renovation but was something our electrician had previously told us would need to happen at some point. With that in mind we figured we'd get it done.

Not long after our plumber informed us that 'I need to move the hottie'. It turns out that, because we're increasing the size of the bathroom window, it means the hot water service will now be too close to our new window. So it has to move. Again, another unforeseen issue that we hadn't budgeted for but will need to accommodate.

While we hadn't budgeted for these specific issues, we did keep a 10 per cent buffer in our budget for any unforeseen issues. It's day four, and our budget buffer is gone. Let's hope there aren't any more hidden problems.

The bathroom has been sheeted with waterproof plaster, the plasterer has done his thing, the shower has been screeded and the niches have been framed up in the shower. The gaping holes in the floor have been sealed up and the room really is taking shape now.

Two windows have become one and the waterproofing process is complete. The room is starting to take on some character and the window is letting in plenty of light. It’s tinted, so you can’t really see in but looking out you can barely tell that it’s tinted. 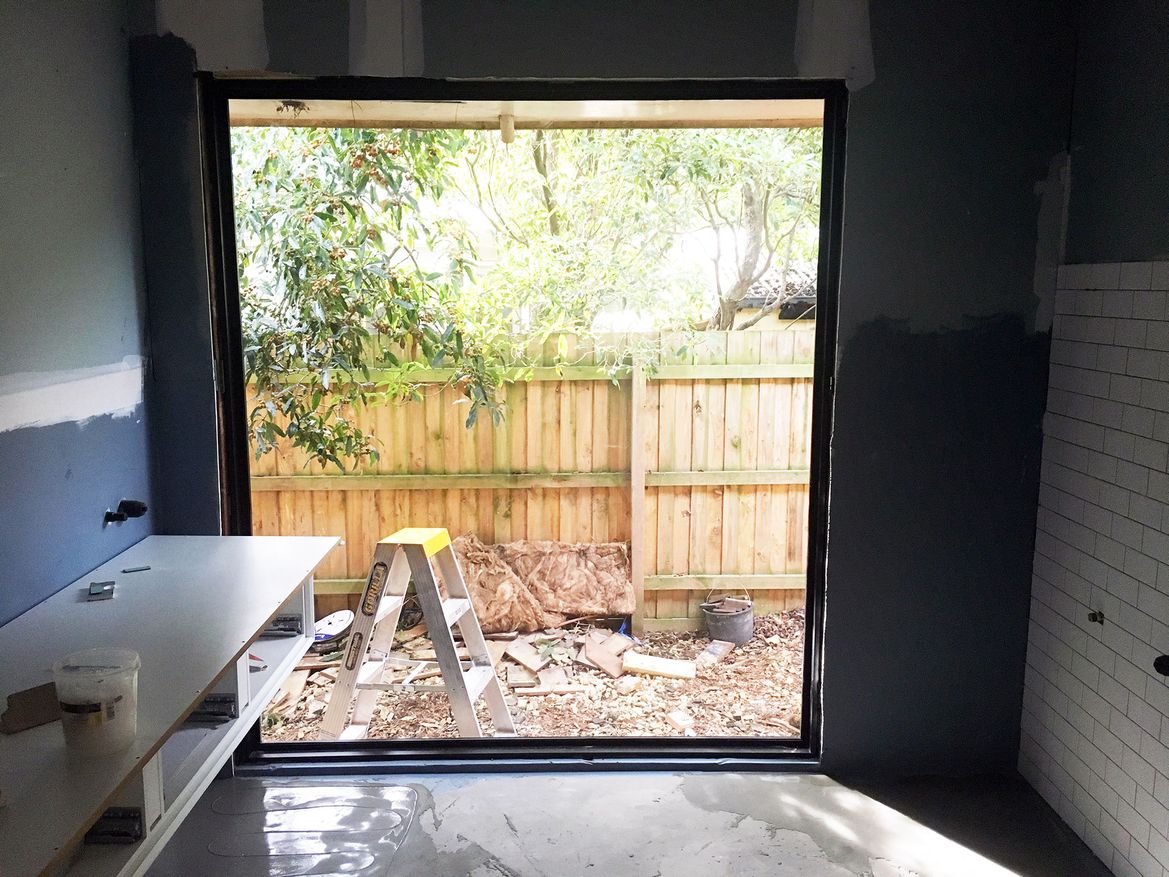 Our Issy Glide vanity is up, and wall tiling has begun. We’ve chosen Carrara Marble Herringbone tiles for one wall, surrounding the vanity and mirror, and white Subway tiles will be used on all other walls, floor to ceiling. Today the charcoal floor tiles should go down and tomorrow the bath. 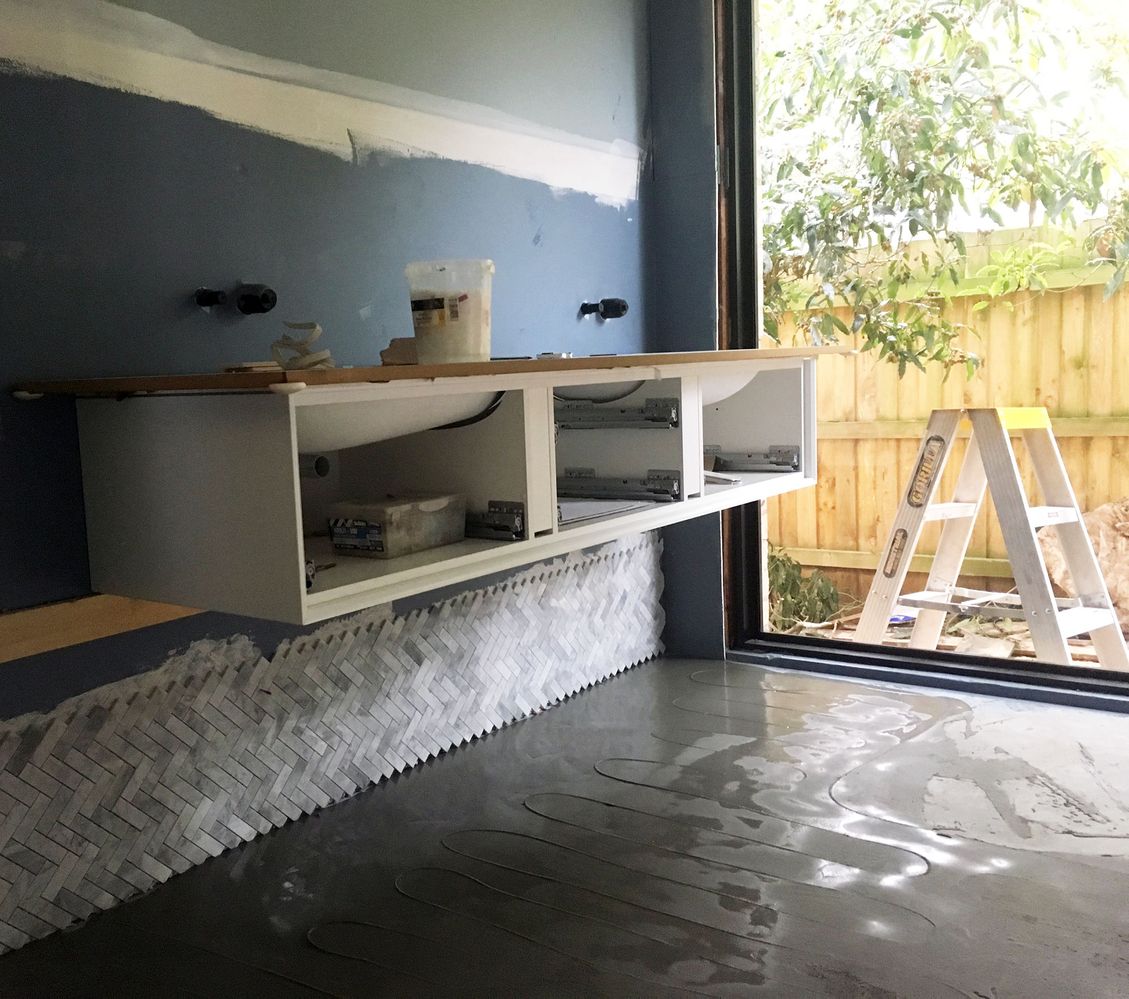 Turns out those small Subway tiles take quite a while to do. The floor tiles are done and the walls should be finished today. This week I’ve made two trips to source extra tiles. Despite adding on an extra 10 per cent to allow for wastage, we have still run short on both our Subways and the Carrara Marble tiles.

We were initially planning to tile part of the way up the wall, but once the build started we changed our mind and decided to tile all the way to the ceiling. That was our first mistake. As for the Carrara Marble tiles, I think I must have messed up my calculations. I guess the lesson here is if maths isn’t your strong point, get someone else to check your figures.

Once the tiling is done, the next thing to install is our Rick Maclean’s freestanding bath from Bunnings, followed by the taps and lighting.

Another milestone – the bath is in! Tiling is almost done, and grouting is half complete. Also, the shower screen is in and the mirror is up. With the bath installed, the room is starting to feel more complete and we’re getting a better sense of the space. To complete this project, the electrician will return to install the exhaust fan, five downlights and an LED strip under the vanity, and the plumber will be in to install the tapware. 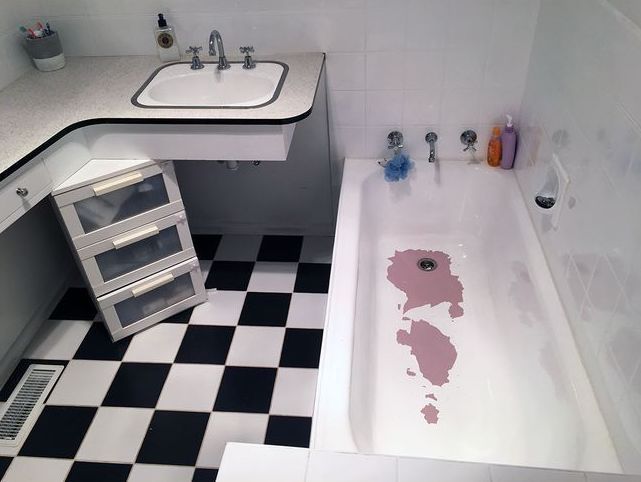 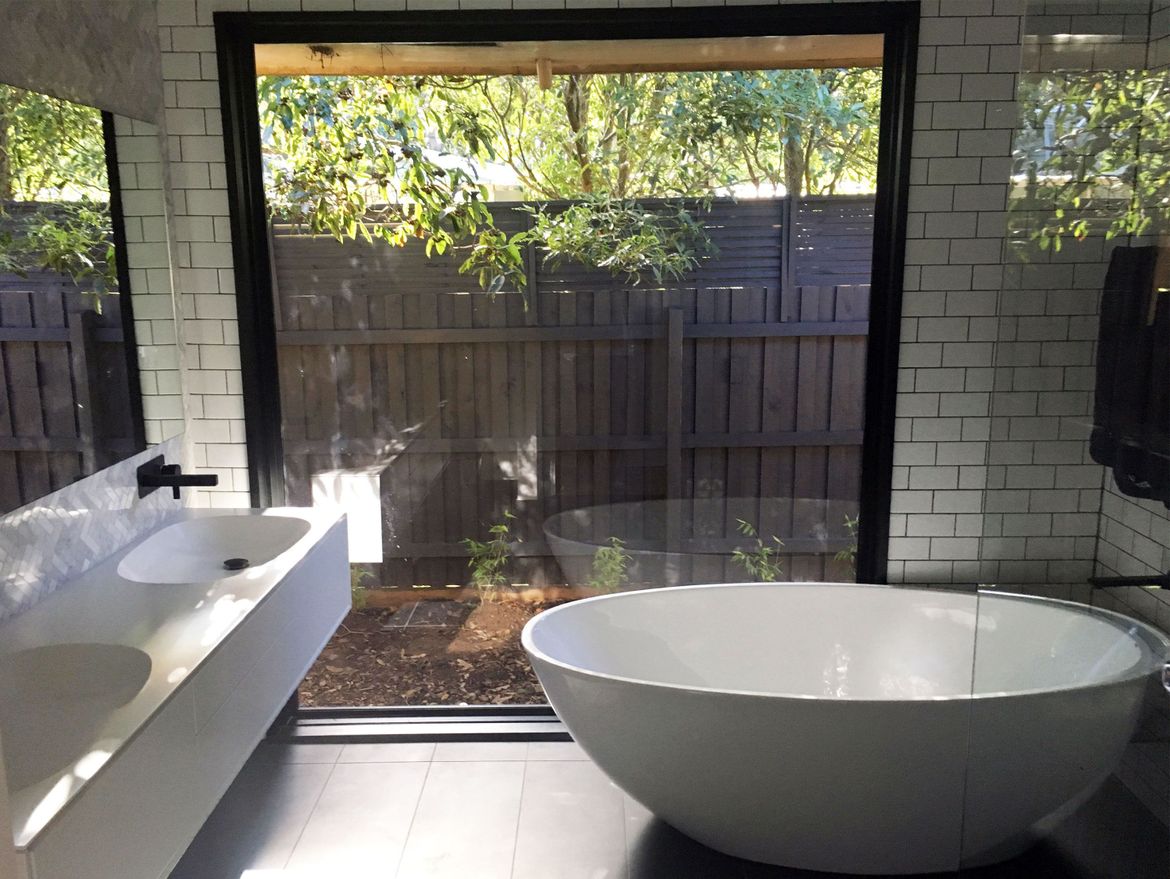 Tips for your renovation project

We had spreadsheets, we'd looked online, in-store and all over social media but despite all our research, we still weren't fully prepared. Deliveries run late, and hidden problems are uncovered. Purchase as many items as you can as far out as possible to avoid installation delays if a delivery deadline is missed.

Your budget is probably wrong

Ours certainly was. We budgeted $30,000, but the the total came to $35,000. Why did we blow out? The main reason is that we didn't stick to the budget on one particular item – we ended up spending a lot more on the vanity than we had budgeted. The other area where costs blew out was tiles – I miscalculated the amount of tiles we'd need, then we decided mid-project to tile all the way to the ceiling. It all adds up. Set aside 10 per cent of your budget for unexpected surprises to cover yourself.

Get advice on your selections

Originally we selected a swivel tap to match the bathroom vanity taps. We wanted a swivel tap so when the bath was filled the tap could be safely tucked against the wall. Our daughters treat the bath like their own private water theme park, so keeping the tap out of the way was high on our list of safety measures.

Unfortunately, this particular tap took its sweet time arriving. It finally showed up to the party long after all the other tapware had been installed. However, our plumber recommended against using this particular tap as there was the possibility that it could come loose from the wall. Thankfully, he was able to source a similar-looking matte black tap that fit, but unfortunately it doesn't swivel. The takeaway is that if we ever do a major bathroom renovation again, we'll run the tap selection by our plumber before purchasing.

If you're doing this for the first time then maybe run your figures by a friend or someone you know who has renovation experience. They may pick up on something you've missed, which could save you a potentially costly delay in the future.

Renovations take time. Our bathroom took four weeks in the end – the Olympics are run and done in half that time. Before you kick off a big project, make sure you meet your tradies first. Get multiple quotes and make sure you feel comfortable with who you give the job to. We chose our builder because, during the quote process, he was happy to discuss options and welcomed our input in the final layout of the room. He also had a good portfolio of work on his Facebook page. As for our other trades, we were lucky that our electrician is a relative and the plumber is his best mate and we've worked together previously on other projects. There's a lot to be said for having trust in your trades – ask around and get recommendations from people you trust. It can mean the difference between a great outcome and one that you're less than satisfied with. 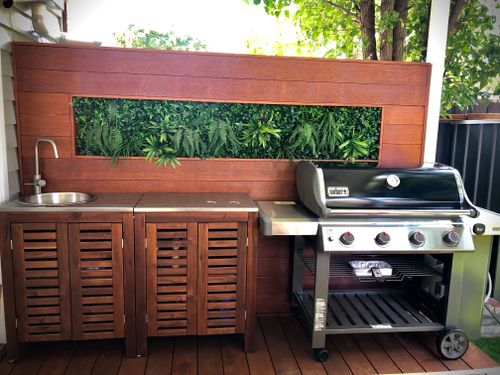 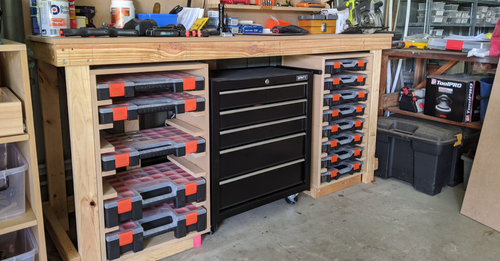 Outdoor kitchen with deck and pergola