How to grow venus fly traps and other carnivore plants

How to grow venus fly traps and other carnivore plants

As most have probably seen, Bunnings sell venus fly traps (dionae muscipula) and a plant they call "gobble guts" (saracenia, a pitcher plant)

Most people see them as a novelty and they soon die. It seems (unfortunately) even bunnings dont understand their needs as they keep them indoors when they actually need full sun.

I've attached a few photo's. One is your standard plant seen at bunnings, the other is my plant after being repotted and given a full growing season. They will go dormant in winter, traps will become unresponsive and die back to almost nothing. At this point the rhizome is growing bigger and stronger, ready to burst into life in spring.

If your plant is doing well the rhizome will actually divide into more plants on its own. You can tell this happened when your plants have more than one crown - traps will always grow from the centre of a plant, when you see them growing from various points theres a high chance another plant has divided off from the 'mother plant'.

these plants are actually very easy to keep if you follow a few basic rules.
keep moist with rainwater, never allow the soil to dry out.
NEVER fertilize, never use tap water.
full sun, except in heat waves.
never, ever, feed it after midnight

(im just kidding on the last one, gremlins fans)

Growing Media: CP's cannot tolerate any minerals or nutrients at all. Best growing media is a 50/50 mix of peat moss and perlite. I suggest "brunnings" brand peat moss as some brands (such as killarney peat moss) have additives which will kill your fly trap before it has a chance to grow.

Put some peat in a bucket, add rain water, and mix until it absorbs the water. Then add perlite for a roughly 50/50 mix so the end result is a very free draining media that holds moisture.

You should keep it moist at all times. never allow it to dry out in summer, and dont allow it to become boggy in winter. My preference is the self watering pots. Small pots will dry out a lot quicker than larger pots. Large pots will also allow the plants to grow for many seasons without needing to be repotted.

Water: CP's require pure water with no minerals. That means you can only use rain water or distilled water. Tap water, spring water, filtered water, will all kill your plants eventually as over a year or two the minerals build up in the media.

Sun: CP's require full sun. During heatwaves its best to move your plants so they get morning sun but are shaded from the hot afternoon sun.

If your plants are given the above conditions they will catch their own bugs and the traps will be very responsive. they do not needs bugs, but if doing well they will use it as a self- fertiliser boost.

Do not trigger the traps!! each trap will only work a couple of times before it dies off. traps are constantly dying off while new traps are growing. If you trigger the traps you kill them and the plant cant do natural photosynthesis as the baby traps are too small to support the plants needs.

Each trap has 3x trigger hairs on each side. think of them like an eyelash. stiff and very sensitive to touch. if any trigger hair is stimulated multiple times within 30secs the trap reacts. at this point the trap needs a bug constantly struggling and triggering those hairs to signal to the plant to keep tightening up. eventually it secretes enzymes that turn the bug into "bug soup". the trap then absorbs this bug soup and when it reopens just a crispy bug skeleton remains.

If you trigger the trap yourself, or a leaf or stick triggers the hairs the trap closes but doesnt get constantly triggered so it reopens the next day, its the plants way of knowing there wasnt a live catch. they can only trigger a few times then they die off.

"gobble guts'  (saracenia pitcher plants) are passive CP's. the bugs are attracted to the pitcher, while exploring the rim of the pitcher plant they fall in and cant get out. In summer you can hear a large saracenia buzzing with trapped, angry flies that cant escape (fly's cant fly straight upwards)

We all know that a fly trap reacts and closes on a bug. But did you know they also move/react in other ways?

When you re-pot a fly trap the traps will actually curl backwards and try protect the exposed rhizome. Think of how your holding a banana and as you peel it the skin droops down around your hand. Thats what a VFT does to protect itself. Sometimes you put the plant in the fresh grow media and the curling leaves actually jack the whole plant up and out the ground.

Stores like "triffid park" sell all sort of CP's and other VFT cultivars .. ones with saw tooth shaped edges, or akai ryu (red dragon) VFT which is all red, B52 known for its very large traps.

Most CP's are grown in tissue culture. the fancy VFT cultivars such as saw tooth and akai ryu are all grown from pieces of the same plant making them genetically identical. This is because growing from seed is very slow and difficult and you dont always get an identical plant.
A fly trap seed will take several years to get to a bunnings store sized plant.

If you're thinking of growing something from seed or want a plant for your kids, then Drosera Capensis is worth looking into. The common sundew is quite an attractive little plant, very fast and easy to grow. You can get seed and grow more plants easily, and when bugs land on the sticky dew covered leaves they struggle and the leaves will actually curl up and roll around the bug, making the bug become even more trapped on the sticky leaves. 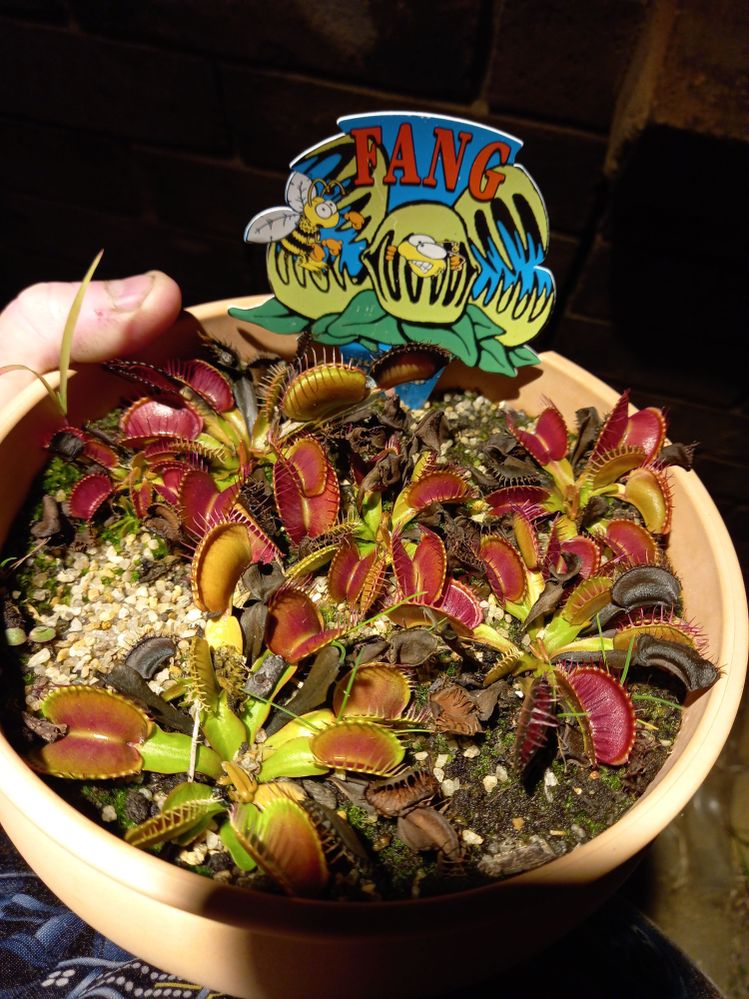 bunnings VFT, one season after being repotted. 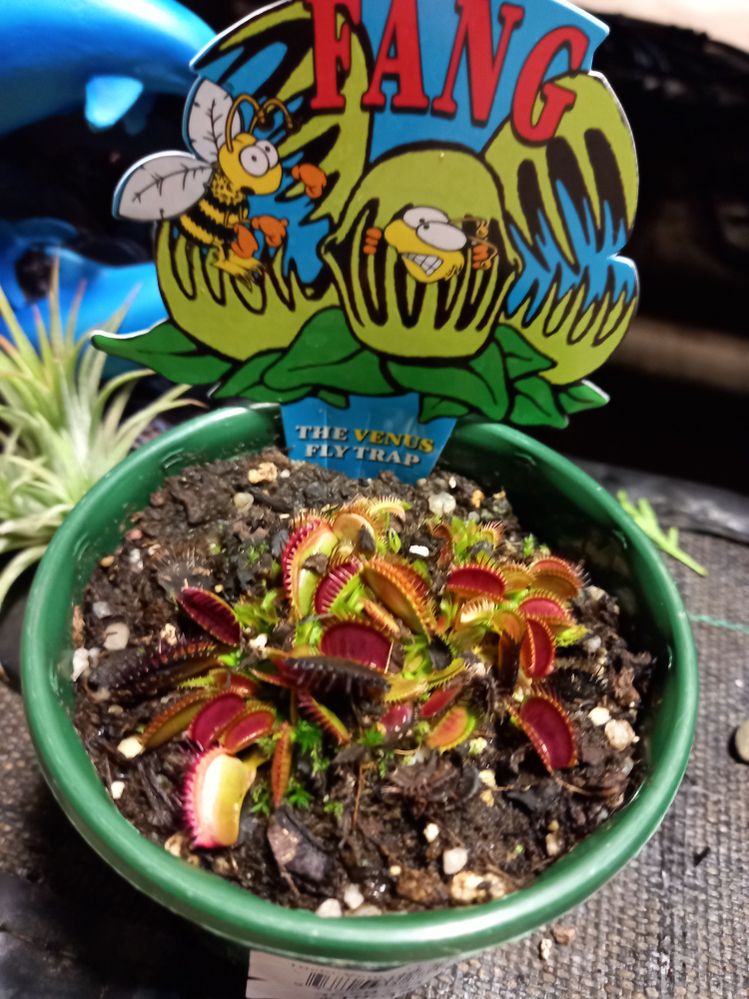 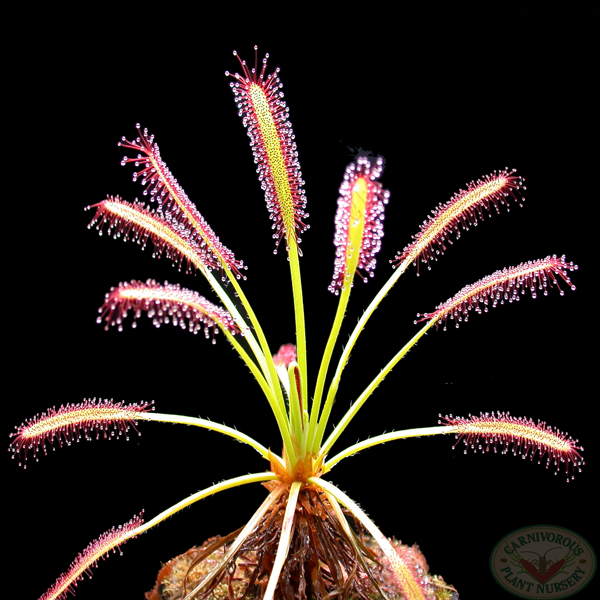 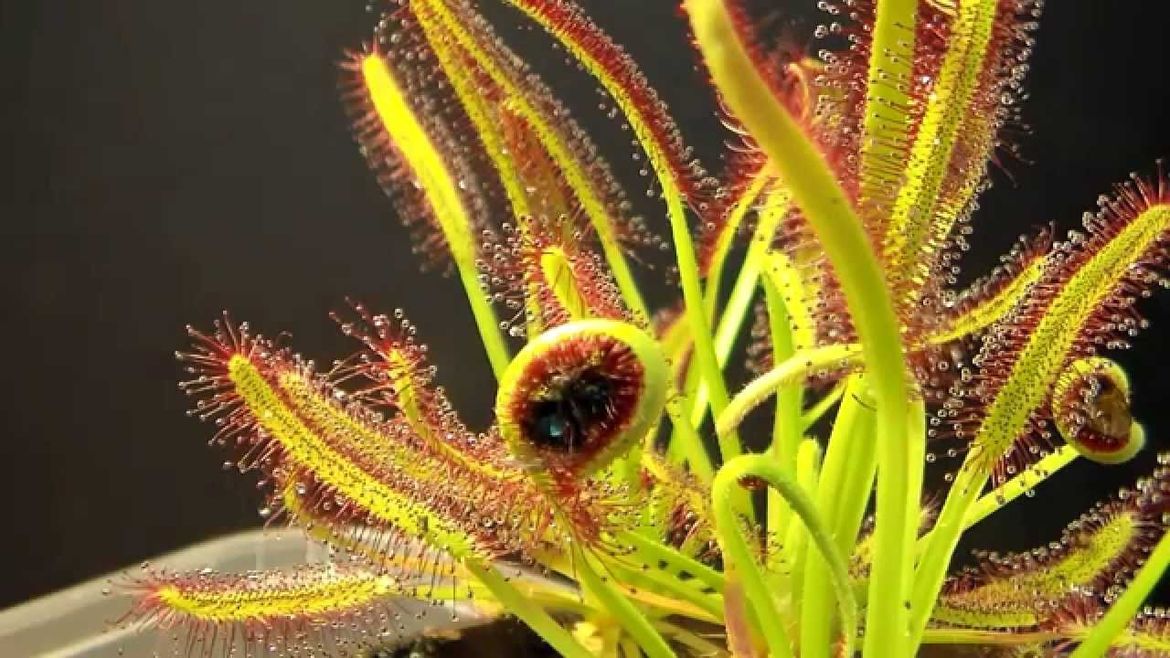 Gotcha! A Capensis curls its leaf around a fly.

Re: how to grow venus fly traps and other carnivore plants (CP's) 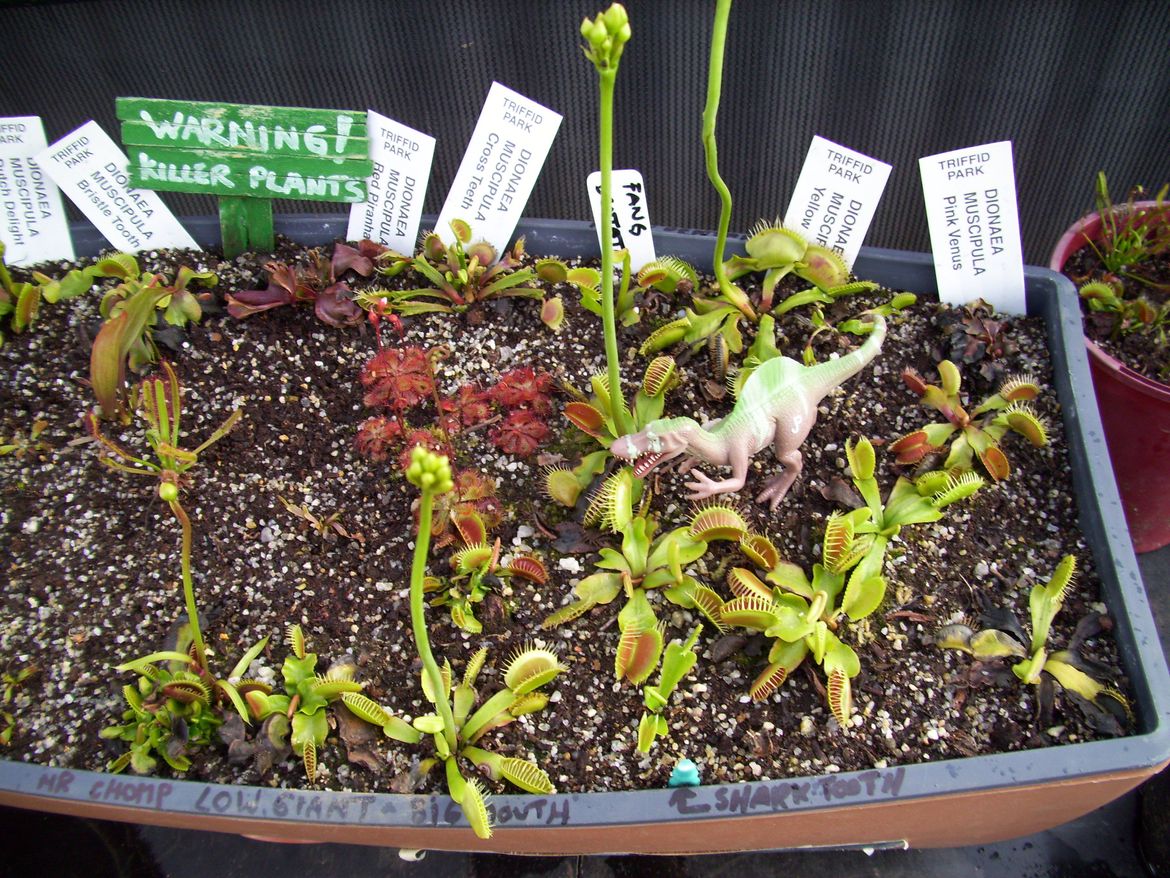 Self watering trough. Great for keeping several different CP's as you only have to water one trough and it doesnt dry out quickly like regular pots do.

Akai Ryu - the red dragon fly trap.  The traps seen in this trough, and especially the red dragon trap were all freshly planted so not looking the greatest but you get the idea. Unfortunately i lost the plants in this trough many years ago during a heatwave of over 40c weather for 3 straight weeks. in keeping myself out of the heat i didnt check on the trough often enough and it dried out too many times, eventually killing the plants.

Darlingtonia californica - the cobra plant (people call it a cobra lily, but its not a lily)

this is one of my favourite CP's, but its a bit harder to grow. It looks like a pot of cobra snakes. bugs enter under the plants head (where a mouth would be) and seeing light through the head get confused, eventually falling down the neck of the plant never to escape. 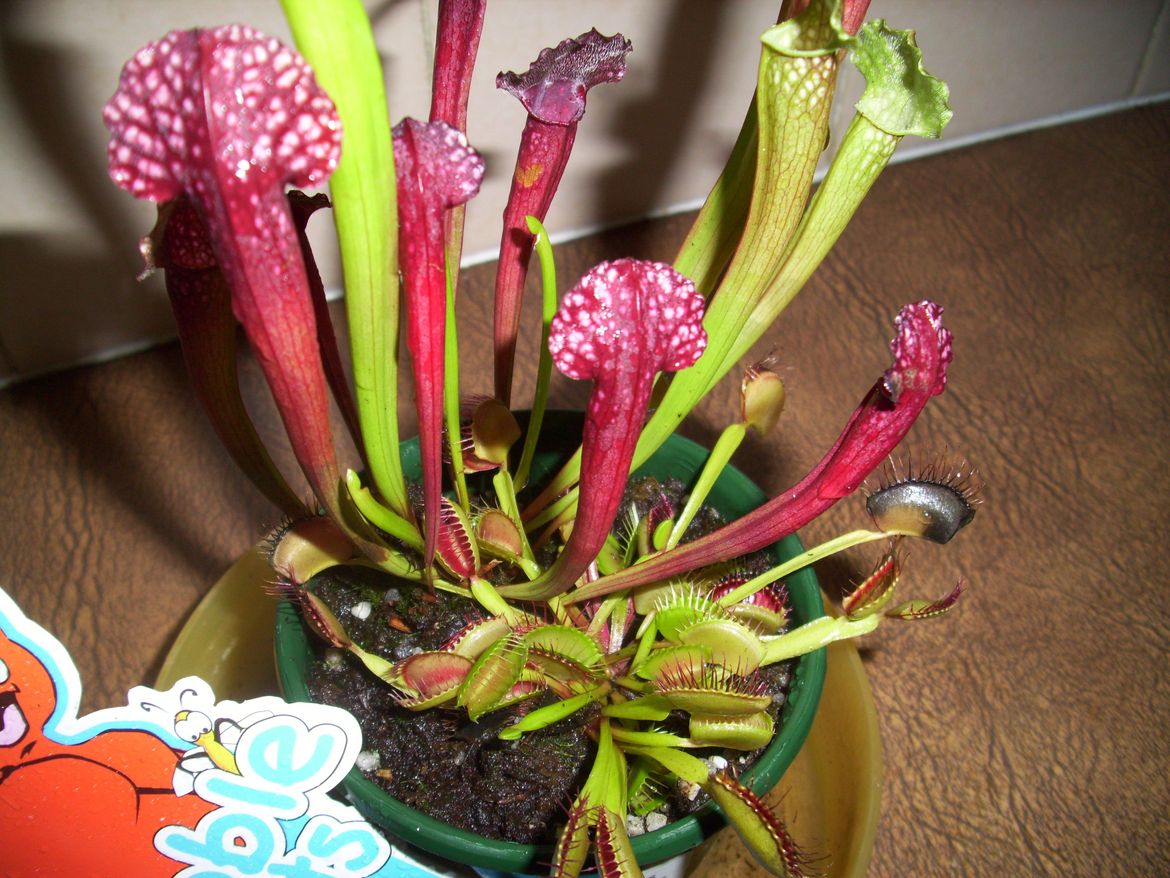 my favourite type of self watering pot. Several different CP's all easily watered in one trough.

my favourite CP. "Darlingtonia Californica" - the cobra plant (its not actually a lily despite being called cobra lily)

Re: How to grow venus fly traps and other carnivore plants

Thank you for taking the time to share your knowledge with us @Bliv. I'll be the first one to admit to killing my fair share of venus fly traps. After reading your post, I'll have a better chance of success in the future.

What got you into collecting plants with carnivorous feeding habits in the first place?

Many thanks for sharing once again.

Re: How to grow venus fly traps and other carnivore plants

Hi Mitchell, i bought one from bunnings and decided to do a bit of research into them, joined an online forum, then found out there was a CP group near me that met once a month.

It was one of the best club's ive ever joined actually. 25 bucks a year. just a group of people meeting to talk about their plants, tips, what worked/didnt work. show their latest plants or projects, and even share excess plants and seed with other members.

It was very co-operative with people just helping one another and gifting plants, seed, excess grow media etc.

I found it fascinating that VFT (venus fly traps) can detect movement and react, and that even plants like the Drosera Capensis (cape sundew) can curl and wrap their sticky leaves around a bug.

Its proof that plants can actually feel touch, even if its not how we would think of it.