How to control citrus gall wasp

Citrus gall wasp (Bruchophagus fellis) is an unsightly pest that over time will weaken trees and impact fruit production. The small brownish black flying insect is native to northern New South Wales and Queensland, but is now widespread in most areas around Australia where citrus trees are grown. 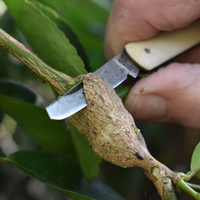 If you have trees such as lemon, lime, orange, grapefruit, cumquat or mandarin, you should treat this pest seriously.

As citrus gall is now well entrenched in Australian home gardens and commercial citrus orchards, complete eradication is unlikely. However, it can be managed in urban areas by good cultural and hygiene practices. If it is affecting your citrus trees, take action and remove as much of it as possible from your garden.

This pest’s lifespan is about one year from the time the egg is laid to the emergence of the mature adult. The female must then mate and lay its eggs within about a week before it dies.

Eggs are deposited under the bark on the soft, new shoots of most types of citrus trees, including native finger limes. The unsightly, woody galls typically associated with an infestation form around the larvae when they hatch from the eggs in similar fashion to scar tissue around a wound. The larvae pupate within the galls and the adults emerge through small holes in spring to spread and go on to infect more shoots. 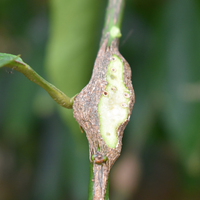 Citrus gall wasp is most often spread through the introduction of infected plants into orchards and backyards, as well as failure to treat infected trees and inappropriate disposal of infected branches. In suburbia, if your neighbours’ trees are infected then it’s almost inevitable your own trees will also suffer the same fate.

Galls place stress on trees by damaging internal structures and creating weaker branches. It is also believed they may affect productivity when present in high numbers. Valuable resources are directed away from flowers and fruits to producing galls instead.

When and how to treat galls

Galls usually start to appear from late autumn into winter. But pruning in winter to remove an abundance of galls may encourage a strong flush of new growth in early to mid-spring, just as adult wasps are emerging on neglected or unmonitored trees and looking for soft shoots in which to lay their eggs. 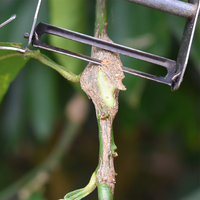 Using a sharp knife or even the humble potato peeler, slice through as many galls as you can reach or find, to expose and kill the developing larvae. Be careful not to ringbark the branch by slicing all the way around the gall.

If only a small number of galls are present, they may be cut off, but do not prune back severely because you do not want to encourage prolific new growth early in spring. Cut neatly with sharp secateurs to minimise bark damage.

Dispose of gall prunings by wrapping in plastic bags and placing them in the household rubbish bin – do not put them in the green waste bin.

Hang yellow traps in citrus trees to catch wasps as they begin to emerge from galls. Large trees may need more than one trap to ensure adequate protection.

Keep an eye out for emerging larvae and spray with an insecticide to prevent them reinfecting the tree. 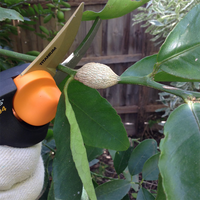 Delay feeding citrus until the end of the growing season to minimise the production of lush new growth when gall wasp adults are active in late spring and summer. Your trees will still grow, flower and fruit well but they won’t be as susceptible to gall wasp attack if growth is better managed. Remember to always use a plant food recommended specifically for citrus.

Pruning and gall removal should also be held over until late summer or early autumn, when wasps are not present to attack any flushes of growth.