How to keep your garden safe for pets

Many Aussie and Kiwi families have two great loves – their pets and their gardens. They would be devastated if they knew that some of the pretty shrubs, flowers and productive vegies they’re growing could be fatal to their beloved animals.

Checking for problem plants is extremely important for the safety and longevity of your pets.

These common garden plants are known to contain toxins that can affect dogs and cats. The following list is by no means exhaustive, which means that before buying new plants for your garden, you should do your homework to find out if they are likely to cause problems for your cat or dog.

Ask your local vet if there’s a brochure available with detailed lists of potentially harmful plants. There is an abundance of information available online, including Toxic plants for dogs (Victorian Department of Agriculture) and Toxic plants for pets (RSPCA NSW).

If you suspect your pet has eaten something they shouldn’t have, take your pet to a vet immediately along with samples of the plants.

Daffodil bulbs look similar to onions and might be mistaken for them. The leaves are poisonous to both humans and animals and may cause diarrhoea and vomiting. The leaves and bulb scales may also cause skin irritation and dermatitis. 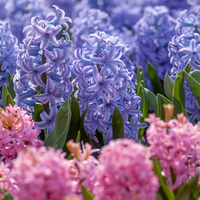 Hyacinth bulbs and the leaves can be toxic to dogs and cats when eaten, causing vomiting and drooling. Like other bulbs, store them out of harm’s way.

Tulip bulbs may be toxic to dogs and cats if they are eaten. Take care to store them well out of reach of animals (and children) after they are lifted at the end of their season.

Lilies (most types including Asiatic, Tiger)

Lilies of the Lilium and Hemerocallis types are extremely toxic to cats, with all parts of the plant hazardous and only a small amount required to cause severe symptoms. If left untreated, cats may suffer acute kidney failure within hours of ingestion.

The roots and rhizomes of irises are extremely toxic to dogs and cats when eaten. Even the flowers may cause symptoms so choose planting sites carefully out of the reach of your pets. 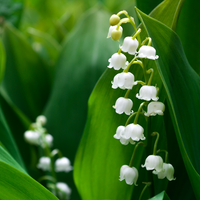 All parts of the Lily of the Valley plant may cause cardiac symptoms if eaten, including the pips (underground rhizomes) and flowers. The red berries that follow the attractive flowers are extremely harmful if more than a small number (5–10) are consumed.

Poppies (Iceland and other types)

The drug-inducing properties of the opium poppy are well known but what might not be as widely understood is that most poppies can have similar effects. It is the sap of the seed heads that contains the active ingredient so to protect pets and children, cut off spent flowers after the petals fall.

Danger lurks behind the extraordinary beauty of paeonies. These blooms can be toxic to cats and dogs, causing vomiting and diarrhoea if eaten. 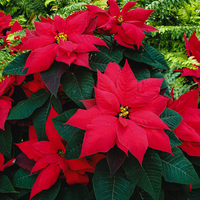 All members of the spurge family including poinsettias, the spiny crown of thorns and the weedy petty spurge produce a milky sap that causes skin irritation in susceptible people and animals. It can also cause lesions in the mouth and throat if eaten. Severe symptoms include abdominal pain, diarrhoea and kidney failure.

The bark, leaves and fruit of daphnes may cause ulceration or blistering in animals’ mouths and stomachs when eaten. Typical symptoms include drooling, vomiting and diarrhoea. The severity will depend on the species of daphne – some are more poisonous than others but all should be viewed with caution.

Grouped together because of their botanical similarities, azaleas and rhododendrons are both considered poisonous to animals, although azaleas are less so than their normally larger cousins. Eating the leaves or flowers may cause drooling, vomiting, diarrhoea and erratic breathing and pulse. 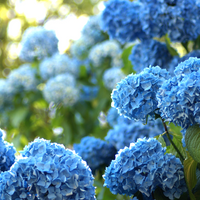 The leaves and flowers of the attractive shrub Hydrangeas contain toxins (cyanogenic glycosides) that, when consumed by pets, can cause vomiting, diarrhoea and lethargy.

Known to be poisonous to humans and animals, oleander contains toxins that affect the heart, specifically the electrolyte balance within heart muscle. One to be avoided in gardens where pets and children play due to the high level of toxins it contains.

Seed pods of Stephanotis can be problematic to dogs and the plant is claimed to cause allergic skin conditions.

Brunfelsia contains two toxins, one a stimulant and the other a depressant. When any part of the plant is eaten by dogs and cats, severe symptoms can arise including vomiting, anxiety, lack of coordination, tremors and seizures.

The bright red berries of holly, associated with Christmas in the northern hemisphere, can be toxic to animals and humans when eaten in quantity – 20-30 could prove lethal in an adult while as few as five could cause poisoning symptoms in children and pets.

Both cats and dogs can be poisoned by ivy, and the leaves are more poisonous than the berries. Symptoms include breathing difficulties, diarrhoea, excessive thirst, dilated pupils and overall physical weakness – all rather nasty!

Often grown for its soothing gel which can aid burns and skin condition, Aloe vera is poisonous to cats and dogs. It may cause vomiting, diarrhoea, tremors, depression and discoloured urine. What’s good for us is not necessarily safe for our pets.

Most types of bamboo, especially the clumping and running types, are safe for pets but the popular indoor plant lucky bamboo is not. If eaten, it can cause, seizures, breathing difficulties, lack of coordination and overall weakness.

The popular Sago Palm is one of the most toxic plants for pets – all parts of it are poisonous and eating just one seed can cause a catastrophe. Symptoms include drooling, vomiting, diarrhoea, seizures, tremors, lethargy and abdominal pain.

Lantana is a common cause of stock poisoning in Australia, and it can affect our pets as well. Eating the green berries may cause vomiting, anorexia, sensitivity to light and constipation. A declared weed in some areas, lantana is best avoided in the home garden. 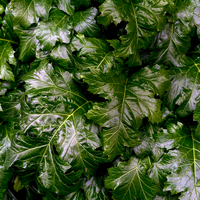 There is considerable debate as to whether Bear’s Breeches is poisonous or not, with reliable sources claiming the toxins are rarely lethal. It is said to cause mild to medium symptoms of toxicity in dogs, including vomiting, diarrhoea and lethargy.

All parts of Angel’s Trumpet are considered toxic, especially to dogs. It contains several hallucinogenic chemicals which may cause seizures, dilated pupils, confusion, vomiting and diarrhoea in animals and humans. A beguiling flower that hides its sinister effects well.

It’s alleged that dogs have been poisoned through commercial pet foods that contain raw meat from animals that grazed on one or more species of Indigofera. This native shrub is one to be avoided in the home garden despite its attractive flowers.

Foxglove is considered poisonous, although deaths in humans and animals are rare. It contains digitalis which, in minute quantities, may be used to treat human heart conditions. However, if parts of the plant are eaten, this same chemical can cause severe cardiac symptoms as well as vomiting. 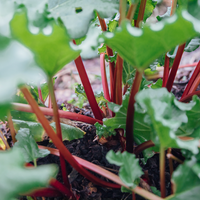 Rhubarb leaves are poisonous and should not be eaten or fed to animals or birds. They contain oxalic acid which can cause kidney stones and renal failure as well as burning in the mouth and stomach.

Other garden hazards for pets

The plants in your garden are not the only possible sources of harm to your furry friends. You might have noticed that most garden products such as fertilisers, fungicides, insecticides, snail and slug pellets, weedicides and even potting mixes usually include advice on the packaging to keep out of the reach of pets and children. Not all are poisonous, but it is far better to be safe than sorry.

Always store all garden products, including your tools, in a secure shed or garage that cannot be accessed by pets or children when you are not around to supervise. Where possible, place these items on high shelves out of reach and make sure steps, stools and ladders are well out of the way too, to prevent accidents occurring.

When you use fertilisers and other products, do so carefully. Scratch plant food into the soil to cover it and distribute evenly. If you need to use snail baits, place them in a designated bait trap that is firmly secured to the soil so dogs, cats and other animals cannot tip it up or get to the pellets inside.

Work-arounds for growing these plants

Gardening is all about enjoying the outdoors and creating an attractive, friendly environment for you, your family and your pets. While it is important to consider potential hazards and plant accordingly, often there are work-arounds that will let you still enjoy some of the plants mentioned here as well as others known to contain allergens or toxins. By growing these plants in pots or raised planters, they can be kept out of reach of animals or children. Another option is to grow them in garden areas that are not normally accessible when you aren’t on hand, such as the front garden or a fenced-off area.

You may like to take a look at these Raised garden beds to keep pets out by @LisasGarden.