How to prune citrus trees

Citrus trees such as lemons, limes, oranges, cumquats and grapefruit are evergreen fruit trees. They don’t lose their leaves in winter like many other fruits, so pruning them can be challenging. Some also have thorns, making them even more difficult.

They don’t need a harsh cut-back every year like their deciduous counterparts. In fact, if you prune them too hard or too often, they are inclined to put all their energy into replacing leaves and branches instead of into flowers and fruit.

The aim is to trim rather than prune to maintain a tidy shape and to encourage just enough new growth to produce abundant flowers and bumper crops. That said, an old lemon tree well past its prime can be rejuvenated by cutting it back to just the trunk and major branches. It will re-shoot prolifically and, in a few years, develop a complete new framework that will crop well for another few decades.

Make sure all blades and saws are sharp so they cut cleanly. Tearing of stems and bark may allow diseases to take hold. Dip tools in disinfectant before you start cutting to remove traces of sap and possible diseases, then dry and clean them. 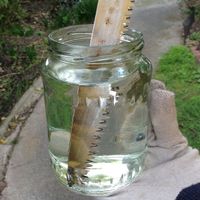 Citrus trees are susceptible to attack by a small wasp that lays its eggs under the bark of new growth. As a defence mechanism, a tree will develop “galls” (scar tissue) around the affected areas. Galls encapsulate the eggs, followed by the larvae which will eventually develop into new wasps that fly off. Citrus galls are unsightly and weaken trees. The best cure is to eliminate the eggs and larvae.

Until recently, cutting off galls in Winter before wasps emerged in early spring was the recommended treatment but pruning at this time is not appropriate – new growth can be burned off by cold weather. Today, the process is to “scalp” new galls, exposing the eggs and larvae inside and so killing them before they hatch. Cutting galls open can be done with a sharp knife or a potato peeler.

Old galls covered in holes can be cut off completely in spring. The wasps have emerged and flown off. It’s too late for “scalping” at this stage. 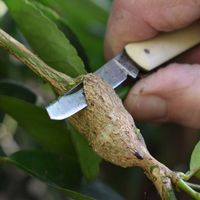 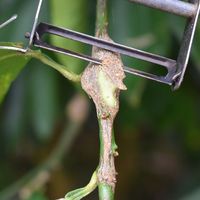 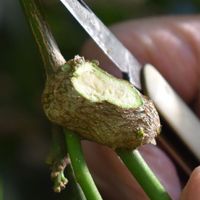 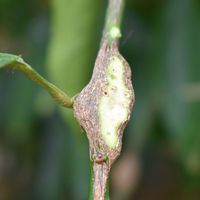 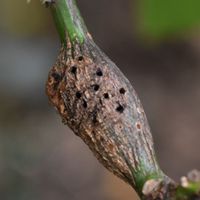 Once the galls have been treated, it’s time to look at the rest of the tree.  Pruning should not be done until the weather has warmed in spring and the likelihood of frosts, which could burn soft new shoots, has passed.

The main aim of any pruning is to encourage new growth but, in the case of citrus, this should not be at the expense of flowering and fruiting. A light touch is appropriate in general.

Where shoots are long and have developed a downward droop due to the weight of fruit, they can be trimmed back. Likewise shoots heading for the sky can be shortened so the fruits they bear can be harvested easily. Cut cleanly to avoid tearing the bark.

Citrus trees that have been grafted should have all shoots growing from below the graft union removed – these are vigorous rootstock growths that draw nutrients and moisture away from the variety growing on top. 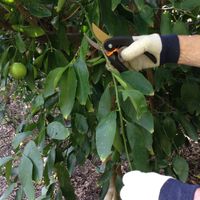 A well grown citrus tree should have an overall rounded habit with well-spaced branches that allow light to penetrate into the centre of the tree. Not quite as well clipped as a topiary but neat nonetheless. A program of renewal pruning to replace old branches over a period of years is key to a tree living and cropping well for many decades. 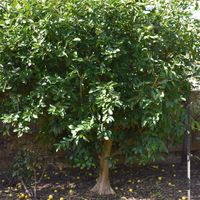 Continuing with tip pruning over the warmer months will help keep your citrus trees in shape.

Don’t be concerned if your trees drop lots of immature fruits shortly after flowering – the tree is self-managing the crop it can ripen without self-destructing. 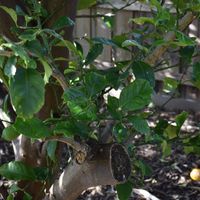 Be vigilant and always watch for pests like scale on your citrus trees. They are sap-suckers and will affect overall health and vigour if not controlled. An application of horticultural or white oil after pruning in early spring and again in late summer will aid in controlling them. 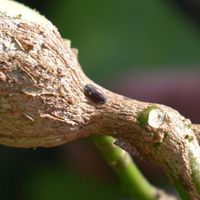