Low and slow the way to go

“Barbecuing has always been a national pastime in Australia. Cooking big slabs of meat while sitting around with a few mates. What’s not to love?”

Workshop member MoonshineBen is an avid “low and slow” barbecue connoisseur. He has plenty of mates. Ben is part of a rapidly growing tribe who have moved on from quickly cremating sausages and steaks to patiently slow-cooking huge, succulent pieces of meat over many hours.

Ben sees interest in slow-cooked food continuing to develop in this country. “It’s really growing in popularity and is nowhere near peaking yet,” he enthuses. “We’ve got more barbecue restaurants popping up, and food trucks, and the fact that we have a sanctioned competition circuit is incredible.”

Ben’s barbecue flame was ignited about three years ago when tasting beef brisket for the first time, a popular cut from the animal’s chest.  “I had my first taste and I was hooked,” he says. “I’ve always been a meat eater, but this was something else.”

Understanding what smoke does to food

With his own skills largely self-taught, Ben says there is an “amazing” amount of material about barbecue cooking online. “Like most things I learn, I grabbed some books, watched some videos and just jumped into learning it.

“I’ve cooked a lot of things in the early days that didn’t really work out, but over time, you find the things that work, and build on those. Slow cooking was something that I have been doing for years, so my basic theory on how heat breaks down meat was pretty sound. The hardest part was understanding smoke, and what it does to food – there’s such a thing as too much!”

Ben has also been fortunate enough to garner knowledge and experience from some of Australia’s best chefs. “Over the

Ben’s barbecue flame was ignited about three years ago. last few years I have helped a friend out with a food website, and along the way got to know a few of the chefs, and was lucky enough to have their advice on flavour theory.”

While some people consider it a chore, Ben finds cooking very relaxing. “To spend the day preparing and cooking is just perfect for me.”

Sundays are usually spent smoking. “I will pick a cut of meat and cook it up, document and post about it – if it works! Sometimes it doesn’t, but even then I am happy to mostly post it up as it can still taste pretty amazing.” Ben also enjoys spending time with the family, playing golf, strumming a guitar or “kicking back with a movie”.

Tips for your next barbecue

When asked about tips he can share with wannabe barbecue chefs, Ben says preparation is key. “It’s not the kind of thing where you typically decide to do on a whim. Getting set up takes about an hour, by the time you prepare the meat, set up the smoker, and get your barbecue started and up to temperature.

"I tend to prepare the day before, go to the butcher to find what I will cook, make sure I have enough fuel to keep it going and then get started in the morning to serve for dinner.”

Patience is also very important. Ben says a common mistake is not giving your barbecue enough time to get to temperature. “You have to make sure your temperature is stable, because if you put the meat in before it’s where it needs to be, you may get fluctuations and it will cook too quick and ruin it.”

The best piece of barbecue advice Ben has ever received is what he now describes as a “mantra” for barbecue aficionados - “If you’re looking, you ain’t cooking…”

“It’s tempting when you first start to keep checking in on the meat, but the second you open the lid, you lose heat and smoke,” Ben says. “If you’ve got the basics right, you just need to trust the process that when you open the lid in four or five hours, it’ll be all right. Internal temperature of the meat matters more than the time you cook it for, so you can often be going for seven or eight hours depending on the cut, but don’t be tempted to check in too often.

“Set yourself up for success from the beginning. Make sure you have enough fuel and you’re using a method where it will keep stable for a long period of time.”

Living on the fringe of the city in Sydney, Ben doesn’t have a lot of space for barbecue gear at home. “I have one dedicated smoker, which is a drum-style smoker, and I also have the kettle, which is perfect for smoking and grilling. I use a combination of Heat Beads and lump charcoal, and usually apple or cherry wood as it’s a lighter smoke flavour. For stronger smoke, I use hickory.”

Other essential items according to Ben include a chimney starter to get the charcoal going. “The design helps airflow and lets you get them ash over quicker to start the cook. Also, a good thermometer for the barbecue, as you want to be measuring at the plate level, not just under the hood. Lastly, an instant-read meat thermometer so you can quickly check internal temps without having to leave the lid open too long and lose heat.”

Ben says he would love to have an offset smoker at home, but might have to knock down a few walls first! “Would love to cook bigger cuts for friends and family,” he says. 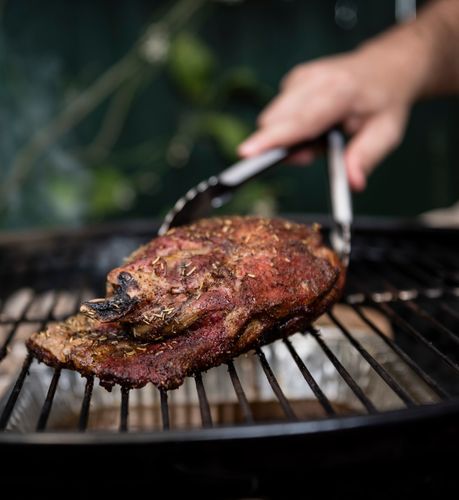 Ben says preparation is key when it comes to slow cooking.

When asked about his favourite cuts of meat to cook, Ben says beef short rib has been a long-time favourite, but more recently also beef cheeks. “They’re small, but they are packed with flavour when done right.” Lamb shoulder and lamb shanks “also rate pretty highly,” he adds. “And I put a spin on an old slow cook recipe recently using pork neck and a wet yellow curry rub and it was a flavour bomb. Will be doing that one again.”

Ben advises that a lot of the cuts for low-and-slow barbecue such as brisket, short ribs and pork ribs aren’t typically stocked in supermarkets, apart from lamb shoulder and shanks. He tends to source his meat at local butchers.

Married with three kids, Ben works in financial services but also now has a sideline business selling his own barbecue rubs.  “I’d used commercial rubs for years, and even mixed up my own from recipes online, but they always had a whole lot of ingredients in them that produced great texture, but nothing distinct in terms of taste.

“I wanted to create something that was flavour first, and different flavours to what you’d expect. So we cap our ingredients at no more than six and use some tried-and-true ingredients and some others that you don’t typically associate with barbecue.” One such unusual ingredient Ben recently shared on Workshop is coffee.

Ben reckons he is “terrible at gardening” but his kids are keen to have a flourishing fruit and vegetable garden, so he has recently been busy planting. Not surprisingly, when in Bunnings Ben can usually be found in the barbecue aisle, but he is also often in the timber section. “My son loves building stuff,” he says.

Ben says he has “always been a big fan of online communities” and was drawn to Workshop for the opportunity to both share and learn. “I love to share what I know and learn from others. The thing you will notice about the barbecue community in general is how willing everyone is to support each other and share knowledge.

“I spend a lot of time online learning from others, and I think it’s important to also contribute to that. Communities are incredibly powerful things, and when you can come together with people around a share interest, it becomes bigger than itself.”