How do you keep possums away? 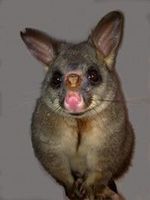 If you want to deter them from eating ornamental and edible crops, it might be worth trying something like Yates 1L Ready To Use Possum Repellent Spray which is a foliar spray you apply directly to the plants.

For hard to reach treetops where they might arrive from other high places, you could use Multicrop 2L Scat Animal Repellent which has an adjustable spray nozzle. If you adjust the nozzle to a thin spray, it will travel close to the 5 metres. It would be advised to spray around the base of the tree so they don't use that as an alternate route up it. - MitchellMc

I can tell you one thing that doesn't work - those plastic owls. I would try odour repellants based on this: "A recent Deakin University study into 14 alleged taste and odour repellents found that when possums were hungry none of the taste repellents tested stopped them from eating what they wanted. But five of the 10 odour repellents appeared to have some effect. These included naphthalene flakes, blood and bone, and garlic spray." - greygardener

Spotlights with motion detectors can work well. You just need to know which trees or wires the possums are using to get into your garden and position the lights accordingly. They will soon avoid the area. - MartyH

I have heard that sprinkling chilli powder or some other spicy/hot powder on the fruit or veggies that they are eating will deter them. I haven't personally used it but have heard it from many sources. You just need to ensure you wash the fruit and veg before you eat them! - Branchy249

I've had some real success with bark chips from the quassia tree, which is a plant found in the West Indies.

The bark contains a very bitter resin, which the plant uses as an insect repellant, but if you boil the bark chips, you end up with a very bitter liquid you can use as a spray which will make your plants taste horrible to a possum, or pretty much any other sentient being.

I've used this stuff to protect an ornamental grapevine. I had problems with possums eating all the new growth (they would munch on it as an entree on their way to visiting a fruiting loquat further down the fence). I started spraying the quassia bark spray, and the possums soon learnt my grapevine wasn't as tasty as they thought it might be. - Don_the_Berk

I recently got recommended this - SCAT. https://www.bunnings.com.au/multicrop-2l-scat-rtu-animal-repellent_p2960120. Must give it a try with the spring vegetables.

This is also an interesting idea - Whites Garden Sentinel Motion Activated Pest Deterrent. Whites Bird Spike Pest Control Garden Sentinel is a useful tool to protect your crops, gardens, backyards, ponds and other open areas from unwanted animals in a safe and humane way. The smart infrared sensor activates a three-second burst of water with adjustable angle, range, and sensitivity. It has a garden hose attachment and optional eye and beak labels. - Isobel

Possums are territorial so not easy to keep away. A good solution if they are in the roof is to erect a possum box in a tree near the house. You can lure them with some fruit. They will typically prefer to live in the box than in your roof. - Mick

I'm a wildlife rescuer/carer and I currently have two possums rehabilitating in my backyard. Have a read of this article as it has some good suggestions: Living with Possums . - Deanna

Whether we like it or not possums are a native animal and are protected in Australia. They are by no means as big a problem here as they are in New Zealand. My resident possums are now leaving my fruit and vegetables alone since I have been feeding our local family. They love bananas, pawpaw, sultanas, pear and stone fruit. They arrive on my balcony at 9.00pm sharp every evening for dinner and they are quite affectionate. I look forward to their visits and they now leave my crops alone. Give it a go. - pjturner2008

We have a lovely feature feijoa tree in our back garden. Only problem is the possums love it as much as we do. We've given up expecting fruit. Now we're just aiming for foliage on the top 2/3s of the canopy and an end to the boundless possum poo under the tree every morning. The possums are accessing the tree from across a brick and timber boundary fence. Spraying the foliage would be challenging as the tree is in a raised bed and is 4-5 metres high. Any thoughts for something that could be applied to the wall and fence? Or will this just encourage them to climb the tree from the ground up. Our dog refuses to sleep outdoors at night so he's not an option. - kjs

I’ve tried 2 plastic falcons perched in fence posts - useless. 1 reflective owl with bells - useless. Mothballs in plastic hangers - useless. Cloudy ammonia in plastic jars with a hole in the lid and piece of rag coming out top (like a wick) - useless. My next trial is a handful of blood and bone in old stockings hanging off fence posts and garden shed. - bect73

I had a different and humorous approach with "chicken wire" over a roofing iron fence and star pickets, but it could be over any boundary. I tied it well at the bottom but tied the top with bungee chord and 100% success. They climbed the chicken wire and it bent outwards away from my crops, capsicums, tomatoes, corn, bok choi and when they reached the top they would step off onto the ground hehehehe. They soon got sick of that hehehe, the wire would spring back up like a fence. - colinw

I had a severe problem with possum eating my fully grown mangoes or pumpkins or Oranges when I was about to Harvest a few years back!

I was very keen then to grow all veggies in my small backyard and was committed. Though I had good success with Chillies, Snowpeas, Cucumber, Capsicums, Beetroot, Carrots, Jelaprnos, Lebanese eggplant, partial success with Cauliflower, Cabbage, Tomatoes. It was a total disappointment with possums eating or biting a large chunks of Pumpkin, Mangoes Oranges.

I was able to protect my veggie patches on the soil which had plastic edges by installing a series of wooden poles around the patch standing firmly 3-feet apart with metal hooks screwed into them at the top, middle and bottom, later wrapping them with white nylon bird mesh that is sold in Bunnings without leaving a gap anywhere for entry! - manisalem45

That total exclusion method has worked the best for me in the past. I left the top open on mine and just had the netting running vertically around the bed's perimeter attached to stakes. I'm not sure if the possums didn't like climbing up the netting, but they didn't get inside. The benefit of the open-top was that I didn't need to pull it back each day. - MitchellMc