What is the best way to cook a steak? 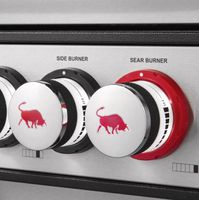 Scorching hot grill with a thick fillet steak about 2 inches thick, sprayed with olive oil. 3 minutes on each side max. Wrap in foil and leave for 6 minutes before serving. - cupofchloe

Olive oil, salt and cracked pepper. Piping hot BBQ, 3-4 minutes each side but I turn constantly. I feel it helps seal the meat and retain more juices. Depending how hungry I am that will determine whether I let it rest or not.

When I am at home, I will mostly go for rump. It is a very good steak if cooked right - ie., never more than medium rare. I don't trust a restaurant to give it the love that I do. I let them cook softer cuts that are harder to mess up! - Fyre

I went to a demo for the new Everdure charcoal barbecues and the chef was saying that Heston recommends turning your steak constantly - every 10-15 seconds. Apparently he did lots of scientific experiments testing various methods and constant turning was the best. And make sure when you rest it that you don't put it on a plate but rather a cake rack. The scotch fillet that I sampled was fantastic! - Jason

I cooked a fantastic eye fillet on the BBQ last week. Decided I would try to cook it slower than usual so put the burners on high over the grill and on low over the hotplate. Fillet was brushed with oil and seasoned with salt and pepper. I put the fillet on the grill to seal it just for a few minutes each side until crusty then turned the grill burners off. Put the hood down and left it for about an hour. Temperature was around 150 which was a little warmer than I wanted but it turned out great. - Kermit

Piping hot BBQ is the best way to sear the meat and lock in its juices. I only ever cook my steaks on my BBQ, pan fry just doesn't cut it. Olive oil, salt and pepper - no need for anything else if you have good quality steak. I love a thick T Bone or Scotch. - AshY

Regarding resting, I went to a BBQ cooking demo last week and the chef stressed the importance of resting any meat after cooking but said don't wrap in foil as it’s not that different to keeping it in an oven - it will continue to cook and isn't really resting. Everyone obviously then said "but won't it go cold?" to which he replied yes, that's why restaurants serve on hot plates. - Kermit

A hot barbie with sausages still sizzling not quite finished cooking. I place my steak with them but only turn when the feeling tells me too and when the sausages are done then I remove both which usually gives the steak about four maybe five minutes on the grill. I love the taste of sausages and do not like to put sauce on a beautifully barbie cooked piece of meat unless it tastes off. The fat from the sausages is enough to cook the steak in. By the time it is taken inside and salad placed on the plates is enough time for the steak to settle. Love that medium rare steak. After I have demolished the steak then I will go back for sausages. - John1

Another way to cook steaks is to cook them in a pressure cooker (or slow cooker) first, then sear on a very hot plate/griddle to caramelise for flavour & appearance. I heard that's how a steakhouse prepares theirs. - Andy_Mann

For those unfamiliar with the reverse sear method, it's in the oven or smoker until medium, then into a screaming hot skillet for a minute a side. Usually needs a pretty thick steak. - MoonshineBen

I remember seeing a YouTube vid done by Australia's highly acclaimed Tetsuya Wakuda, he advocated keeping it simple by seasoning with pepper & salt, on a low simmering pan, & turning the steaks regularly to avoid searing to deliver the nuances of the beautiful meat. The vid that I'm linking here, isn't the one, but close enough:

I’ve switched to constant turning. It does seem to lock in the juices a little better and it's also easier to get the steak just right. Sticking with this technique now. Had a ripper steak sandwich on the weekend! - AHoy

I think the old "never turn a steak more than once" is just an outdated myth tbh. There's more science to it now which has probably even converted whoever came up with that rule/myth in the first place. I used to follow the rule, until I learned better ways of doing it. On the note of 'myths': http://bbqworld.org/7-grilling-myths-you-should-stop-believing-right-now/. - ProjectPete

I find the best steak is one that has been marinated overnight in olive oil and steak seasoning making sure you pierce the steak with a fork all over before marinating.  Then first onto the open grill to sear it fast turning twice then depending on personal taste to complete the cooking on the flat top on the BBQ.  - jonno172000

Labels:
31 Views
0 Likes
Like
Version History
Last update:
a month ago
Updated by: