A dated 1970s kitchen and seperate laundry were transformed to an open-plan kitchen and family room, which became the central hub of the home. 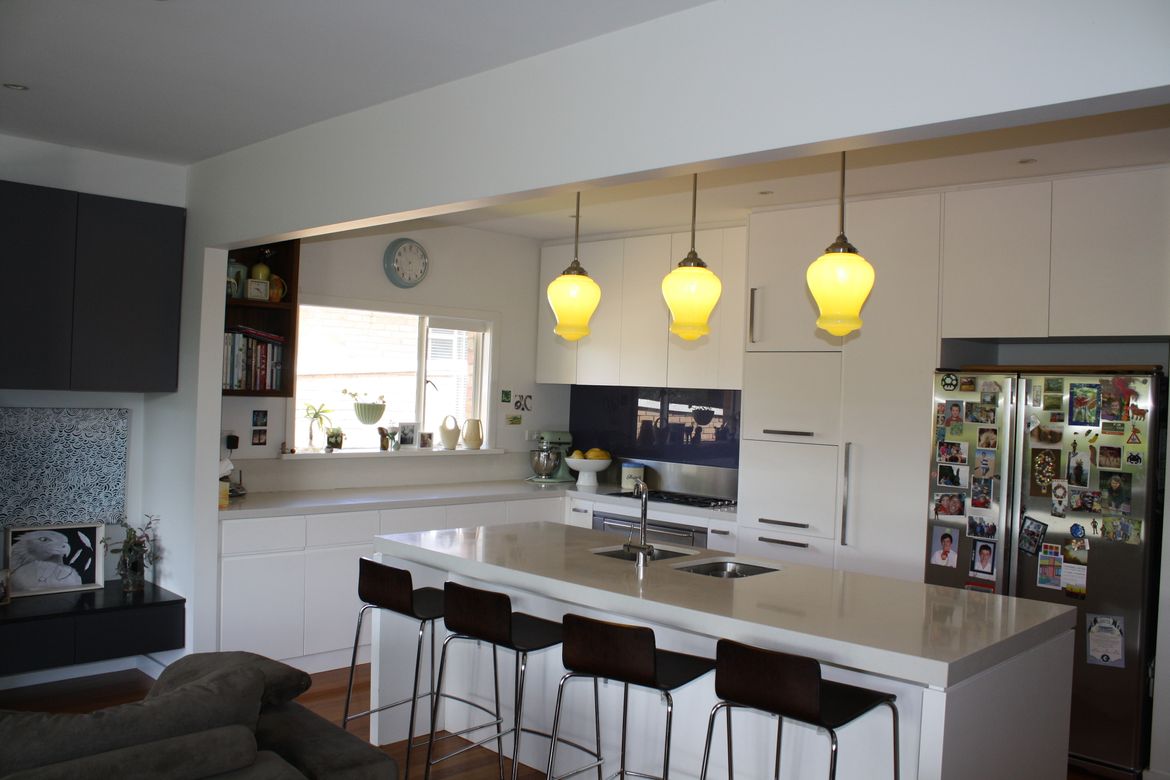 We inherited a "groovy" 1970s-era kitchen when we purchased our house. Not only was the decor horribly outdated, it was a dark area and lacking in bench space.

Behind the kitchen was a reasonably large laundry (where the window is in the photo above). Both the kitchen and laundry used to be the end of the 1950s-era house, but a family room had been added in a 70s modest renovation and was obviously when the kitchen was last remodelled.

Rather than opt for a cosmetic makeover, we chose the sledgehammer. The old laundry was behind the kitchen so we trashed the lot to open the space right up to the living area, adding skylights to ensure plenty of light and a large island bench. The laundry is now behind bifold doors as part of the kitchen. The centrepiece of the renovation is the large kitchen island bench which includes a double sink, under-mounted dishwasher, plenty of storage, loads of bench space and accommodates bar stool seating.

The old laundry was a decent sized room so knocking down the wall separating the laundry and kitchen gave us much more room to work with. My guess is that the laundry room was something like 3 x 5m.

The European-style laundry that we installed behind the bifolds has been more than sufficient for our needs. On the left hand side we have a washing machine with a dryer hanging above it. Then we have a benchtop with a sink that has a cupboard and a laundry hamper. There are open shelves above and a single drying rack. On the right we have a broom cupboard with more shelving above. You can see most of it in the picture below, except the broom cupboard which is behind the bifolds.

Going with a European-style laundry was the right choice for us. We got to keep plenty of storage and open up the area. The biggest sacrifice in not having a dedicated laundry was losing somewhere to store clothes horses for drying clothes (we do that in the study). In this setup you also ideally want a reasonably quiet washing machine. Ours is a little noisy on the final spin cycle!

We certainly love how much kitchen storage we have. We have two large pull out drawers next to the oven for pantry items, jars and food containers. They are very convenient - fantastic for maximising storage space and allowing easy access to a lot of items. The two cupboards above them are appliance cupboards - the higher one for a microwave, the lower one has a pull-out base and houses things like the kettle and toaster.

We were lucky with the pendant lights. We bought them at a market before we had started the renovation and just hoped they would work - particularly the colour. They seemed like a bargain at the time, and we've since had people say they think they are French glass.

Opening up the kitchen to the living area was the best thing we could have done to improve the whole house. It ensures the kitchen is the centre of activity in the house, especially when entertaining friends and family.

We didn't have to replace a load bearing wall in the renovation. We only knocked down an internal wall which was not load bearing. But our engineer did recommend two timber beams to support the flat roof, which you can see divide the kitchen from the family room. I remember our builder thought it was overkill at the time but we were happy to be conservative. We did have the option of going with steel which would have been less obtrusive but obviously higher cost, but we liked the idea of separating the two rooms a little with the beams as it's a reasonably large space, particularly in relation to the rest of the house.

It's now 15 years since we renovated, but it still looks great.  I imagine most people would say the open-plan kitchen and family room is the best feature of the house. It's a really functional space but I especially love that when friends and family come over they just naturally gravitate to hanging around the island bench, sharing food and stories.

More inspiration for your renovation project