I planted this native garden in timber boxes just before Christmas, and thought I'd share what has died, survived and thrived. Being lazy, I chose drought hardy natives so they'd survive on rainwater only and require no maintenance.  Alas Brisbane had plenty of rain in February causing a few plants to die as they had too much water! Most plants from Bunnings and all were small plants under $20 when purchased.

I went with the thriller, filler, spiller model, with one large shrub in each planter box as the thriller. This space has early morning sun then shade for 70% of the day.

1. The grey/green spiller. This is Desert Pride or Eremophila Kalbarri Carpet. These babies have gone bananas, they were 3 or 4 stems about 10cm long on purchase and are now loads of stems of 20-50cm long. Love them.

3. Robyn Gordon Grevillea - slow growing but going well and has given me two rounds of rather nice red flowers in the last 6 months.

5. Night Jessamine - I bought these as they were on sale for about $5.  They went absolutely ballistic and grew to 6 feet high and wide in two months.  Too much for me so I sold them on Facebook for $30 each.  Note these are a weed if they get out into the bush, competing with natural flora.

In a separate pot doing very nicely is a Sublime Fruiting Lime.  Looks lovely and may well adorn a G&T one day.

Ascot Rainbow - I started with three of these. One has done well and really grown while the other two hung around for 4 months then seemed to rot and die. Too much rain early on I suspect.

In a separate pot I have a Star Jasmine. It went crazy over summer but has barely grown at all since March. We'll see what happens in Spring.

Kangaroo Paw - I failed to heed the warnings because they just looked so nice at the store!  Too much rain and one rotted and died within a month.  I cut the other one right back and it's still there but hasn't grown much at all.

Also worth noting is that I used a decent potting mix.  I'm usually tempted by the $3/bag stuff, but took the Bunnings staff member recommendation to buy something decent and used 70% Searles Premium Potting Mix and 30% soil on the bottom of the boxes.

Hope this is useful to someone.  Cheers. 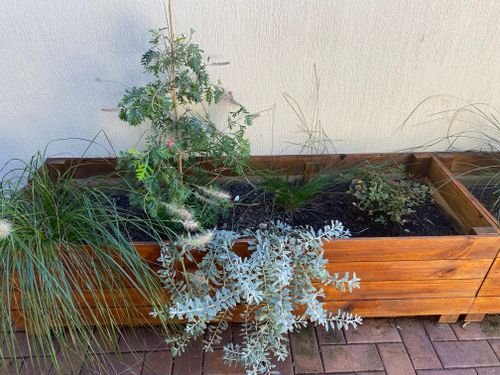 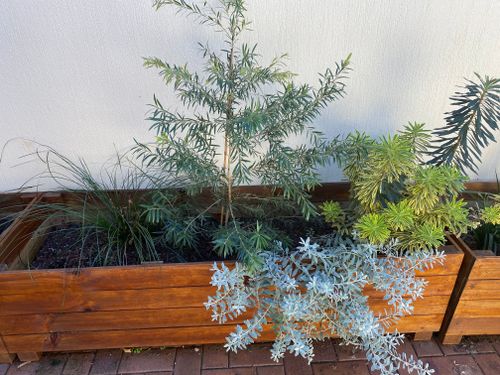 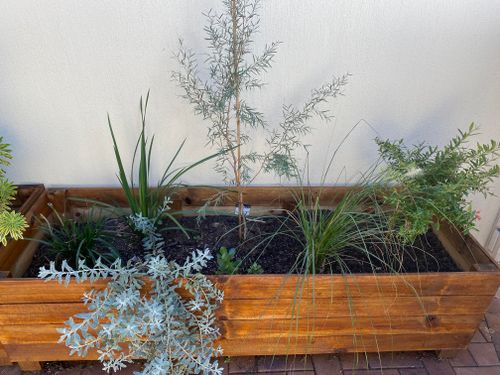 Many thanks for contributing your experience, @Ari. I trust it will be beneficial to our members considering planting out natives.

I love your thriller, filler and spiller method as it really covers all bases and ensures a beautiful arrangement.

It sounds like there could be a nice little business opportunity for you with the Night Jessamine at a 500% profit margin. Maybe you should pick up a few more and grow them out?

Please keep us updated on their progress, and thanks again for taking the time to pass on these details.