How to prune roses

Roses flower on new shoots and never on old wood. Pruning in winter while roses are dormant encourages abundant new growth when the weather warms in spring. The flush of shoots will result in an abundance of blooms. Having healthy, well-shaped, bushy plants is also important.

Pruning when plants have lost their leaves makes it easy to see the basic shape or frame of each plant.

In warmer regions, roses don't go through true dormancy. They will drop most of their leaves at the end of the "wet season" (autumn) but then go on to produce new shoots fairly quickly. It’s best to prune when the leaves have dropped although plants will respond well at almost any time of the year.

Make sure your secateurs, loppers and pruning saw are sharp so they cut cleanly. Tearing of stems and bark may allow diseases to take hold. Dip the blades in disinfectant before you start each plant to remove traces of sap and possible diseases, then dry and clean them. 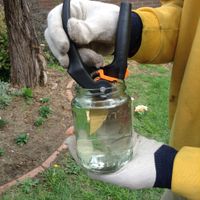 Stand back and assess the rose you are about to prune. Look at its overall height and shape. Consider how much growth it produced last season and how many flowers it had. Also assess the health of its main frame (older branches). Take all factors into consideration when deciding how you should prune it to reinvigorate it.

The rose bush pictured is a 20-year-old Apricot Nectar, a very vigorous and free flowering floribunda variety. It grows at least 1.5 metres tall each year and responds well to quite severe pruning. The base of the plant is quite woody but the branches growing from it are no more than two or three years old. 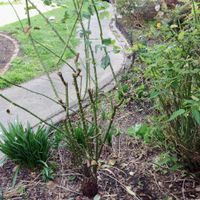 Start by cutting out old, diseased and damaged branches as close to the main trunk as possible. Then remove spindly twigs and branches that are congesting the centre of the bush and crossing over or rubbing against one another.  Cut branches off cleanly. Don’t leave stubs as these will die back and could be entry points for diseases.

Remove all stems growing from the rootstock, below the graft union. 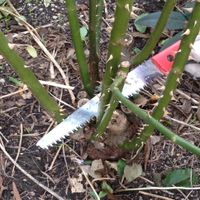 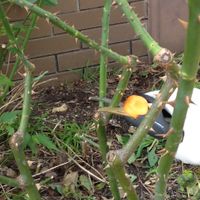 Reduce last season's healthy branches by about a third, cutting cleanly just above an outward-pointing bud or node. The shoot from that bud will then grow outwards, away from the centre of the plant. The objective is to encourage as much new growth as possible close to the main frame of the bush but leaving the centre of the bush open.

Any tall “watershoots” – the soft and vigorous stems that grow from close to the base of the plant - are best left alone apart from trimming off the faded flowers at the top. They will mature over the following season to replace older branches that are past their best. 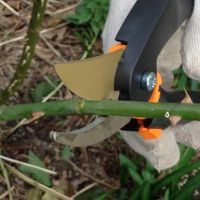 When you think you have finished, stand back and look critically at the bush as a whole. Further cutting may be needed if it is obviously lop-sided or there is still quite a lot of old wood present. Expert pruners have a good motto:  “If in doubt, cut it out”.  It works most of the time! 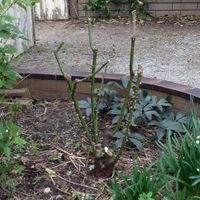 Collect up and dispose of the prunings and leaves into the household rubbish. Do not add them to the compost bin as they could harbour diseases like blackspot or mildews or pests like scale and aphids. 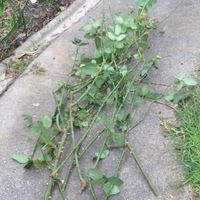 During peak flowering times over spring, summer and autumn, encourage more growth and flowers by snipping off spent flowers (known as dead-heading). Most roses will have at least two flushes of blooms – in spring and autumn – while others are "recurrent", flowering continuously for months at a time. 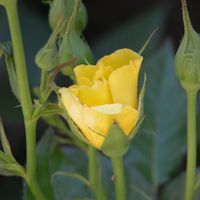 For those with groundcover and miniature roses, pruning is far less systematic.

Most groundcover roses are reasonably vigorous and will produce a lot of long, strong stems every year. The best approach is to use a sturdy pair of loppers and chop them off about 10-15cm above ground level. This will result in "stubble" at the crown of each plant. In Spring an abundance of new stems and masses of flowers will appear.

Miniature roses can be treated similarly, although some growers prefer to prune them in the same way as larger bush roses.

Spent some time in the garden over the weekend, including pruning the roses and doing the edges. Thanks for sharing your wisdom with us @Noelle, I used your guide to ensure I got a good result.

Glad you found the information helpful!

In most places it is still a bit early to prune roses - best to wait until at least the end of June or into July when the bushes are completely dormant.

Early pruning can, in some instances, result in new growth appearing in the next few weeks. These soft young shoots are very susceptible to cold winter weather and usually will not survive. This means the buds you have cut to are spent and will not re-shoot in spring. Here's hoping your roses will be OK.