Got another project underway. It wasn't meant to be a big one but a couple of issues that we knew about ended up being a bit more of a job than planned.

Initially the issue was the caravan failed a Warrant because - get this - the two rear lights were slightly different colours to each other and the marker lamps at the front weren't working. I replaced the rear lights easy enough but the front lights were going to be a mission. I was getting nothing out of them at all so I'd need to trace the wiring. That was most likely going to be a panel removal job.

As it was that was going to be easier thanks to the fact that when doing the rear lights we noticed the framing was rotted in some places. That meant we'd have to remove everything to see what was good. Let's just say we're reframing the entire caravan.

This raised the biggest problem I had. How do I replace the rear. I was on my mail run when the answer came to me. It's easier than you'd think so I'd like to share it. 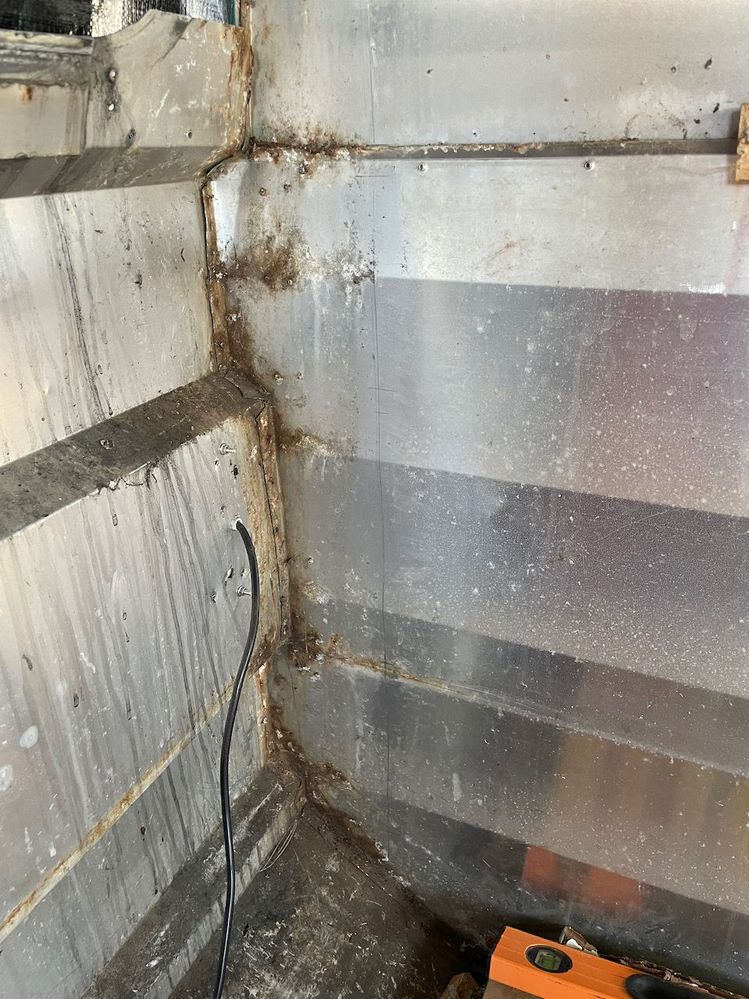 The front and back obviously have weird angles and the like. It was blowing my mind as to how I was going to transfer this to a new board. I couldn't use the original because it was rotted out. Like I said, the solution came to me when I was riding my work bike doing my mail run.

I am using a 180 x 18 H3.1 treated panel at the back. This means I have a fixed width to work my measurements out with. Measuring 180 from the deepest part gave me a straight line right down to the bottom angle. From this point I placed a ruler and a level to mark out where the bends go. You might be able to see the marks in the above photos. Doing this allows me to measure each section.

Adding the measurements to a drawing allows me to see if it will work. Then comes the fun part: 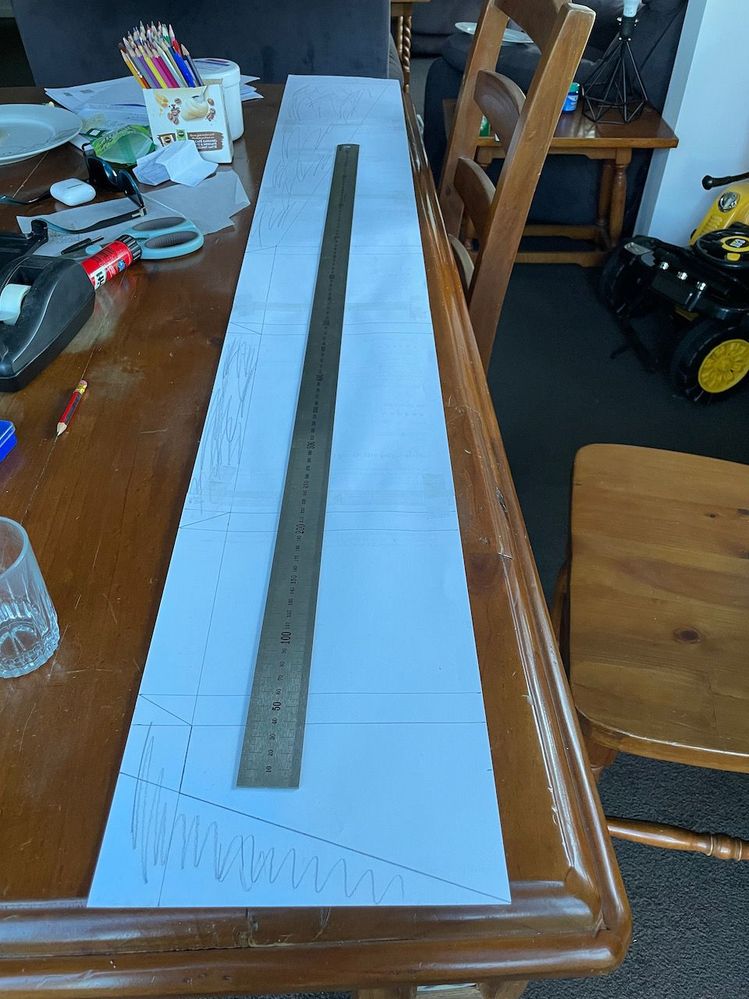 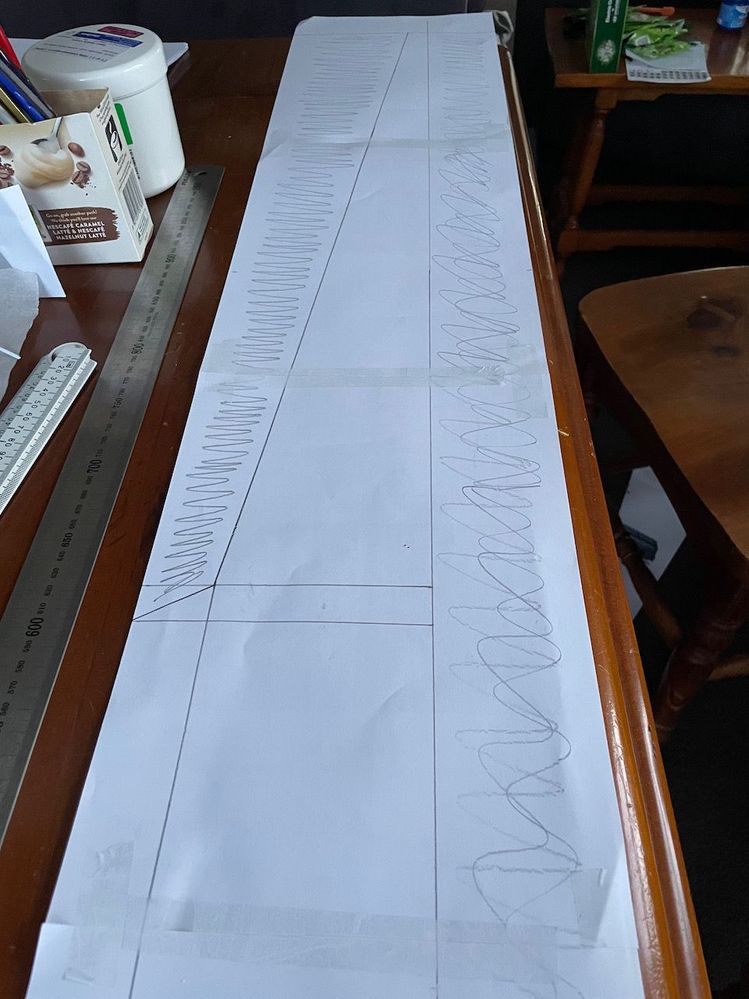 I taped 5 sheets of A4 paper end to end to give me the ability to make a 1:1 template. The above pictures are wrong because I drew the template at 140 wide. This was also the second one because on the initial one I forgot to measure any width and so drew it based on the entire width of an A4. This makes the top and bottom angles completely wrong. I ended up having to create a third template for 180mm to get it all right. The end result is:

My plan is to use 65mm H3.1 treated timber for the rest of the framing. I will be joining them using half-lap joinery. This will create squared joints and with glue and brad nails will be super strong.

I did read some great articles here at Bunnings Workshop and will be picking everyone's brains for help as I need it. Looking forward to this project.

It's great to see another caravan project in the works @woodenwookie. No doubt @linfrank and @twocutekelpies will be keen to follow along and hopefully can offer some advice.

That was an ingenious way of marking out your template, and it seems to have worked a treat. It appears to be a running theme with caravans that rot is seldom located in just one spot. That timber frame seems to wick moisture along it, spreading the damage much further than just the leaking section. I guess the high humidity and heat inside the enclosed cavity is a perfect breeding ground for rot.

I'll be thoroughly looking forward to following along with your project. I've been vicariously living through our members' projects and trying to avoid purchasing a caravan myself.

Nice work on starting the frame replacement. I've had to do the same in my little Franklin as most of it was missing. I've used tassie oak on the sides and meranti on either end for the bigger framing and coated both liberally with linseed/turps mix to help protect it. Looking forward to seeing how your project progresses.

I'm glad you've done this sort of thing before @twocutekelpies. I would like to know how I attach the frame to the aluminium or do I not need to worry?

Thanks for the tip about the linseed and turps. Do you have a ratio to use? If I'm using treated timber is this a requirement even?

Have a look at the cladding, you may find it was fastened originally using either nails or staples to hold it in place until the trims/j rail went on. I found a narrow crown staple gun works well and the heads will be hidden once the trims go back on if you only use them along the edge.

The linseed/turps mix is 50:50 mixed well but don't brush on too thick or it stays sticky, not sure if needed over treated timber but can't see that it would hurt it, better to have too much protection than not enough and it's cheap enough

@twocutekelpies, would it be possible to use something like No More Nails to adhere the frame to the caravan? The only possible issues I could see would be heat and maybe rigidity but it would prevent the need for more holes in the caravan. 🤣

@woodenwookie  you could glue it in, just make sure it's a very flexible adhesive, some brands dry hard and the bond will break as soon as you hit the road, need to allow for the caravan's flex. Have a look at some of the Sikaflex adhesive/sealants, some have permanent elasticity, you could seal your joins from behind as well as fix your frame in place. Make sure anything you use is compatible with aluminium, you don't want anything corrosive. (eg acetic cure silicon is a big no-no)

I've settled on the Selleys Heavy Duty Liquid Nails. It seems to fit the needs of what I'm trying to do.

Thanks for your help.

How to protect your plants from summer heat