How do I fix the holes in my gutter?

How do I fix the holes in my gutter?

Hi guys, I noticed there are holes in my gutters (one on the opposite end from the down pipe and another in the middle of the gutter) and these have caused the rafters to rot. How do I fix the holes? Do I need to fix the gutter alignment so that water will flow towards down pipe rather than the other end? And do the rafters need to be changed?

Many thanks in advance. 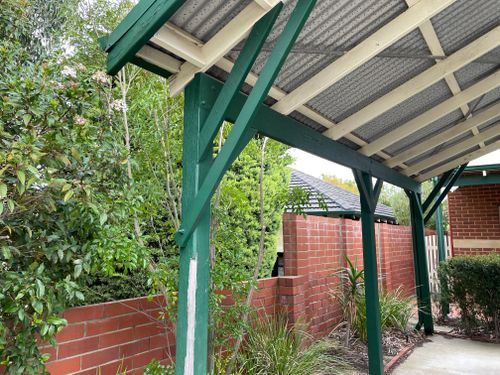 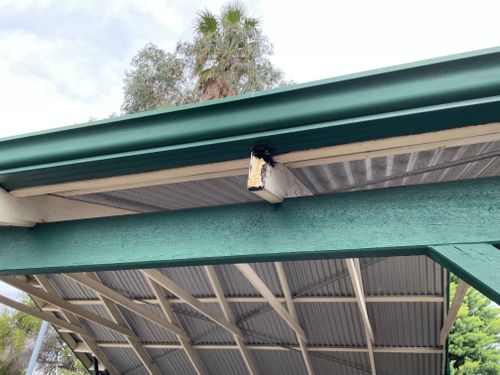 Welcome to the Bunnings Workshop community @ee. It's a pleasure to have you join us, and many thanks for your question on gutter repair.

There are a few easy-to-use patching products that can be applied to the gutter's interior over larger holes. Those include the Consolidated Alloys 75mm x 3m Weatherproof Byute Flashing Tape and Bondall Fibre Fix Rigid Patches. Alternatively, if they are only pin-sized holes, you can use a paintable product like Gripset Betta 1L Weather Seal or the tube-based Dunlop 310ml Grey Roof Repair Waterproofing Adhesive. There is also a convenient Selleys 315g Roof and Gutter Spray Seal which you might like to consider.

If the gutter's interior is rusting along the entire length, it would be a good idea to paint all of it with the Gripset Betta 1L Weather Seal. This will give you several more years before needing to replace it.

There should be at least a 1:500 or 2mm of fall per meter of gutter to allow adequate drainage. If this is not the case, then you should look at adjusting it.

You'll need to do some investigation to find out whether the rafter needs to be replaced. Dig out the damaged and soft timber with a screwdriver to see how far the rot has travelled. If it is only superficial, then you can fill it with Builder's Bog and paint over it. If the rot has reached that beam and is now a structural issue, you'll need to replace the beam.

Hi Mitchell, many thanks for the advice. Really appreciate that. I’ve one big hole and one small hole. I’ll give Selleys roof and gutter spray seal a try for the small hole as I read it works even when it’s wet. As for the big hole I’m going to try consolidated alloy tapes but the tricky part is to wait for the gutter to dry in this weather and with the wrong slope.

Do I apply the spray/ tape to the outside or inside of the gutter?

The water is accumulating at the opposite end from the down pipe so I’m very sure the gutter is having the wrong slope (I took a photo to show it). How do I adjust the slope/ gutter bracket? Is it a job that’s possible for me to tackle it myself?

Again many thanks in advance. 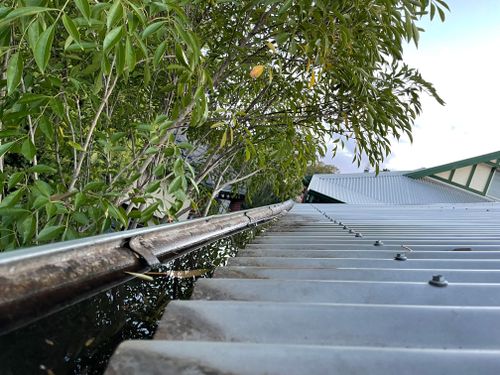 That appears to be a great deal of water sitting in the gutter, much more than what a correct fall would drain. It's a bit hard to tell, but it looks like halfway along the gutter length it has sagged. This could be causing the water to pool at the far end. If this is the case, simply raising the middle bracket might correct the overall slope, fixing the issue.

If the lowest point is not the middle and all this water is sitting down at the far end, then it looks like the gutter might have dropped at that end past horizontal. Even if there was no fall and the gutter was parallel to the ground, it still wouldn't fill up with water as it appears to have in your image.

To increase the fall, you would remove the guttering from the clips, then remove them from the beam. Starting at the far end, you would incrementally raise and fix the brackets back to the beam inducing a slope. A string line and level will assist in this process. I'll hazard a guess and say you should also add several more gutter brackets, as potentially not enough were used to support the weight leading to this issue.

Again thanks for the advice.

The water is sitting at the far end. I couldn’t lift the gutter off the bracket. It seems like the gutter is fixed down by the edge of the roof. I attached a photo to show it. 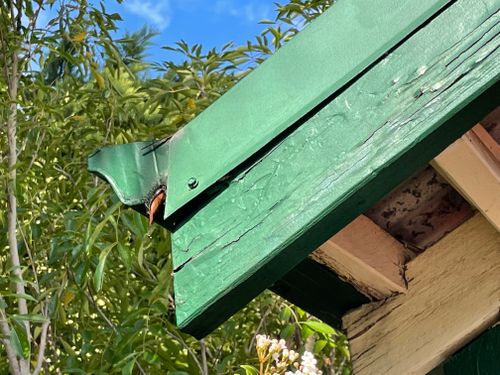 There’s a hole at the far end where water is pooling (but always get stuck by leaves) probably made intentionally by the previous owner or because of all the water pooling there. If I patched up the hole the water will have nowhere to run.

Does it look like I need to remove the roof edge before I could remove the gutter?

After seeing this additional image of your beam, I'd advise doing a bit more investigative work on the structure. If you're going to fix the guttering issue, it'd be worth finding out if there is any rot in your beams. I've circled some areas of concern. This could be just the paint degrading, but I suspect these are potential areas where the timber is rotting. There's no point fixing all the guttering up if it needs to come back off to fix beams. 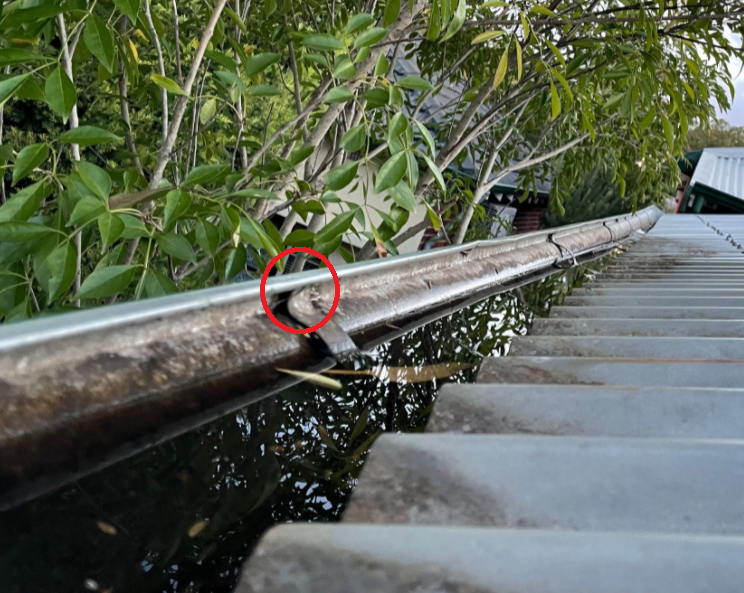 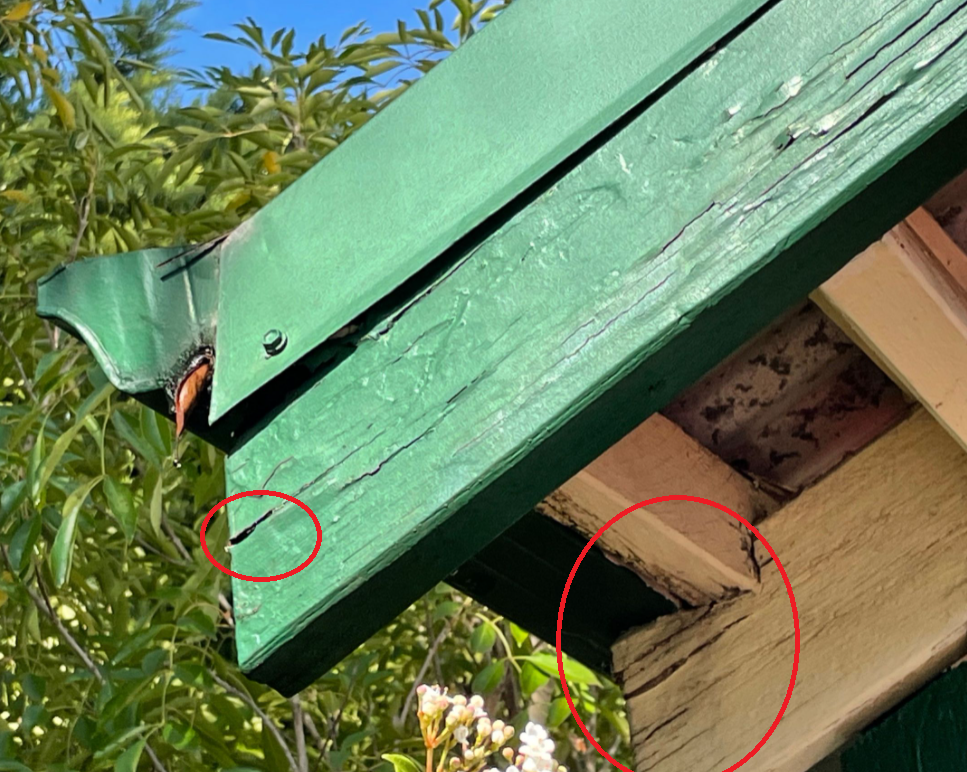 @eeWith such a large amount of water laying in the gutter it appears that your downpipe, or gutter nozzle is blocked.  This seems to be the root cause of all the damage to the framing timber.  The rust holes in the gutter are quite likely due to corrosion where the brackets are in contact with the gutter. Firstly, someone needs to climb a ladder and clear away debris inside the gutter where the nozzle feeds into the downpipe. Once that is clear the gutter should at least partially drain.

NB: Any remaining water laying in the gutter will give you a visual indication of where the low points are and you can mark them on the adjacent timber for later reference.

If the gutter still refuses to drain after debris is removed, try clearing the downpipe by flushing it with a garden hose poked down the pipe for a short distance. If you remove the snap fitting from the end of the hose you may be able work it down the inside of the pipe in case of a stubborn blockage.
Please try my suggestions first and let us know what happens. Once drainage has been restored you can take things further.

PS: It is not uncommon for things to land on the roof like tennis balls etc which end up blocking the gutter.  Gutter guard is a great preventative against foreign objects and leaves entering the gutter. (Something to think about once your problem is sorted)