I am about to start on a massive gazebo project that I will mostly be doing alone and am well aware that it will take me 2-3 years to complete, at least. 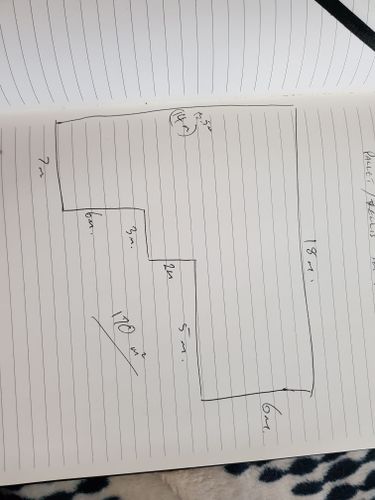 (The shade house would be at the top right of this diagram.  The residence is where the 170 is located).

The plan is to use 100mm x 3m treated pine logs for uprights.  I am yet to decide on the "cealing" cross members, but probably something around 6"x2" treated timber.

The photos below show the work area.  The first one is looking toward the house from the back of the garden.  The gazebo area is roughly where the current canopies are situated and will extend over the shade house located on the right.  Once the structure is built and the corner covered, the existing shade house will be removed and the existing garden area underneath will remain untouched (photos of this are attached). 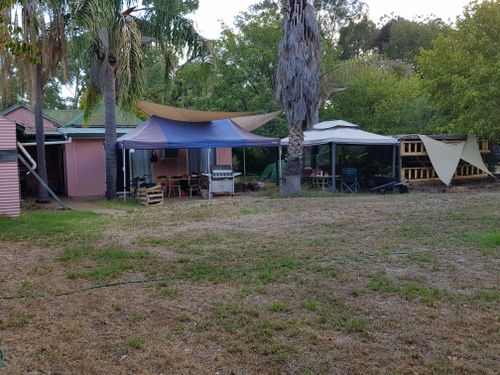 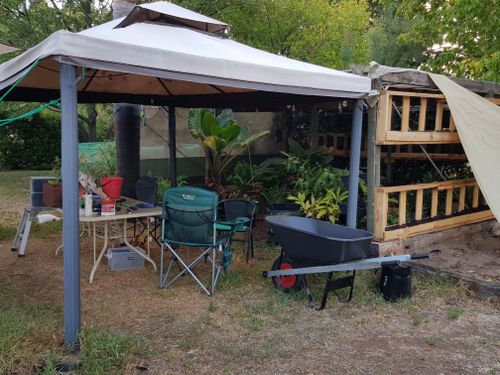 The shot below is the existing shade house.  Much of the timber is rotten as it has stood for about a thousand years.  However, I will get another year or two out of it before it needs to be demolished.

The planted area below is a mix of plants.  There was a fish pond at the back, but I have filled it in and am growing herbs. 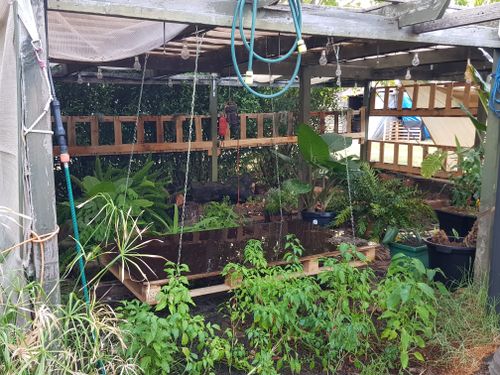 The pink wall on the right is the end of the house extension.  The gazebo will end paralel to this wall and extend across to the hedge on the right.  It will then go all the way along the hedge to the shade house in the middle of the photo. 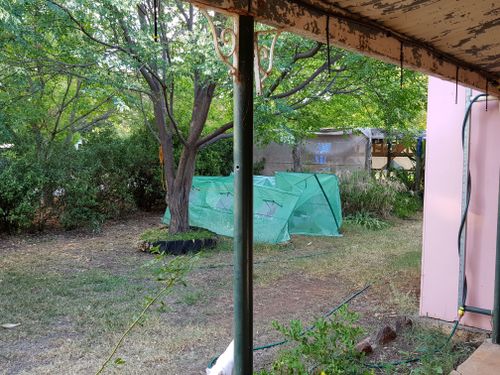 Some of the area to be covered is concrete, some is brigh and some is grass....life is an adventure in my yard. 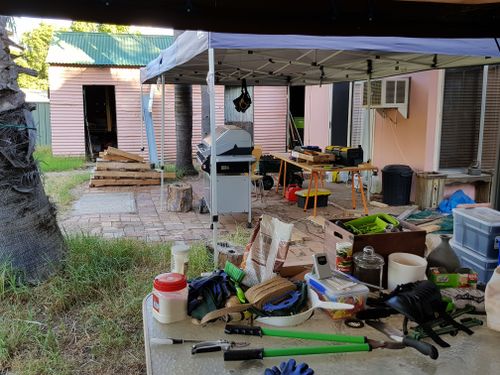 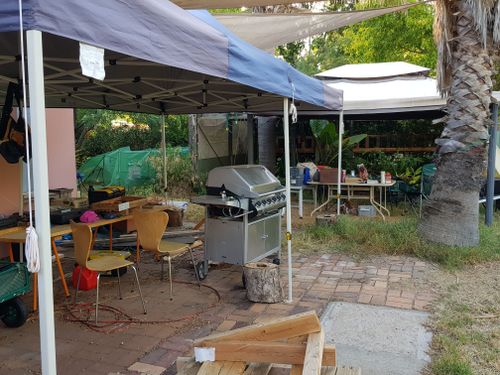 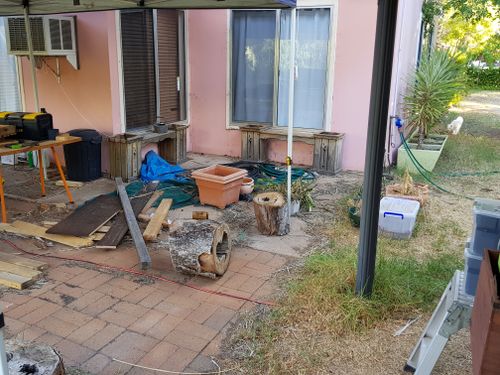 The structure will be constructed as modules rather than trying to complete in one move.  As each module is completed, it will have vines such as grape, passionfruit, etc grown over it so that it will provide shady leaves in the summer and plenty of sunlight during the winter.

I will be building around the existing trees so that they provide shade, but also remain an integral part of the landscape.

I am yet to measure up properly and put pen to paper.  I am just waiting for the weather to cool off a little and to get an off-sider to help me measure.  I am not completely certain that everything here is as square as it should be.

I am open to suggestions as I will be building it my my self for the most part and anything that makes the job easier is a good idea.

Thanks for sharing your project. It sounds very exciting. I trust you will receive helpful advice and inspiration for this project and many others in future from our community members. Please post whenever you need a hand, and we particularly look forward to watching your monster gazebo take shape.

8.9.
There would be quite a few viewers that would be interested in large outdoor, Pergolas, Open sheds and the like heres my simple solution & contribution..for starters 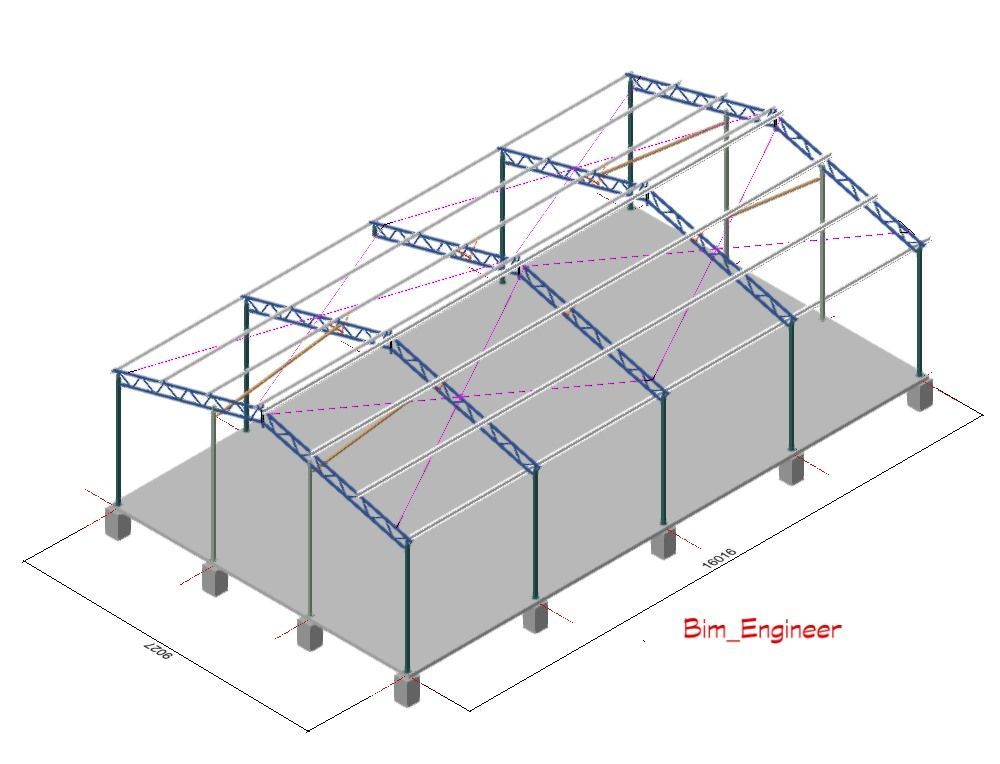 The gazebo won't be covered, it will only be a frame and I will have vines providing shade.  Some sections may have a wide mesh to assist the vines, but other than that, it won't be covered.

I live in Geurie, right in town, so bush fires aren't a significant problem and if a bush fire does reach me, then I have much bigger problems than the gazebo.

This is closer to what I am looking at.

Think of a frame like this, over a much larger area. 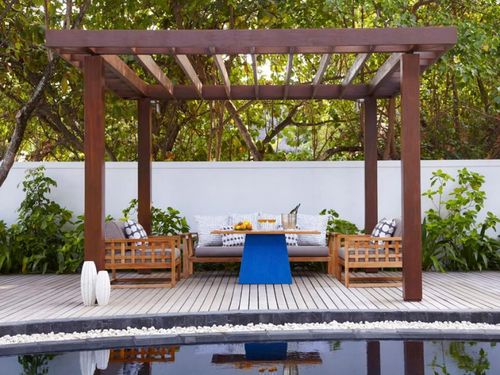 The gazebo won't be used to house cars or anythinhg, it is just for a nice place to sit in the shade when it gets too hot.

Just wondering how this project is progressing? It would be great to get an update.

Do let us know if you need a hand, too.

Not a lot has been happening.  Super hot out this way lately.

To some degree, I am still working on my methodology as I am doing this pretty much solo and I really don't want to have to double up on work because I got it wrong the first time around.  I am also working to a pretty tight budget, so I am buying materials as I can and storing it all until I am ready to strike a blow.

I promise, not a list of excuses to validate procrastination.

Is there any kind of free software available that I can use to plan the construction. Specifically, a simple grid where I can plan posts and rails, etc. A costing calculator as well would be good.

I looked online and there were a stack, but without downloading each of them and testing them (and risk introducing computer viruses), I have no way of knowing what would be of any use.

Any suggestions would be appreciated.

In other discussions on this topic on Workshop previously, community members have recommended sketchup.com and buildsomething.com.

Let us know how you go.

Nice to see hardware manufacturer kreg supporting sketchup
Hmmm.Judging from the lack of posts nobody seems interested in modelling &  Building Bird Feeders
While the average battler & punter is probably more interest in trying to make sense out of high House building prices and how to DIY

Buildsomething does look promising. Thanks for that. I like how the projects are rated by users.