“I’m in the workshop more than my house,” says Bunnings Workshop member @JoeAzza.

Sharing his home with his grandson made Joe realise how much time he spends outside it. “Every time my daughter calls and asks my grandson what I’m doing, he always says I’m in the workshop.”

Now aged 67, Joe’s interest in D.I.Y. started “from as early as 6 or 7”. “I used to help my father build anything from a simple rabbit hutch to a bungalow for the family.” 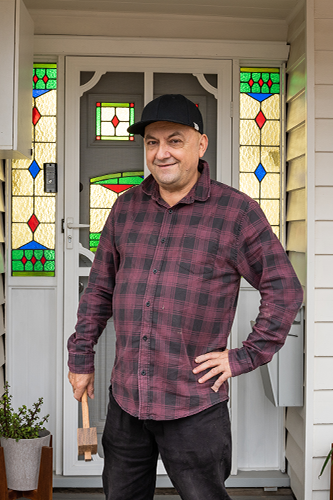 “I like making things, especially seeing the final outcome of what I made. Whether it’s good or not, I know I made it.”

When a newly married Joe purchased his first home, he couldn’t afford to pay tradespeople so decided to have a go himself. From laying pavers to building a bluestone fence, he tried anything. “YouTube wasn’t available. I learned from my mistakes and asked questions.”

It’s part of the reason he is happy to have found the Bunnings Workshop community. “Everyone is so helpful. You can always rely on someone to answer any questions you have.”

Later in life and now single again, Joe bought a weatherboard house in Melbourne’s western suburbs. “That’s when the real work started.” Previously owned by a carpet layer, Joe recalls the bedrooms and living area being covered with carpet on every wall. “One of my brothers-in-law said to leave it as it is, but one night I decided to see what was under the carpet. I’m still going today with work around the house.”

Joe’s sisters both married men named Joe – Joe B and Joe C. His brothers-in-law come around every Sunday morning for a coffee and yarn about life and “ideas on how to fix things around the house.” “I have a list of things to do. It’s never ending.”

The age-old advice that resonates with many in our community “measure twice, cut once” is what his handyman brother-in-law Joe B tells him all the time. “I wish I would listen to him. I don’t always get it right.”

With a background as a fitter and turner, then maintenance manager and administrator, Joe’s D.I.Y. skills have been largely “self-taught with the help of YouTube”.

After retiring, he decided to build a new workbench and from there “caught the woodwork bug”. Since then, he hasn’t stopped doing small builds for family and friends and getting caught up in projects around the house such as repairing the leadlight in one of his bedroom windows.

When he’s not in his workshop, Joe enjoys caring for his garden full of succulents, birdwatching, photography and watching YouTube videos. He can’t get enough of videos about the Mars landing. “I can bore people to death when I talk about it.”

He’s also watching videos on how to use a Japanese pull saw after having “a fight” with one that left a deep cut in his index finger. “The saw won.”

“I wasn’t very happy with myself. I am usually very careful with power tools. I didn’t think a hand tool could do so much damage. All I can say is be careful using any sharp tools.” 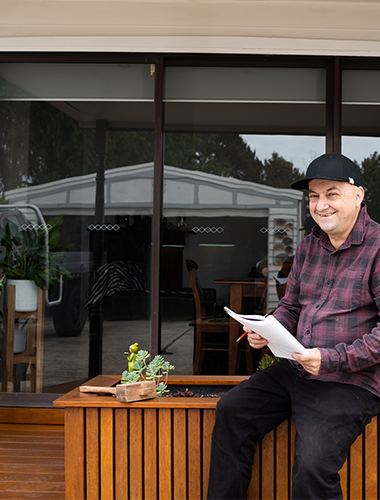 Joe is most proud of his back decking with planter boxes.Joe lives “just down the road” from Melbourne’s first Bunnings store in Sunshine. Whenever he’s there, he’ll make a beeline for the timber and tool aisle.

Just don’t ask him to pick a favourite tool. “It’s like asking me ‘who is your favourite child?’” he says. If he had to pick, he would narrow it down to “my Makita 18-volt power tools, my homemade router table, and my multifunction table.”

After discovering the Bunnings Workshop community when he heard our resident D.I.Y. expert Mitchell on the radio, Joe has shared many fantastic projects including a platter board, display shelves, planter stands and his clever lockdown-inspired parcel delivery box.

He’s especially proud of his back decking with inbuilt planter boxes and a “campaign mirror”.

“It’s a replica shaving mirror from the first World War, or earlier wars. Campaign is a type of portable furniture used by field officers.”

In the coming months, he plans on painting the second bedroom, installing carpet or floating floorboards, renovating his bathroom and replacing the front verandah decking, so we’ll be seeing plenty more of his projects in the Bunnings Workshop community.

Joe is happy to see younger generations getting into D.I.Y. For beginners, his advice is “don’t be afraid to try”. His father always used to say: “Your best is sometimes better than someone else doing the job for you.”

“I believe in having a go at doing as much as possible,” says Joe. “If it goes wrong, re-do it. You will get better. It just takes time.”

Many thanks for sharing your inspirational story, @JoeAzza. I love your give it a go attitude, as I think this is a hurdle that many newcomers to D.I.Y. can struggle with. Once you get over the initial fear of attempting a project, there's nothing that can hold you back. If it wasn't for the many failures I've had along the way with projects, I would be nowhere near as practised as I am now.

Thanks again for sharing your story and your wonderful projects with us @JoeAzza. It's wonderful to have you as part of the Bunnings Workshop community.

Really looking forward to seeing what you share with us next.

How to choose plants for your garden