How to remove mould in carpet underlay?

How to remove mould in carpet underlay?

Renting - Moisture from bathroom damaged bedroom floor - been this way for a few years, but this year the water didn't evaporate as much, as the air was too humid - so got water accumulation and mould, rotten timber base of carpet

Now moisture source removed, now need to fix up the mouldy moist carpet and Underlay and timber base underneath- underlay seems most problematic as when I try to wash it, it starts to fall to pieces - real estate agent planning to replace flooring in entire room- it is a bit expensive - is it avoidable?

Interested in tips about mould removal ,or if you think reflooring the entire room is also the way to go. 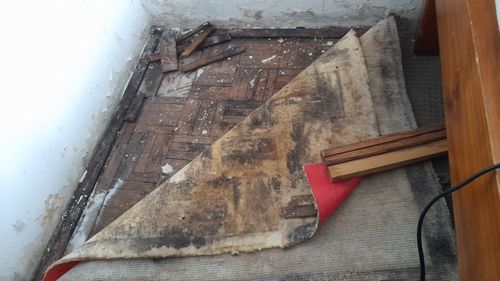 If the damage to the floor is only in that particular area, I would recommend an attempt to repair the damaged wall and floor. But before attempting any repair, I suggest speaking to your landlord or property manager and informing them of the damage. I believe it is important to find the source of the moisture coming into the house, otherwise, the same thing will happen again even if you have this area repaired.

Let me call on our experienced members @TedBear, @Chaks_DIY and @Adam_W for their recommendations.

If you have any other questions we can help with, please let us know.

Thank you for your reply. I have already informed the landlord. They are probably not aware of the extent of the damage - I only saw the extent recently, when peeling more of the carpet - and are keen on replacing flooring in the entire room. Any information how to repair only the corner would be very helpful. Look forward to the replies from the experienced people whom you have called. Thank you!

Also, in this room there were cardboard boxes near a leaking window, and they caught mold. I removed them and steamed the carpet as soon as I noticed. Window has been sealed with silicone on the outside, where it is attached to the brick wall. Hopefully that will hold. Is there a way to do a test to see whether any mould is still present in air or in the carpet?

At this point, the best course of action is to follow up with your property manager regarding their next steps to fix the issue. Mould in materials such as carpet underlay is not something that typically can be fixed, and it needs to be replaced. If they want to replace the flooring, that sounds like a fantastic solution. Given that it's not an expense you'll have to pay, I wouldn't be overly concerned about it. Resolving the issue is just as much about your health and quality of living as it is about preventing more damage to the landlord's property.

There are no tests I am aware of that you could do yourself to determine if more mould spores are present in the room. As a rule of thumb, unless a mould-removing specialist has professionally cleaned the room, you can assume that mould spores remain.

Thank you for your reply.

The agent plans just on getting a new flooring, nothing about mould removal specialist.

In my repair request form I requested mould removal and a reflooring, but got a note about planned reflooring and a repainting of the wall.

In their attempt at reflooring, the flooring company, who came to do a quote, at first wanted to just replace timber base in corner, underlay in corner, and leave the carpet. When I said that the carpet was exposed to mould they said that it doesn't look mouldy, it only looks a bit brown where it touches the decaying timber at the perimeter. It is true, the carpet itself doesn't have visible mould (it'd be hard to see on a carpet in the first place, and I also did steam vacuuming on it, which may have helped), and it is in one piece (I.e. it didn't start to fall apart), but if they wish to not replace the carpet, then surely they need to hire a mould removal specialist...? What would you recommend- complete carpet replacement or leave the carpet and attempt to treat the mould in it (potentially with a mould removal specialist)?

Also when replacing timber base, there is probably some mould under it  on the cement. Flooring company doesn't do anything about it. Do I need to ask the agent to schedule a mould removal specialist on the same day as reflooring? Or perhaps treat cement with an anti mould spray of some sort myself when they're reflooring, and that's it?

Thank you for your help.

Thank you very much for that update. You'll need to do a local search for a mould removal specialist in your area. Generally, they will track down the source of the mould and inform you of what you need to do to repair it. Removing mould from an infested carpet is a bit tricky as it is difficult to tell if you've removed all of the mould spores in it. If even just a handful is left they can easily propagate in the carpet without your knowledge. I recommend changing that part of the carpet if possible to prevent further mould growth.

The other recommendation I can suggest is to clean the area as best you can with mould cleaning agents. Once it has been cleaned and has fully dried off, I suggest sealing the area with Crommelin 2L Dampstop. Dampstop is a 2 part water-based epoxy used as a moisture vapour barrier. When applied to a sound surface, Dampstop will help prevent the escape of rising or lateral dampness from walls or floors. It will form a barrier, but it will not stop the accumulation of moisture and dampness underneath the floor.

The source of dampness must be located and addressed first. Fixing the floor now will only cover the dampness for a little while and eventually, you'll start to get the same type of damage happening again.

I propose speaking to your property manager and postponing the floor repair and addressing the dampness and mould issue first.

A tradesperson came (arranged via agent) and sent a quote for removal of old carpet and application of fungicide and waste disposal. They say they sent it to me by mistake, and emailed it to the agent as well.

Old carpet removal, including underlay, and parts of timber base that are affected by mould --- I can do myself?? The tradesperson mentions hazmat suit, mask, gloves etc, I have an n95 mask & afterwards can put my clothes in laundry & have a shower? It is not that hard to remove. Asked flooring company, they say not to do it, I am yet to find out why.

Waste disposal - Randwick household cleanup can pickup carpets they say? And it is around 7 times cheaper than his quote?

Fungicide - a tenant union say it's bad in a bedroom - would you agree? What are the options?

This job needs to be left to the property manager and professionals to complete. As a tenant, your only job is to ensure that your health and safety are maintained during the process and that any remedies lead to a habitable property. I would strongly advise that you do not partake in the process, both from a health and safety standpoint and one of liability.

Regarding the use of fungicides in a bedroom, I'd encourage you to do further research to establish whether you find their use acceptable. Fungicides and biocides can be a health hazard and must be used in accordance with stringent rules and regulations. There are specific fungicides developed for indoor use, and it would be worth enquiring with the tradesperson about the fungicide they'll use. If you have any concerns, you can contact the product manufacturer to discuss them.

As someone who has been renting for twenty years and plays a very active role in maintaining the properties I've rented, I appreciate that you want to assist in fixing this issue. However, there are times when it's best left to the professionals that the property manager has engaged. I strongly feel this is one of those cases.

What do you mean by liability-

- if I remove some parts of old flooring incorrectly, the flooring company will see it when installing the new floor, and will fix it before the install

- what other kind of liability could be there?

- there is exposure to mould, but I had been in some contact with it for two months before finally deciding to set up sleeping area for me in another room, anyway - and I have some  PPE

I am just checking. Meanwhile I am trying to get more quotes from various mould removal companies, many aren't taking new customers in NSW for weeks now..