For my wife's Bday, I decided to get the back area around the pool finished. It's only been 3 years.

First time building a Deck, I think this one turned out alright. 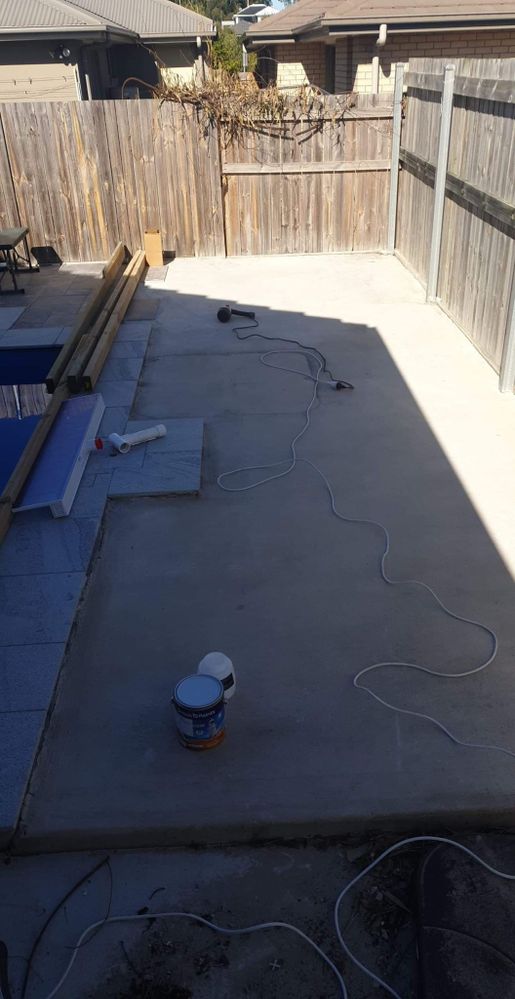 Above is the area in perticular. Its a concrete slab that I originally planned to just tile over but due to the poor leveling of the concrete its dramatically uneven. You cant really tell but that top right corner is about 20cm lower then the tiles around the pool. I had been using a french patten tiles to hide the inperfection, but this drop was way too dramatic to be able to hide with tiles. I could fill it in and build it up but that would also be suspecible to movement and not being level either, so I decided to hide it all with a deck. 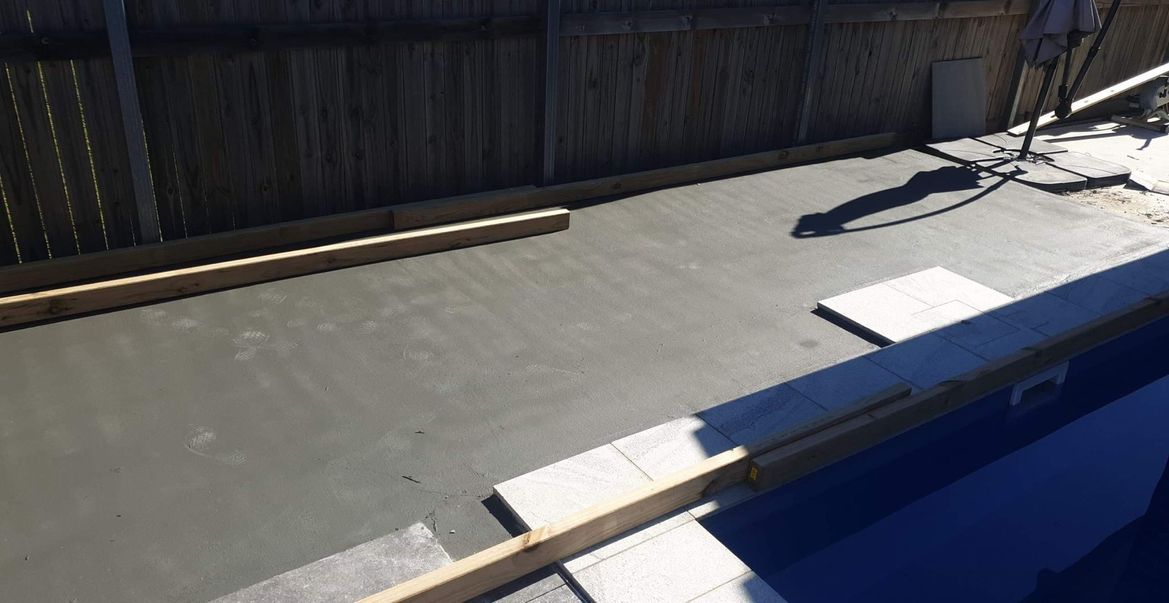 First step try to hide the fact that I gave up on the tiles and just left the concrete bare. The Concrete was very white and had alot of glare so I decided to pick up a Ozito Power spray gun and some dark grey paint, it did the job perfectly, had it done in about 15mins. Next step, the framework. 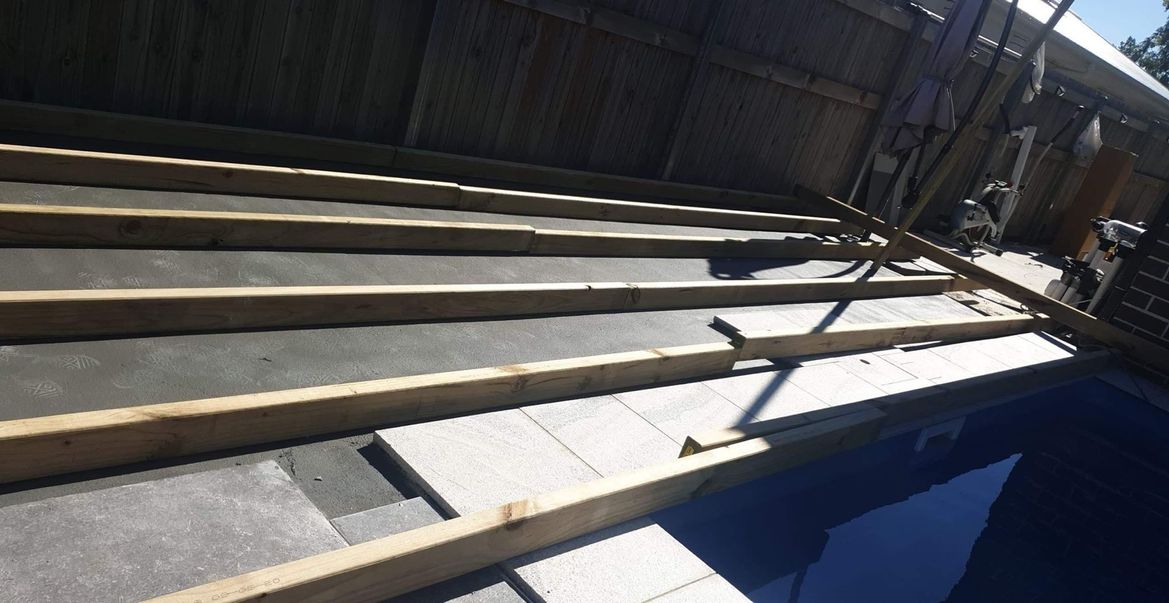 Here I started by just laying it out trying to figure our if I have enough for what I've got planned. You can see how the beams are a few cm out by just laying them on the concrete. it was really out of whack. I also decided to over hang the pool slightly and that gave me a crazy idea. (more on that later) 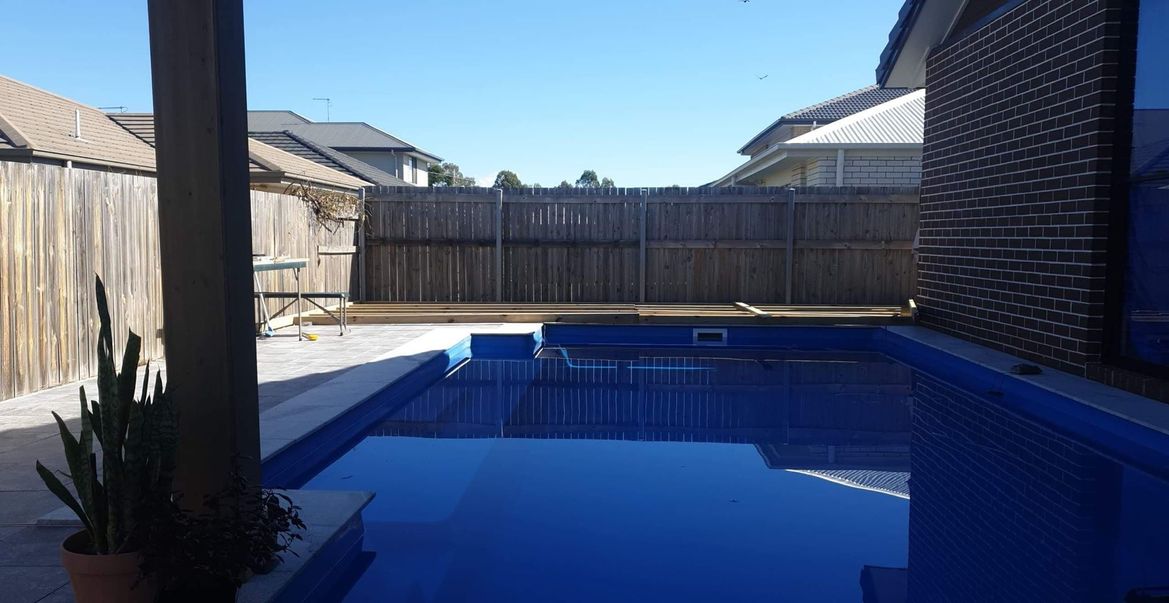 The frame is coming together nicely, approx 1000 nails and a bunch of blisters later and its all one peice. You can see here that the back left side is so uneven and drops away. I need to lift it up a smidge to make it all nice and flat. When I say smidge I mean about a foot.

I leved it up by creating 'legs' at every place the wood intersected. The 'legs' are glued to the frame with liquid nails and I got a rubber layer between the treated pine legs and the painted concrete. I also added 2 bolts into the metal fence posts to stop any movenent over time. When I was done the frame was solid, no creaks or movement. Just flat and square. perfect. 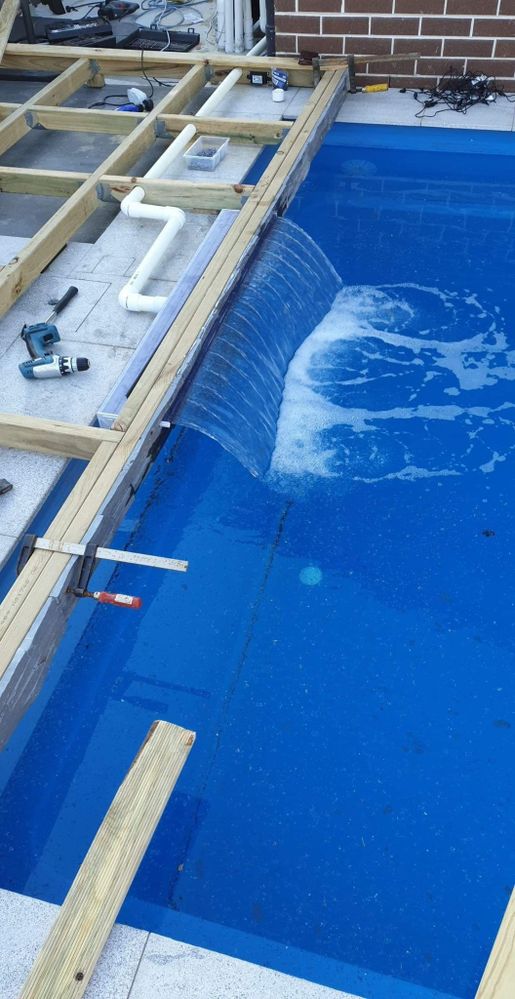 So here's that crazy Idea I had. In all my genius, building a deck for the first time wasn't hard enough so I decided to try my hand at plumbing and added a very fancy waterfall. I bought the fountain peice and had to plumb it all in. To my suprise it just worked. Its wierd how doing ample reaserch pays off. I also added a substantial elecrtical system. (More on that later). 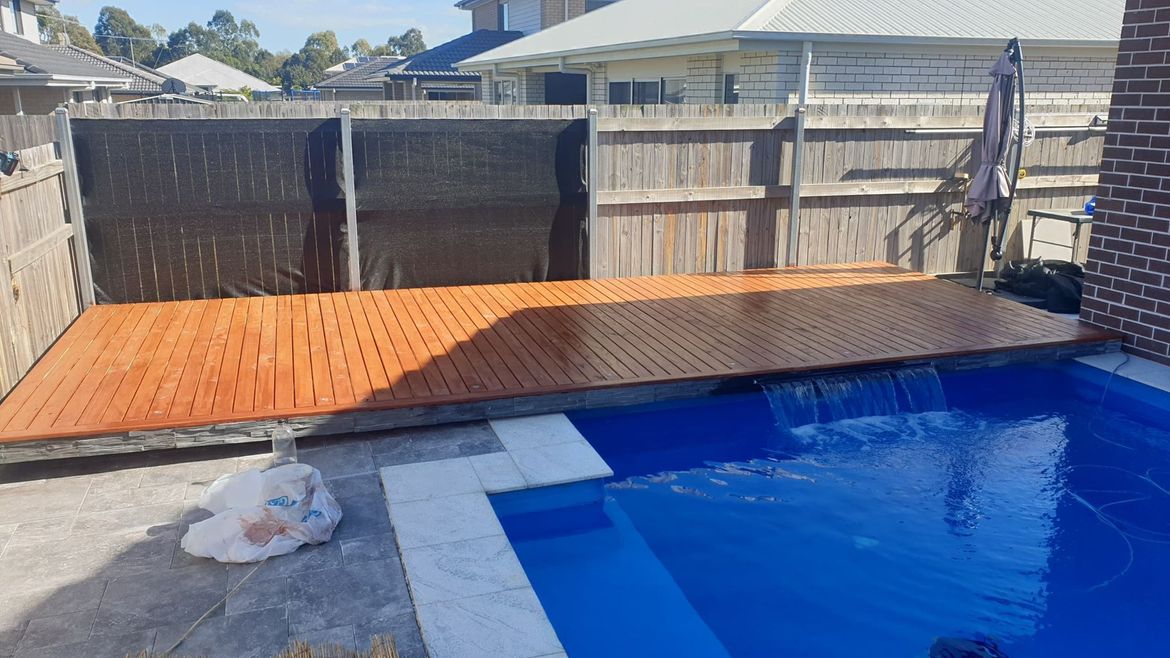 So here it is after the deck is done. I added stackstone on the front edge to add a little class, I also had to cut though the stone with a angle grinder. Luckly for me the stack stone was 100mm high and broken into 4 layers of 25mm stone. The spout of the waterfall just happened to sit between 50mm and 75mm tall so all I had to do was remove the 2nd of the 4 rows. was pretty simple really. I also treated the pine deck with stain to match the colours of the house. Also (not showen) I used the Camo deck srcew system so there's about 800 screws and not 1 that sticks out or can even be seen. 100% recommend the extra cost to make it look nice and clean. 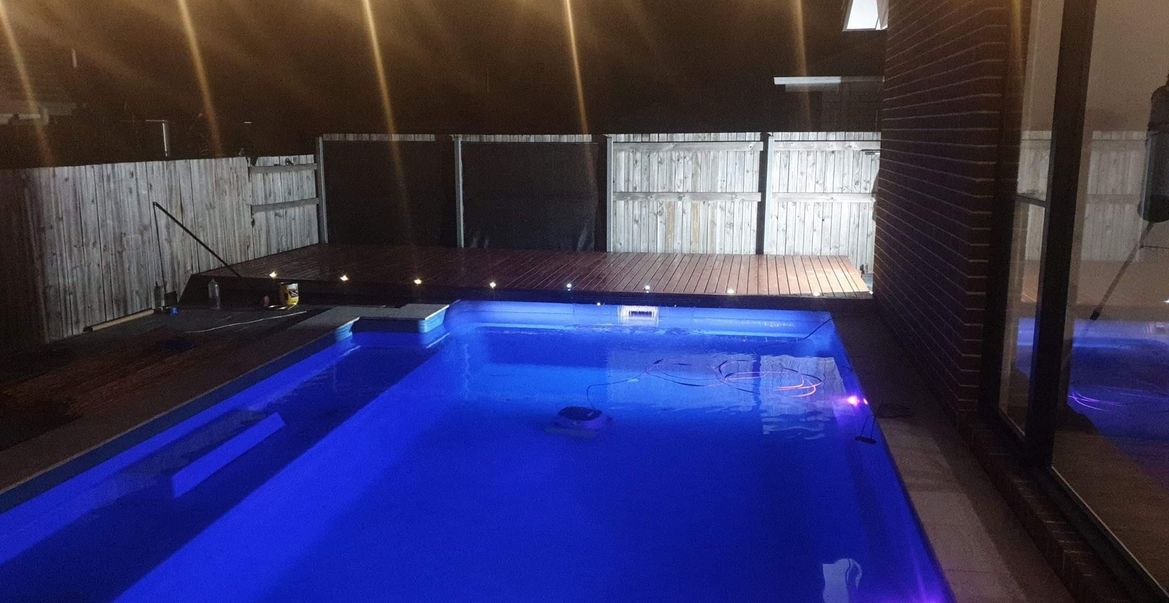 This pic gives you an idea of what it looks like at night.

I added 8 deck lights, an LED set underneath behind the waterfall and a flood light for when we may need light on the deck for whatever reason. All these and the internal pool lights are all plugged into an Arlec Grid connect 4 way power board. That way we can controll all the lights from our smart phones. All the cabling has been secured with stapels, this way none of the cables will hang down, become loose or interfear with the pool cleaning equipment. Super cool stuff. 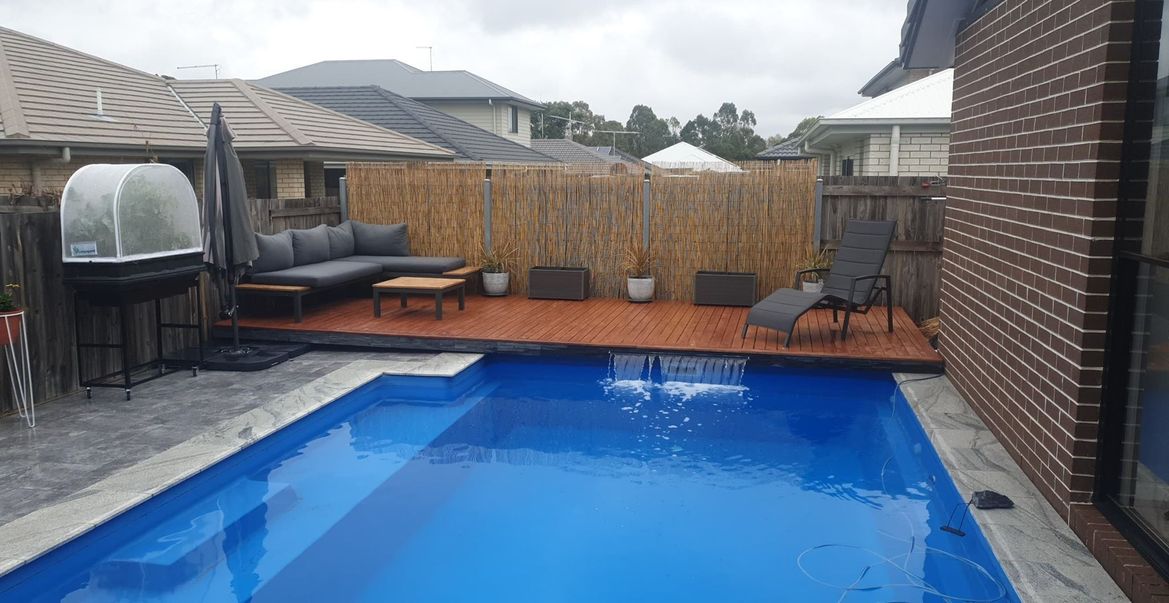 Here it is all done, ready to enjoy all that summer weather... well not today but someday. In the end I added shade cloth to our fence then layered bamboo fencing over top securing it with cable ties, making it almost impossible to see through it. I will continue it right to the end (On the right) and put in a fence with a hidden gate to access the service area of our property and close off that area. You can see that the sun shade (umbrella) base is tucked under the deck. The base is about 10cm thick and if you look carfully you can see how dramatically the ground drops off to the left. Having a deck here adds much needed space in our small back yard area and also hides the shoddy concreating job. All in all im happy with the result but most importantly the wife loves it.

Wow, great job @Marty_McFly, and thanks so much for sharing plenty of photos and detail. Low-level decking projects are always challenging and we get a lot of questions about them on the site so I'm sure your handiwork will inspire and inform plenty of site visitors and members.

Let me also extend a very warm welcome to the Bunnings Workshop community. We're really looking forward to seeing what you share with us next. We have amazing members sharing helpful information, advice and inspiration on the site every day so we're sure you will fit right in. Please don't hesitate to post anytime you have something to share or need a hand with a project around the house and garden. 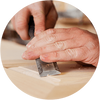 that looks awesome!  You did a great job 👍

It's great to have you join us and I'm sure Marty_McFly appreciates your comment. Let me mention @Marty_McFly so they are alerted to your kind feedback on their project. Are you looking to improve an outdoor space or your own? We'd encourage you to let us know if you need assistance or would like to share any of your projects around the house and garden, I trust you'll find loads of inspiration for them from within the community just like this amazing Low-level pool deck.

Thanks, It took alot of planning and effort. Now its in we've used it way too much for the cold weather we're having. 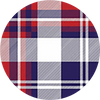 Grandma
Newbie
In response to Jason

Welcome to the Bunnings Workshop community. Thank you for joining the discussion. Let me tag @Marty_McFly so they will see beautiful comments. Do you currently have any projects lined up around the house? Please don't hesitate to post, our members are more than happy to provide you with advice and information should you need it. I recommend exploring and having a look at all the amazing D.I.Y. projects that our members have shared.

If only I had a pool