How to fill the holes and gouge in my door?

I'm so pleased that worked out for you @newfast. I couldn't bear to see your project halted at this stage after you've put in so much effort.

Keep up the great work!

its called the internet, and the marvels of cyber space then it could be the demands on Bunnings servers.

when you start mounting the parts in place, take the door off and lay it flat, the best way to do this is remove the hinge pins that way it is much easer to put the door back up and no screws to try and put back in 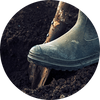 Hi Folks, I did some basic prep after work, the masomite is kind of slim n light so the wooden packers be best to go behind it.

Removed the main honey comb, vaccumed and gave another round of cleaning edges. 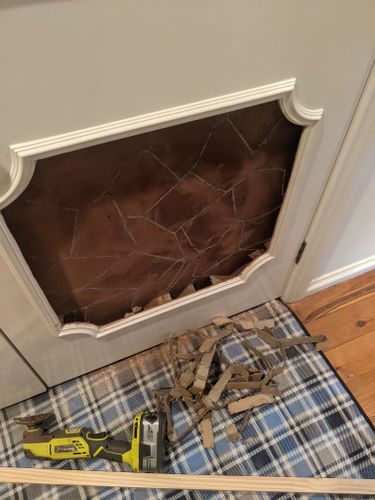 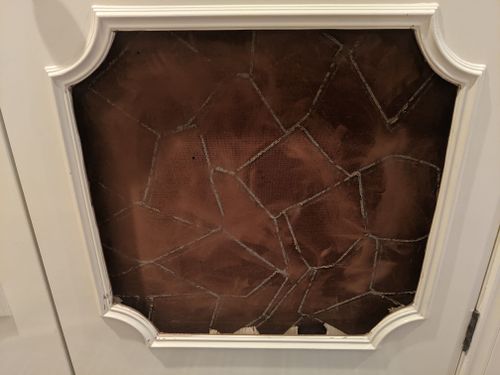 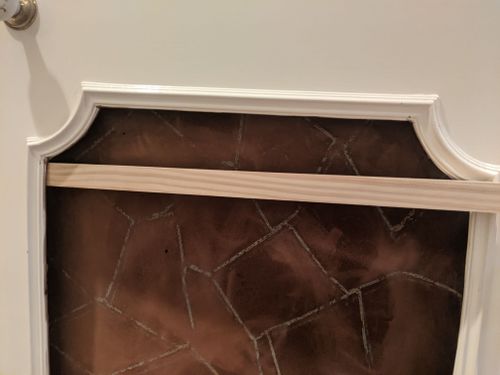 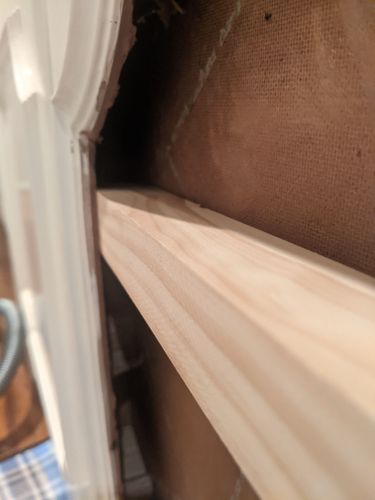 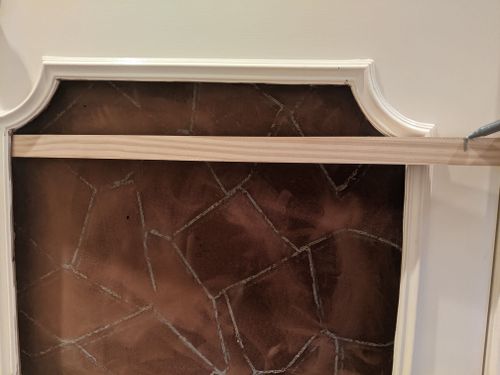 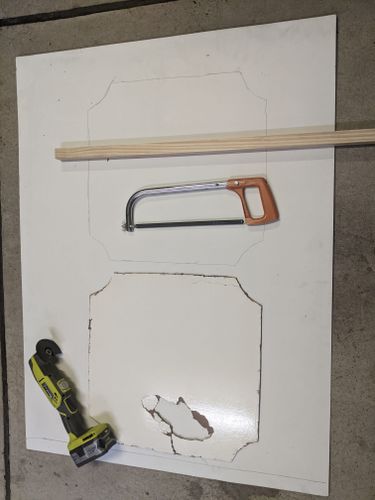 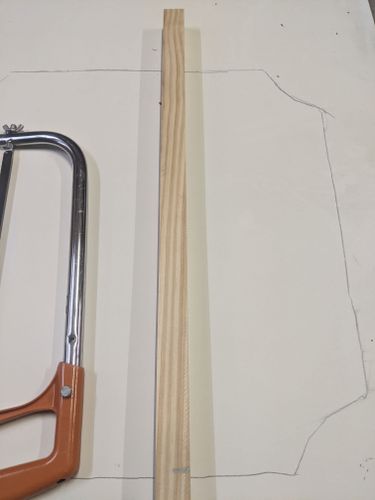 It’s just a matter of knocking the pine out of the hinge in doth cases a 75mm nail tapping up ward will remove the pins .

slip the packets in 25rmm each side or 30mm each side. the thicket the packer the harder it is to get them in. the other approach is to come in at an angle top to bottom twisting up wards. in other words bring the packer is almost vertical then rotate the packer to the horizontal. to top it off the g clamps will not fit with that material.no where for the clamp to fit

Just to add another alternative for packers...  to make it easier, given what you have, you could just use strips of Masonite as packers, now that you have plenty. The purpose is just to keep the inserted panel straight, not carry any load. This is what those thin strips of honeycomb were doing before.  Suggestion:

Cut 3 strips, the width of the gap inside the door, (between the front panel and back.  ie the width that you would have trimmed the timber packers down to). Make the lengths about 40mm longer than the hole, so 20mm can slide up inside each end of the hole.

Put glue down one edge of these strips and 20mm of each other edge's ends and slip in the gap vertically (they will slide down if horizontal), with glued edge at back.

Put 1 strip in centre & other 2 between that and the edges. Now you have 3 stiffeners.

Now cut 2 more strips  50mm wide and glue them in flat (not on edge) halfway into the vertical edges, so they protrude 25mm to form the side supports as shown in @r23on's earlier drawing.  Clamp those in until glue dries. It would be wise to also cut some shorter 50mm strips to fill in edge gaps along top and bottom edges, (but not as essential, since vertical packers will align those edges).

Now you will ready to replace the panel.

(Make sure that you make the new panel to fit before you pack the hole, so you can slide the cardboard template in and out. Cut a finger hole in the middle of that template so you can handle it easily.)

I will cut the 3 one size and 2 other size strips tomorrow.

1 question ,m:- the masonute seems flimsy when I be cutting whats the best way...put it on 2 shairs or make it stand and hold it in angle while I cut with the  saw

It's great that you've received fantastic advice from @TedBear. I suggest cutting the masonite panel on a flat surface or table to prevent it from oscillating while being cut. You can either get some clamps or have another person hold the panel to prevent it from lifting while you are cutting it.

The method I use for cutting masonite is often "score & snap", because it is, as you said, thin & flimsy. But you then need to file the edge square since it doesn't always snap off cleanly. A better method for you would be to lay it flat, score the surface with a knife, shallow first to get the line straight, then cut a bit deeper, then put it between chairs (cut-line is close to one of them), then use that groove to guide you as you saw through the board. Use the saw at an almost level angle, so that as many teeth as possible are sliding along the cut.  If you saw too vertically the teeth will grab on the thin board and break through, rather than slide through neatly. That's easier and gives a better, smoother cut.

(Of you want to try the Score & Snap method, make sure you score the back too. I'd only use that for the two strips for the edges of the hole, because their width isn't critical,  so messy edges won't matter.) 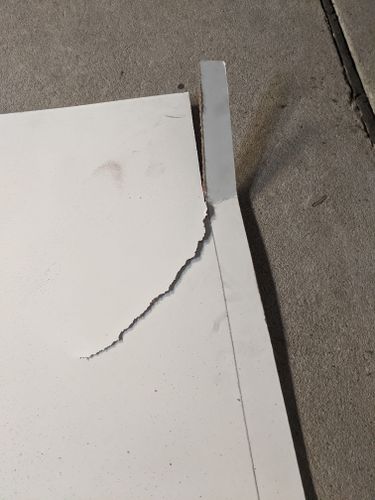 Hopefully having extra Masonite means it's an inconvenience, not a disaster.

(I have often described some of my projects as a series of repairs joined together. Welcome to the learning curve of D-I-Y.)

This DIY project was not for the faint hearted and needed more than just help from my husband! We did everything ourselves, but had a plumber sign ... 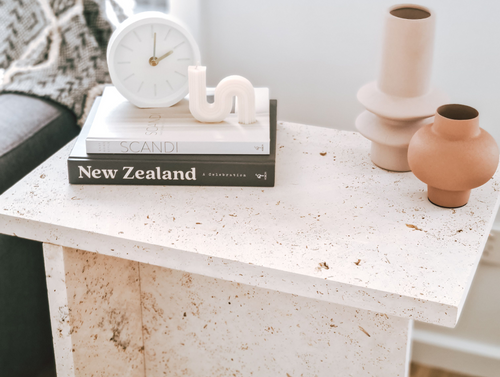 I found some cool old prints that I wanted to frame and found this cool design and thought I'd give making them a go myself. It was super easy and ine ...

I have completed this coffee table made from Tasmanian Oak for legs and rails and recycled timber for the table top, I don't what kind of timber it i ... 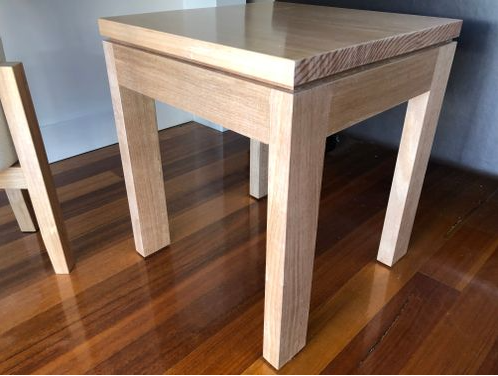