trimmed off the overhang, and it's looking pretty good 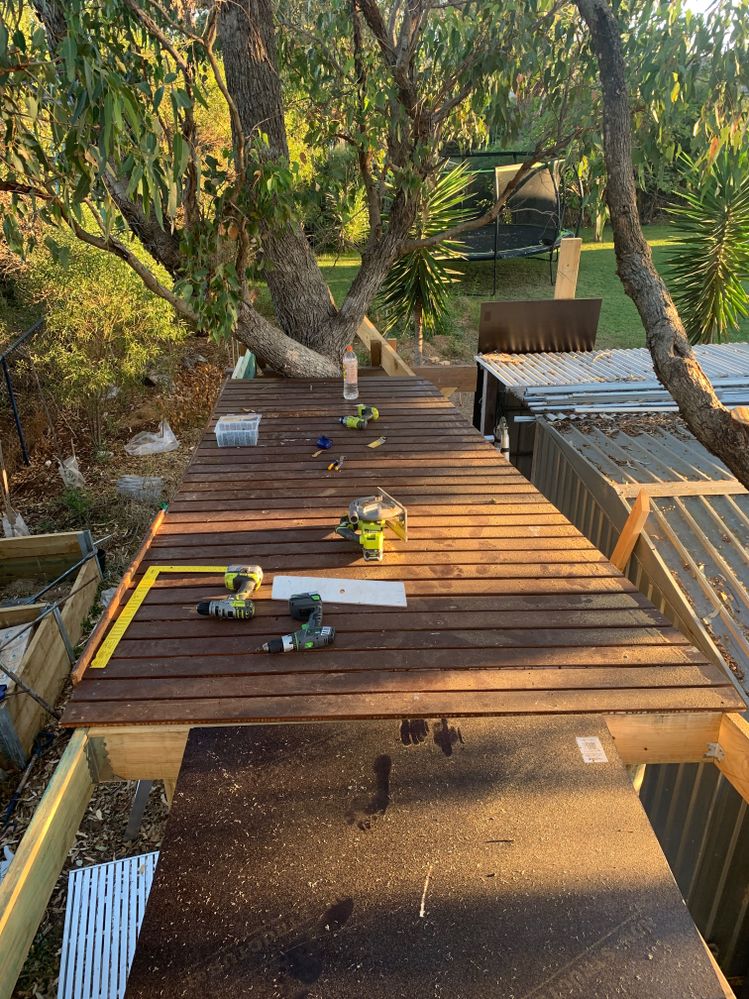 now for the (form) ply flooring to go under cubby part. 19mm film ply. A chalk line was perfect for tracing where beams were underneath ! 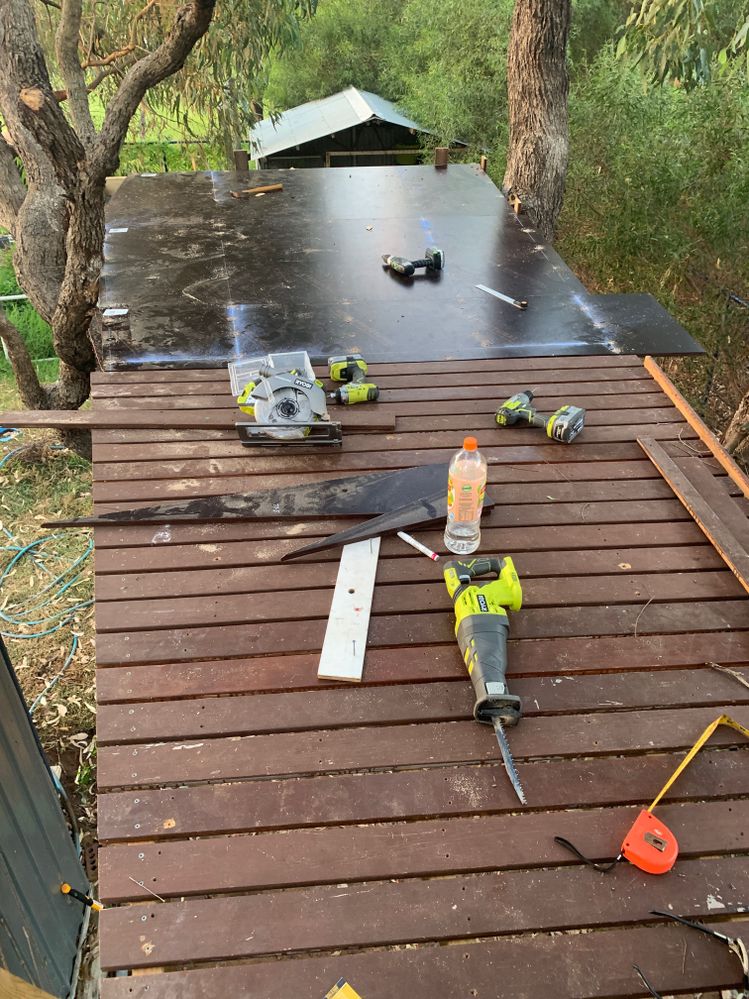 all the flooring done !

quite a behemoth from underneath ! 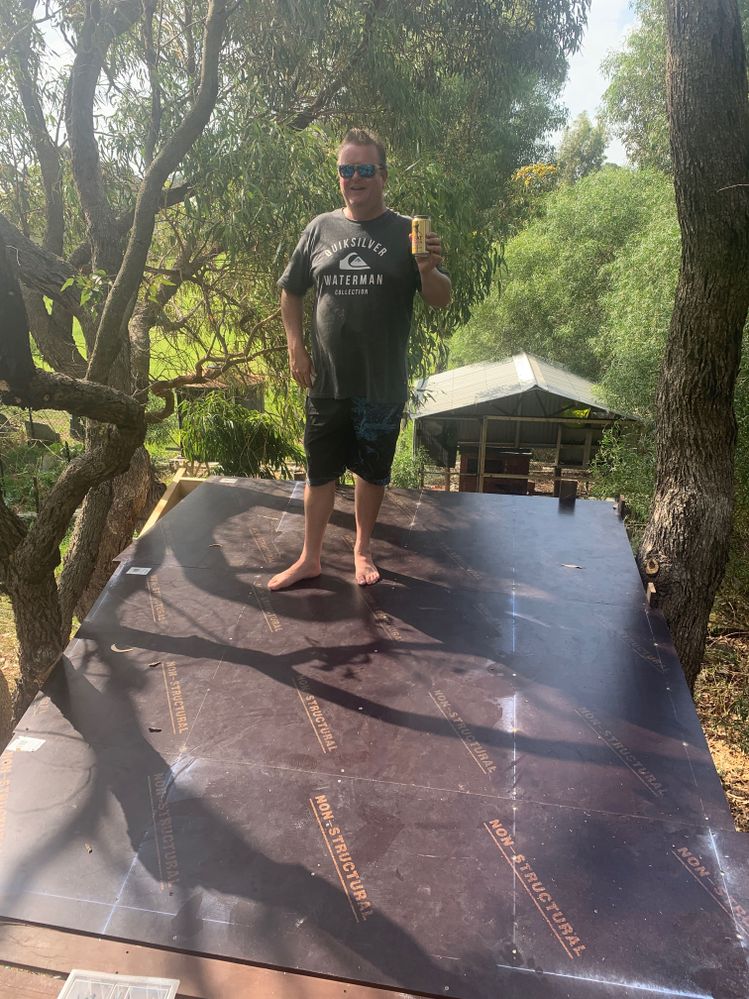 That's it for the moment folks - heading away for easter, so will get cracking on it when I return....
next is safety railing around deck, then the cubby which I plan to build out of EPS (expanded polystyrene sandwich) paneling - like coolroom paneling. it's one piece, cladded inside & out with thin steel sheet with 50mm foam sandwich - super strong and insulated. and will give me a nice inner & outer finish as well as insulation, without having to do a stud wall and then skin inside & outside. found a local place that has offcuts that should be perfect for my needs. will be cool in summer, and hopefully keep all the bugs & spiders out.
then a ships ladder to access, and maybe a secret hatch into the cubby part, firemans pole, and maybe a scramble net suspended off the side ! - also maybe a slide if I can find one the right size cheap enough

I have really enjoyed your treehouse updates and am sure that the rest of the Workshop community has too!

Have you got back into it after the Easter break?

It would be fantastic to see some more updates soon.

Thanks again for sharing this wonderful project.

Where did you get the high tensile rod from?

Thanks for joining in the discussion @Matt_C. Let me tag @Dan_M for you so he is alerted to your question about where to obtain the high tensile rods.

Welcome to the Workshop community. We're sure you'll get loads of helpful information, advice and inspiration for all your projects around the home and garden from our wonderful members. Please don't hesitate to post anytime you need a hand or have something to share. We'd love to learn more about your projects and plans.

@Dan_M I'm new to Bunnings Workshop and wondering whether you had any more treehouse news?

Re: Building a treehouse

I can already see that big smile from your child's face she is going to love this! I would love to put up a tree house but alas there are no big ones in my backyard. Looking forward to the finished product! Fantastic build!

Re: Building a treehouse

anyway, a few comments has revealed a bit of interest in the build, so I'll throw up some updated pics

I was lucky enough to score some composite panel from a local wholesaler who had some lengths of 40mm thick sandwiched foam with steel skin. they are interlocking panels used for sectional garage doors (great idea to have insulated garage roller door !- check out http://tigerbuildingsystems.com.au/  ) They had some panels that were water damaged and couldn't be sold for normal use, so I got them very cheap ! - they even cut it to length for me 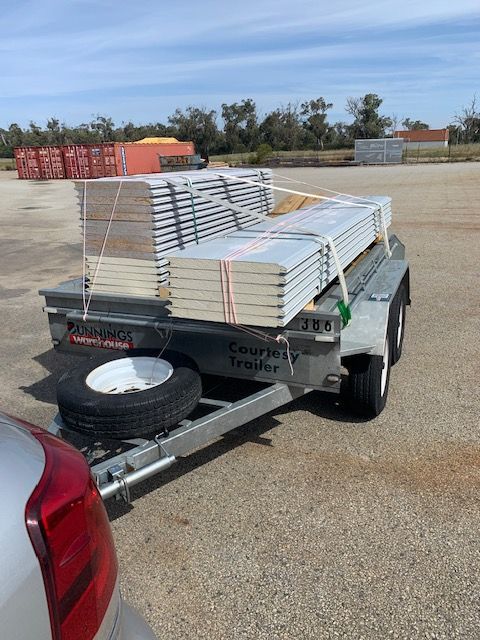 (thanks bunno's for the courtesy trailer

plan was to mount it inside some sectional 'C' Aluminium channel....which would've been perfect....except there was no 40mm channel.... so I had to get 50mmx25mm.... got from Ulrich aluminium - who also cut to size

To make 40mm panels fit into 50mm channels....took a bit of thinking; but I discovered that DIY lengths of Flyscreen panel frame are a perfect 25mmx10mm, nice and light, and pretty cheap. This would be used to 'pack' in the panel so it was snug - worked perfectly, very neat, and left no nooks for spiders/nasties to set up camp....
C-channel was screwed to base and through into beams below. composite panels were glued and riveted into channel; and very cool 90o channel joins used for corners, and also for attaching roof later on

1st was the trickiest ! - imagine trying to balance this on your own, up a ladder with a decent breeze 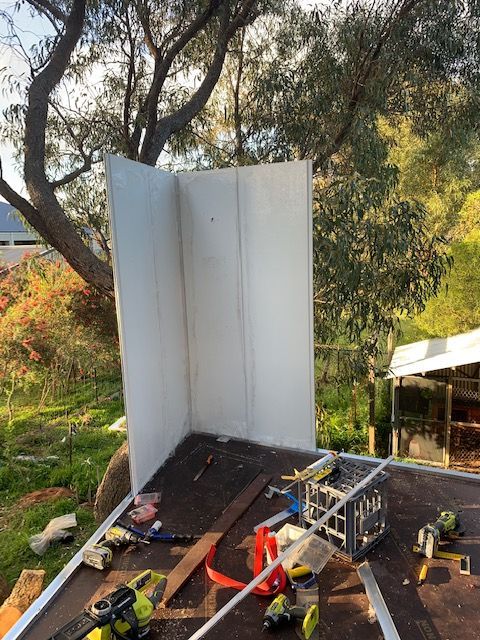 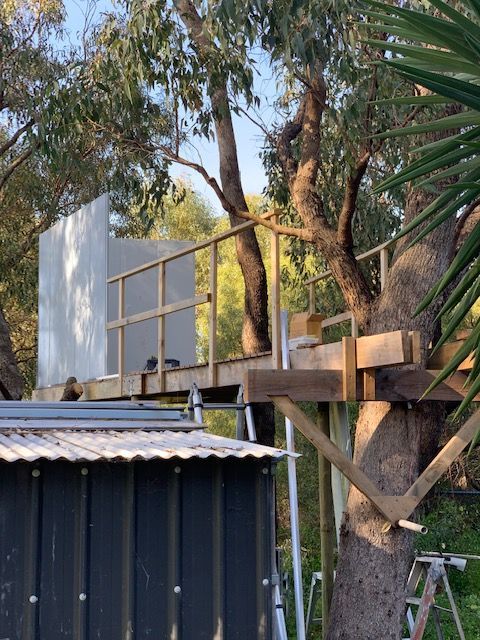 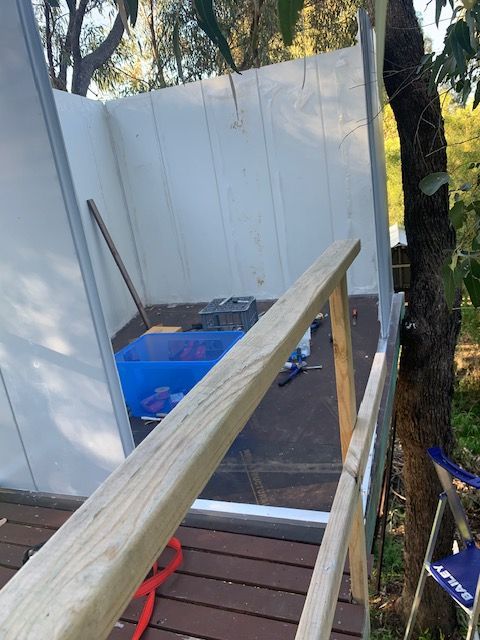 gap left for door, and then onto roof ! - closing in the final panel was tricky....but it's all done and solid as a bunker !! 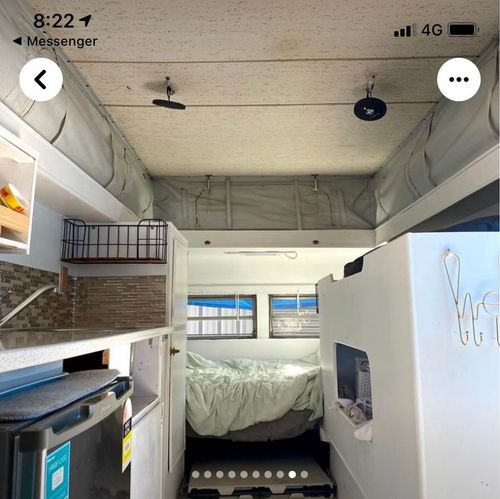 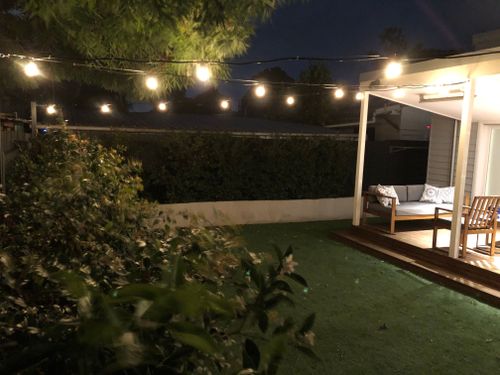