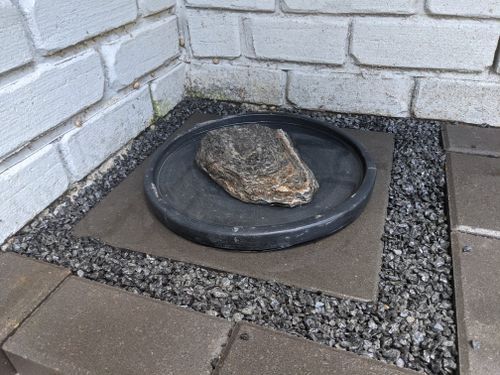 This corner in my home (directly outside my office) had a massive divet in it caused by the run off of my air conditioning unit, it's also the area where a lot of birds come into my yard for a morning and afternoon snack on the locals, so after doing some research and discovering that the water dripping out of the air con is safe to be consumed, I decided to fix this issue by creating a bird bath that refills whenever my aircon is on (which is most days).

I dug out and levelled the area, placed a small weed matt down, then some pavers sand. I then positioned the center paver where I wanted it before placing the dish and small standing rock in it. I then positioned and levelled the bricks around the edges and filled the gap around the center paver with fine stones. The result is what you see above and I couldn't be happier.

The Aircon run off drips directly into the bowl, with little spillage. The birds have taken an instant liking to it, and I've caught a few of them using the run off as a shower while on top of the rock. Heard a few Green Tree frogs there at night as well, so I know they're at least using it

What a novel idea @Remarka6le! I never seen anyone using air-con condensation so effectively. I'm sure there are plenty of members that could also give this a go. It's certainly a plus for your local fauna and removes the possibility of dampness entering the adjacent brickwork.

Well done and many thanks for sharing.