I am looking for a magnetic doorstop where I can drill one part into the door, and the other part into the brick. However I can't find one at bunnings that allows me to drill into two surfaces. It has to be magnetic to keep the door open, and it can't attach to the ground because the door clearance is too high and it'd interfere with the laundry access on the left. Can someone recommend a solution? 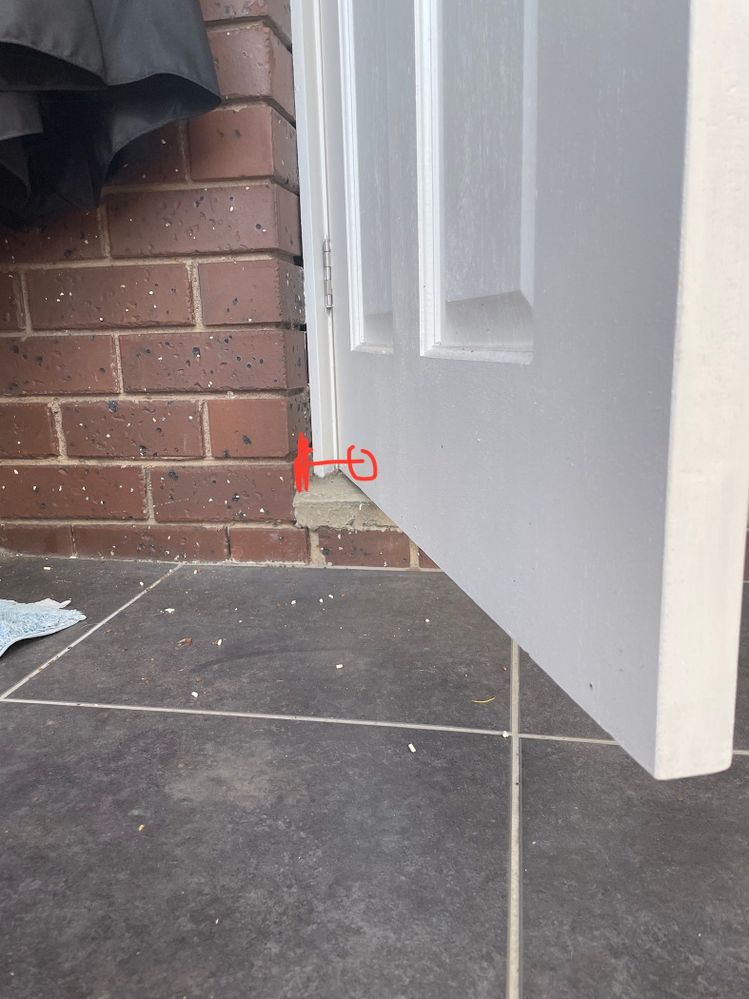 Let me tag @TedBear and @JoeAzza for their thoughts to kick off this discussion. @MitchellMc will also be happy to help when he's back on the site tomorrow.

You basically need a magnetic door stop that is less than the thickness of your doorframe and can be fixed in that area. If this Adoored 40mm Satin Chrome Roll Magnet Door Stop is small enough, it can be fixed directly into the concrete door sill (not the tiled floor). The circular metal disc can then be screwed into the door. Another option might be to fix an Adoored Satin Chrome Salute Magnetic Door Stop in the orientation shown in the image and, once again, into the concrete sill.

Most magnetic door catches allow you to drill into two surfaces. They need to be fixed to both the wall/floor and the other section on the door. Since you have limited space, you'll just need to find one that suits the limited area and/or use them slightly unconventionally. 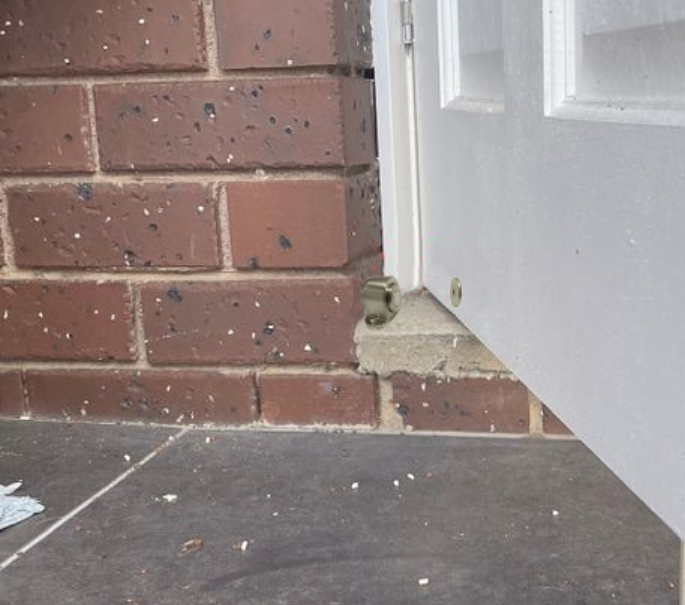 I agree with @MitchellMc 's ideas on this.

I would only add that given the short distance between the hinge and the location of the door stop, mechanical leverage will be against the magnet being able to hold the door in place, especially if it gets bumped or is subject to any wind.  If that is the case you should consider using 2 magnetic catches... is it possible to mount another at the top end of the door?

(Maybe try just one catch, as planned, and see how it goes.)

To me - you're gonna have trouble drilling the holes for this one? The drill will be at an angle - and drilling will be very close to that thin concrete edge?

Constantly hitting and un-attaching the door will add to the anchoring problems? 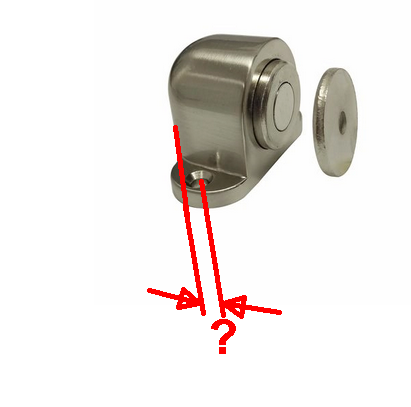 No screen door? Could you attach a humble door closer (with a 'stopping' clip) to the top of the door illustrated? Is this intended for laundry days only?

'Elevated' bracket (flattened handle?) on the bricks and a magnet on the door? 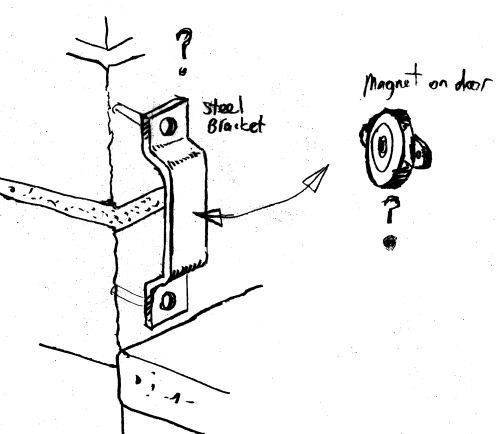 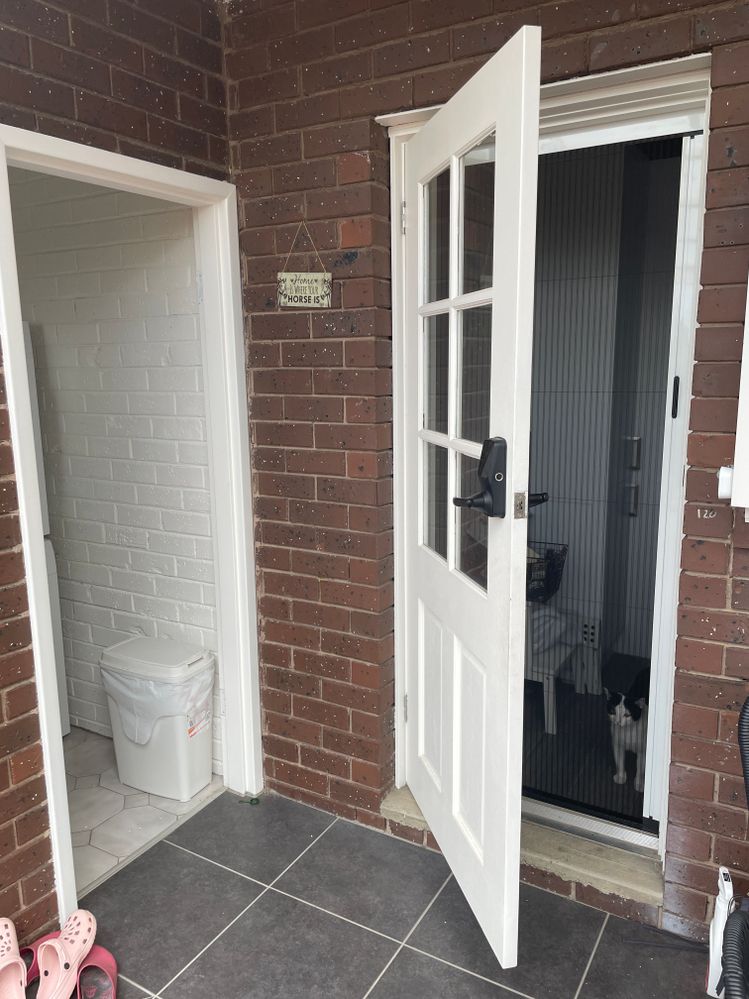 Can I ask why you need the magnetic door stop in the first place @carpedion? Does the door not stay open by itself?

If you were going to go for a door closer that requires manual operation, then I'd just suggest the much simpler option of using an Adoored Satin Chrome Hook and Eye Style Door Stop or Pinnacle 75mm Stainless Steel Cabin Hook.

Good question @MitchellMc. The door doesn't stay open by itself and we have a retractable flyscreen door which we can't allow the door to hit against. Those simpler options could work, however the clearance between the door and bricks isn't very big, so it means a simple latch might restrict how far open we can have the door.

The advantage of a magnetic option is that we can just open the door to the magnet and it will stick, whereas the simple latches have to be latched on and off (and we sometimes are constantly opening and closing the door as we have a cat that scratches at the flyscreen which he is not allowed to do). I'm thinking @Noyade  suggestion of a steel latch (in the middle of the door on the brick, and also at the bottom), and two corresponding magnets, might be a good solution. Open to other suggestions but don't want to take up too much of your time/resources!

The simple hooks were only a suggestion if you were going to look at an automatic closer, which would have been more work to un-latch every time @carpedion. The more you move the simple latch fixture on the door towards the handle side, the wider the door can open. So, it shouldn't obstruct its opening.

You can stop the door from closing by itself if that is the issue. Simply remove the pin out of the hinge and place it on a concrete floor. Tap it in the middle with a hammer to bend it slightly. Replace it into the hinge. You'll need to tap it with the hammer to get it in. You should find there is enough resistance in the hinge now to stop the door from swinging shut by itself.