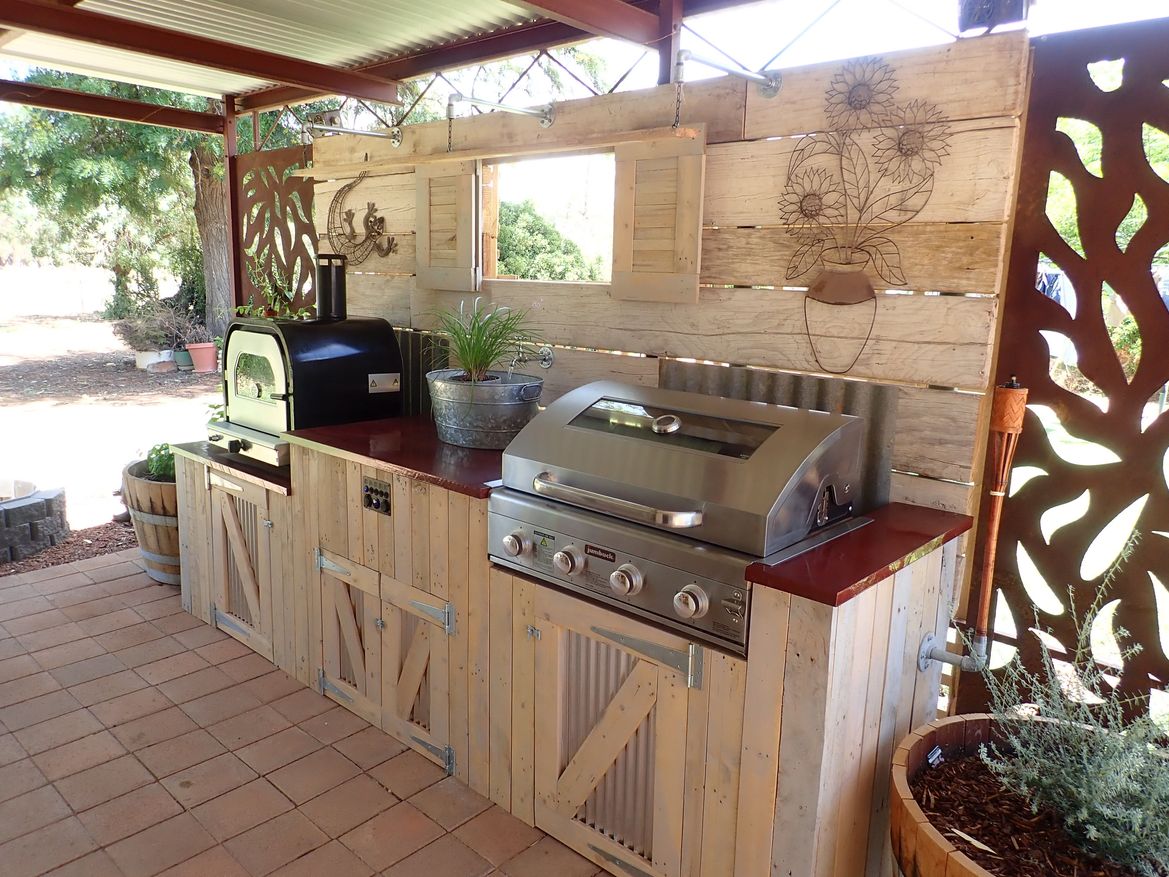 After returning from a couple of years travelling abroad just in time for the world to shutdown, I was going crazy and needed a big project to keep me going. I moved to a small town in central NSW, to the place my mother grew up and has many special memories for me holidaying here. The house hadn't been lived in for over six months, and needed a lot of work. Luckily I will give anything a go so was up for the challange.

The biggest shock moving from western Sydney, apart from the septic tank, tap water straight from the river, only satellite free to air tv, and the closest petrol station 27km away, was the nearest Bunnings being a 1hr 45 min drive away. There are two in Penrith, and at least another 4 or 5 within half an hour. I usually don't make detailed plans and just wing it as I go, but not being able to pop into Bunnings means I had to change my ways. 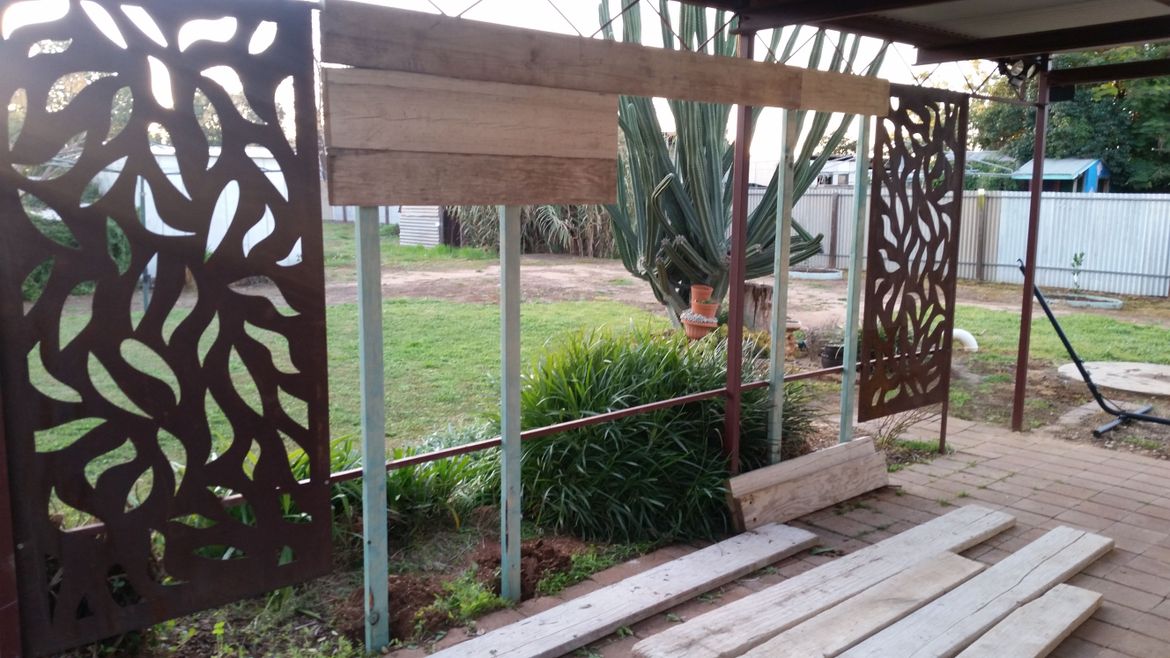 The first few months I was backwards and forwards to Sydney, and got a lot of free timber I found on the internet. The wall of the bbq area was scaffolding boards, and the outside of the bbq was pallets. The iron sheets were in the backyard here. 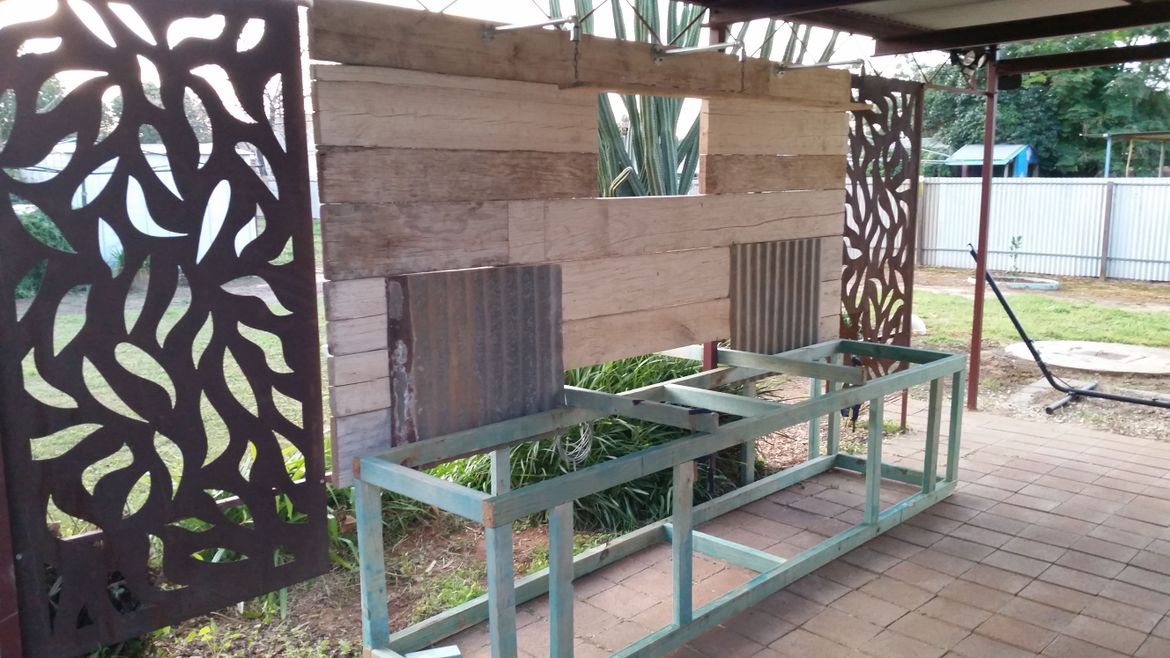 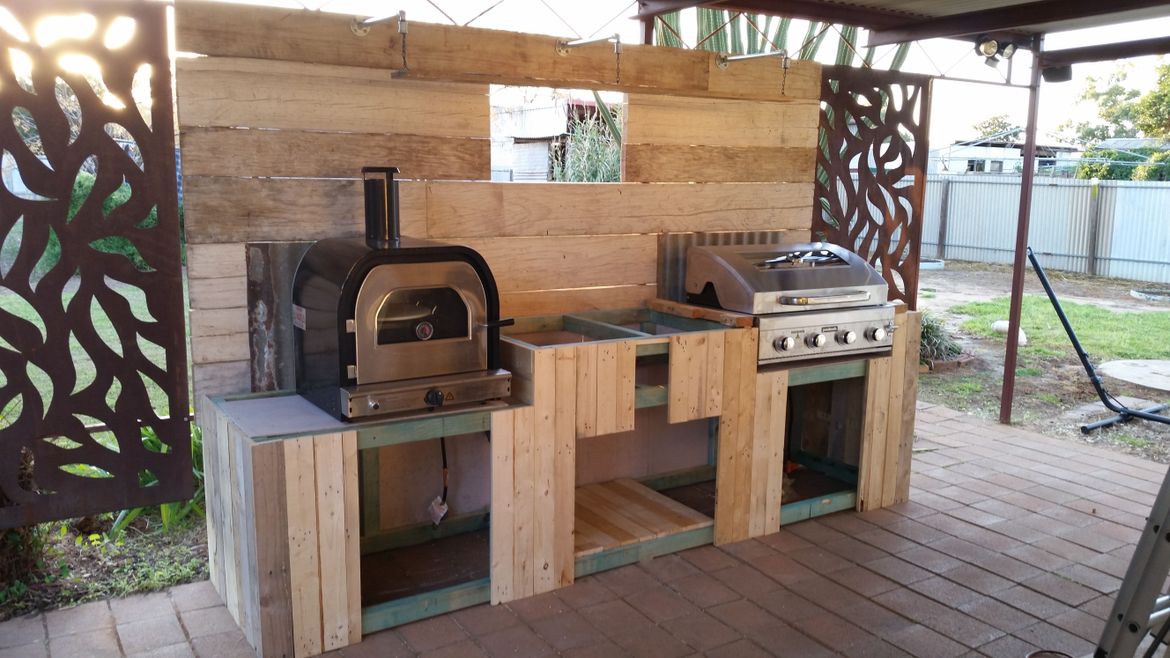 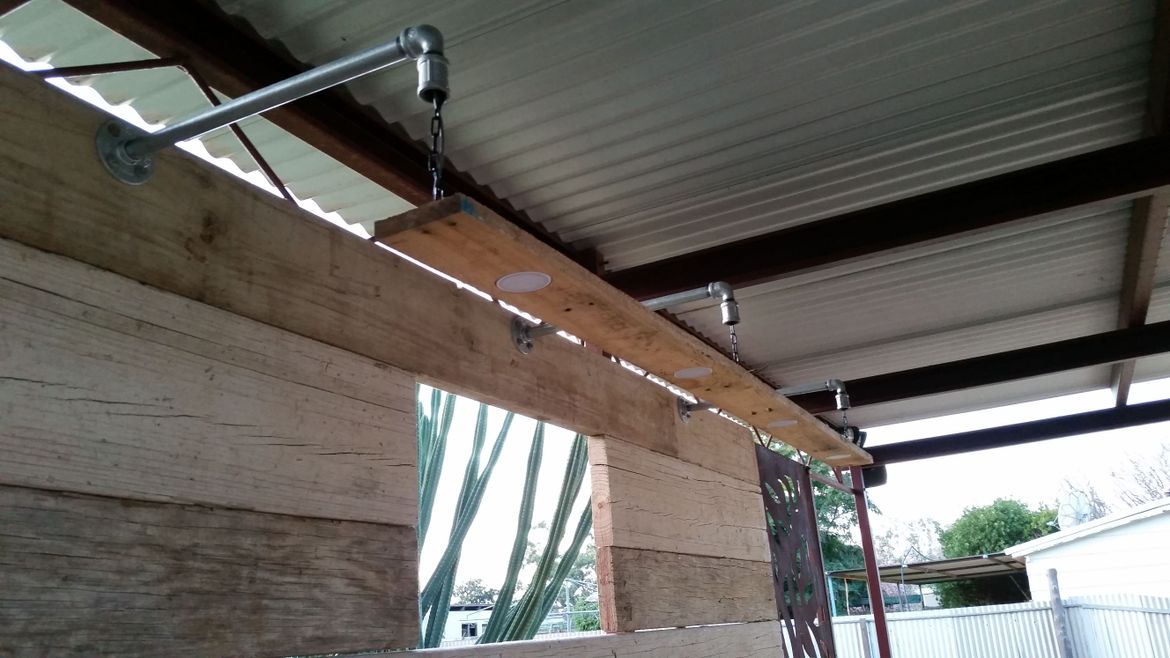 I have a couple of camping solar panels and batteries, and after some searching on the net found a 12v bluetooth amplifier, so I have a strip of lights over the bbq, some over the table, and some fairy lights, along with a water feature and the amp for music or podcasts. The lights are Arlec 12v puck lights. 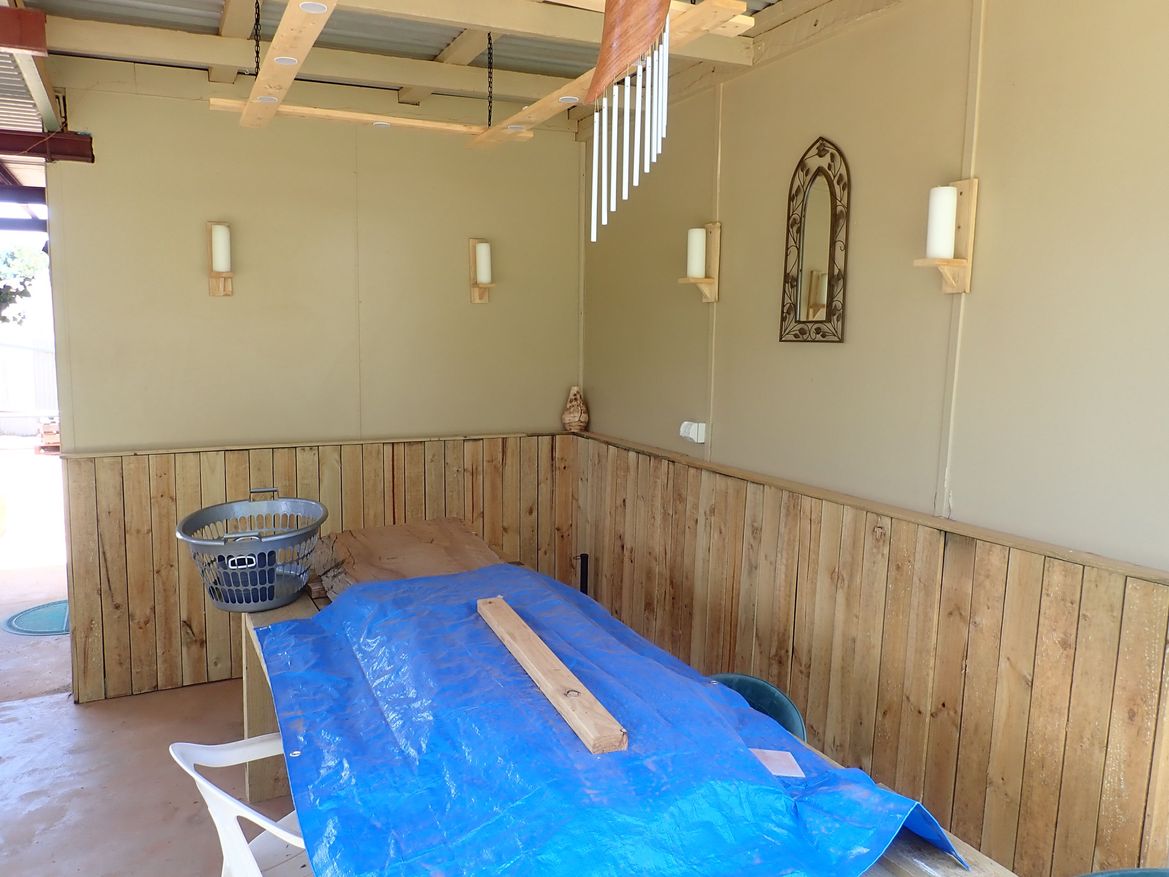 The fibro around the seating area wasn't great, so instead of playing around with it I made a treated pine frame and covered it in with fence palings. 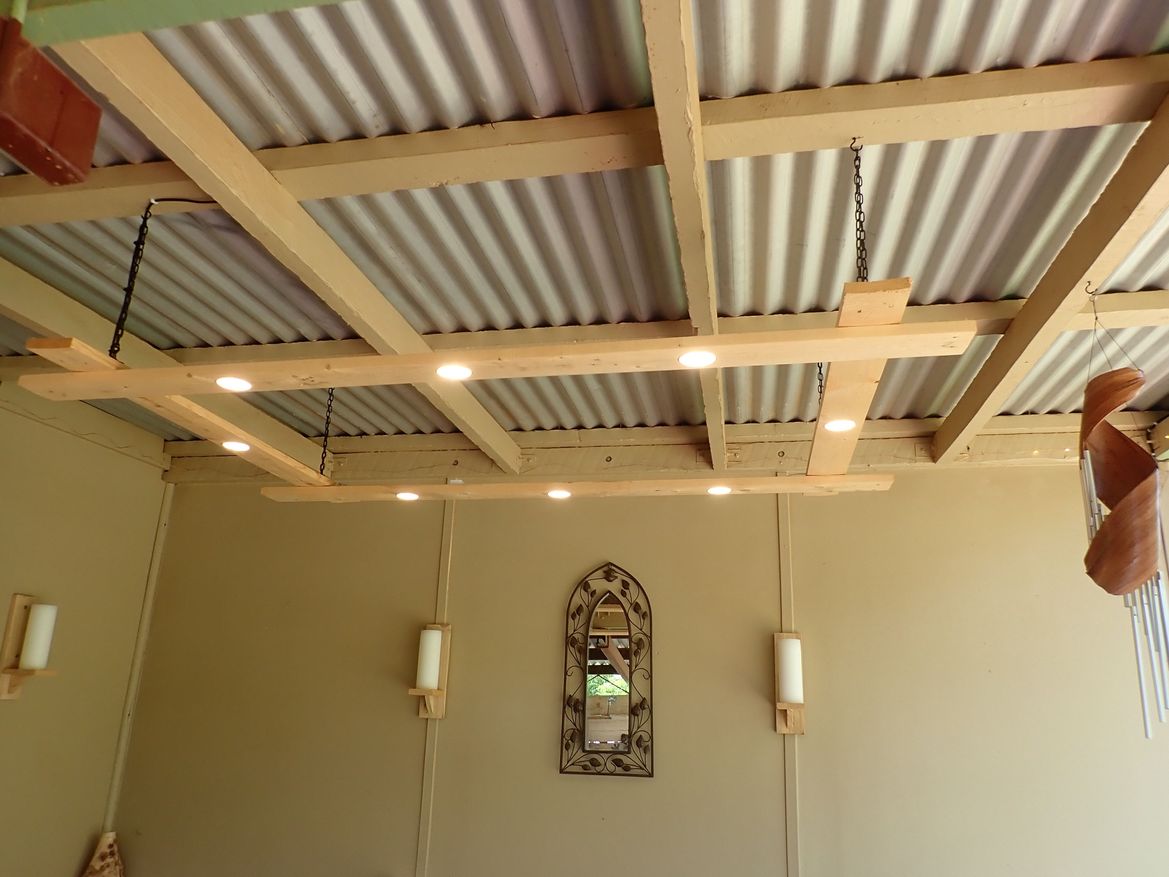 My trip to Iceland got me into Vikings, so used a pallet for my shield, and made a dragon throne.

I can still easily remove the battery to take camping, and easily access the reservoir for the water feature.

And on a recent trip I to Bunnings I found some roller blinds the exact size I needed reduced to clear, so I'll look at a wall heater for next winter and they should help keep the heat in and wind out. The fire pit is retaining wall blocks with sand and scoria in the bottom. 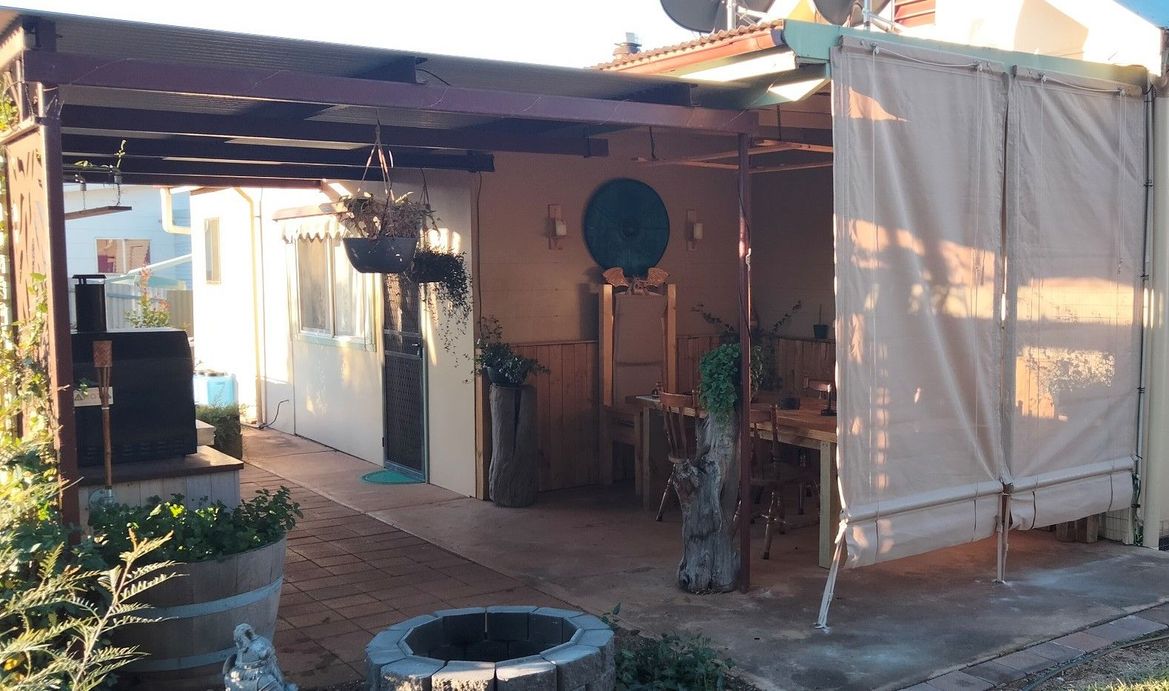 Now I just have to wait until people are allowed to come and visit.😀

Hope this inspires someone to makeover their boring backyard. I've some other projects I'll add later. Cheers.

Welcome to the Bunnings Workshop community @sideshowmatt. It's wonderful to have you join us, and many thanks for sharing such a magnificent first project.

You've really done a fantastic job creating a unique space. I absolutely love the Viking inspired elements. Did you make the dragon yourself?

I can't wait to see what other projects you've been up to. If they are anywhere near as impressive as this one, I'm sure we'll all be absolutely amazed.

Thanks once again, and it's great to have you on board.

Thanks Mitchell. I made the dragon with a scroll saw and a Dremel, then used a pyrography tools for the colour.

Am very happy with this as a first attempt at something like it, and can't wait to build a proper workshop so I can have more space to take my time on projects instead of having to pack up every day.

You should be very proud of your efforts @sideshowmatt. You're extremely talented and definitely deserved of a workshop to build your projects within.

I wish I wasn't so useless. I would love to be able to do something amazing like this.

Welcome to the Bunnings Workshop community @Rowdy1961. Anything is possible with a bit of inspiration and enough willpower.

Why not create a discussion with some images of your space and list out what you'd like to achieve with it. I'm sure our amazing members will have plenty of helpful advice and encouragement for you. With our assistance, you'll turn that useless into useful and be creating projects like this in no time. Well, maybe not that dragon. I think some of our most skilled work workers might have trouble with that. I know I would.

Keen to assist you in any way possible. Give us a shout whenever you need.

"I moved to a small town in central NSW"

"and the closest petrol station 27km away"

Curious to know where you are - but don't tell me if you then have to kill me!

This is the most rustically beautiful entertaining area I have seen on the site @sideshowmatt , I'm looking forward to seeing your next projects. Hope you are ready with the Mead and Venison for when your visitors arrive and see this.

I'm in Euabalong. I've been coming here my whole life as my Mum is from here. So quiet, a huge change from Sydney's west.